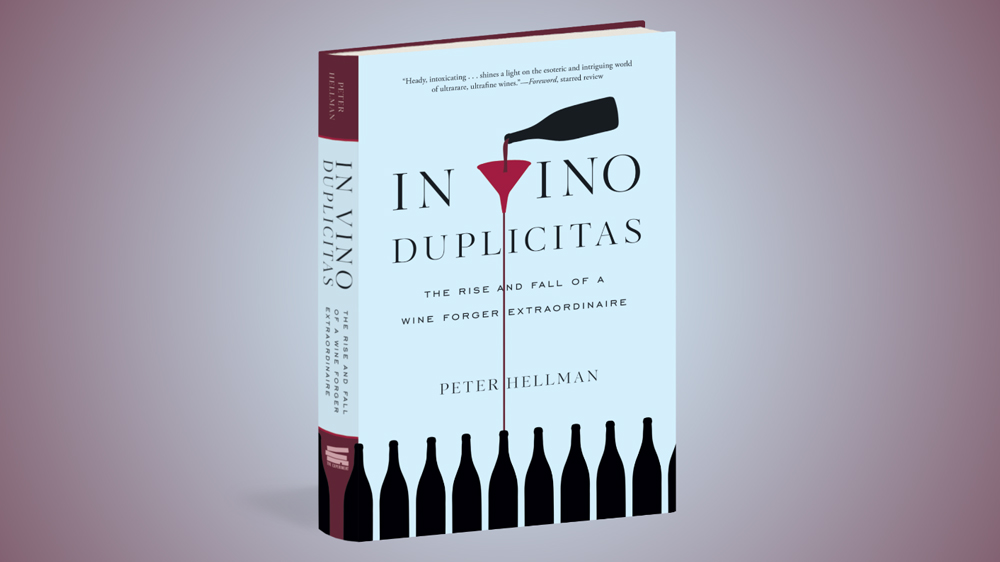 At the outset of the 21st century, the biggest player in the rarified world of ultrafine wines was a twentysomething Indonesian immigrant named Rudy Kurniawan. After bursting onto the scene in 2002, Kurniawan spent 6 years buying and selling the previous century’s most storied vintages. By 2008, however, questions began to arise about the authenticity of Kurniawan’s precious wines, prompting a federal investigation that would ultimately expose one of the biggest cons in the history of luxury goods.

In his new book, In Vino Duplicitas: The Rise and Fall of a Wine Forger Extraordinaire, journalist Peter Hellman lays bare all the essential details of this captivating true-crime story and explores the alarming legacy of a first-rate fraud.

Rudy Kurniawan is an extremely gifted taster. Could he have pulled off a scam of this magnitude had he not been so attuned to the wine?

Collectors, critics, and even Burgundian winemakers who tippled with Kurniawan all agreed that he was a gifted taster. He excelled at blind tastings. Put a dozen glasses of unmarked wine in front of him, and he was known to identify 10 of them by sniff and sip alone. And that really was the start of his scam. People were eager to buy supposedly ultra-rare wine offered by a guy who had such good tasting chops.

How is it that so many people who should have known better convinced themselves that these too-good-to-be-true wines were authentic?

Kurniawan fooled not only amateur collectors but also important critics such as Alan Meadows, aka Burghound. In theory, they should have known better. But wine can be hugely seductive. In a happy environment, it often becomes what you want it to be. I once tasted a hyper-rare Kurniawan wine, labeled as 1928 Chateau Pétrus, in magnum. I was bowled over by its richness, mellowed by so many decades in bottle. Was it real? Probably not. But at the moment I savored it, I believed. As Alan Meadows says, when wine fuels good cheer, “Nobody wants to kill the buzz.”

What’s the most reliable way for collectors to steer clear of counterfeit rare wines?

One straight-on question can keep would-be buyers of purportedly rare wine from being scammed: What is this wine’s provenance? Bottles from long-ago vintages don’t materialize out of nowhere. Ideally, the seller should provide purchase receipts—or, at the very least, provide a plausible history of where the wine has been kept and under what conditions. All reputable auction houses allow prospective bidders to inspect the lots being offered prior to sale, but very few do it.

Why did so many of the people Kurniawan scammed decline to testify against him?

If you’re a business hot shot, it’s acutely embarrassing to be hoodwinked by this very young guy from Jakarta, Indonesia—not exactly a major source of great French wine. The only billionaire victim who stepped forward to testify at Kurniawan’s trial was Bill Koch, one of the four Koch brothers. He came up from his home in Palm Beach to testify. Other victims, who lived a taxi ride away from the federal courthouse in Manhattan, didn’t do as much.

Winemaker Laurent Ponsot did testify against Kurniawan and said his purpose in doing so was to “wash clean the integrity of the terroir of Burgundy.” Do you believe that’s happened, or has Kurniawan done irreparable harm?

Laurent Ponsot has been a true hero in the struggle against fakery of the finest Burgundian wine. At first, other winemakers were not so interested in joining the fight. If certain wealthy Americans were paying huge prices for wine falsely labeled with their domaine names, well then, tant pis—too bad. Ponsot changed that way of thinking. He said, “I never want anyone to uncork a bottle that has my family’s name on the label and be disappointed because it is fake.” Today, the top domaines in Burgundy, just like the top chateaux in Bordeaux, have adopted sophisticated anti-counterfeiting measures, which will cut way down on fakery.

You wrote that there “was a little bit of Robin Hood” in Kurniawan. What do you mean by that?

There was indeed “a little bit of Robin Hood” in Kurniawan. He was an extremely generous tipper at restaurants—sometimes thousands of dollars at a single meal. At the Manhattan restaurant Cru, where Kurniawan hosted crazy wine dinners that went on long after regular closing time, even busboys vied to work deep into the night. They wanted their share of those big tips. Kurniawan also was generous to charities such as Citymeals on Wheels and Project Angel Food.

What happened to Kurniawan’s wine when he went to prison?

At the time of his arrest in March 2012, Kurniawan was storing more than 6,000 bottles in a commercial warehouse. Many of those bottles had been bought from legitimate dealers and were real. Many others were not. The U.S. Marshals shipped all the wine in refrigerated trucks to an auction house in Pflugerville, Texas. There, expert consultants hired by the Marshals carefully separated the real from the false. The real wine was sold off in an Internet auction for almost $1.5 million. The fake stuff was put under a giant crusher. The juice that ran off was fed into a steaming composting pile. The shattered glass was ground up into tiny nuggets that were sold as decorative gravel at a garden shop. Home gardeners will never know that the shiny stuff under their rose bushes was once the false glitter of the wine world.