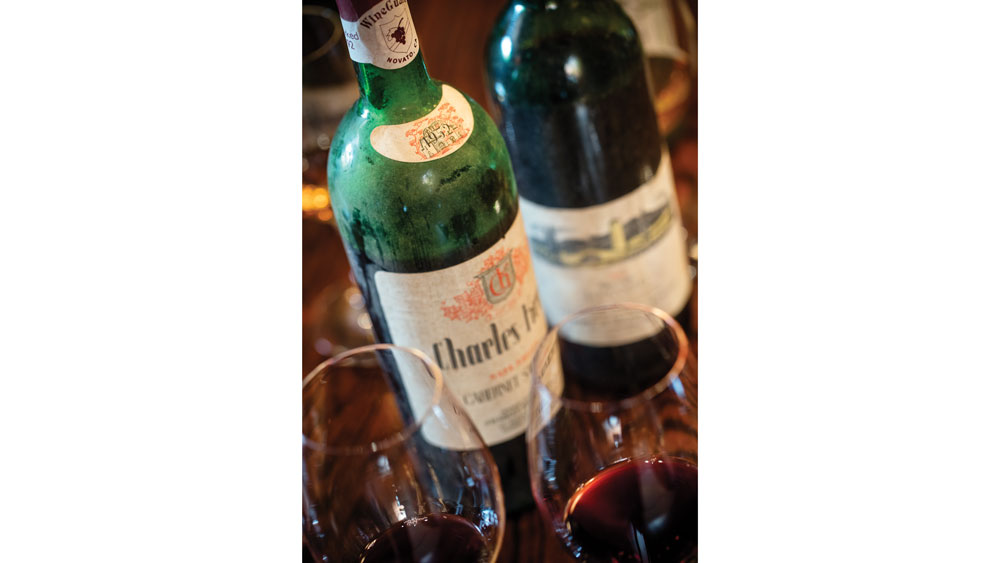 As the eldest son of Napa Valley winemaking legend Robert Mondavi, Michael Mondavi became a collector of bottlings both magnificent and mundane almost by default. “I had the luxury of growing up 100 yards from the Charles Krug winery,” says the vintner, referring to the historic property his grandparents Rosa and Cesare Mondavi purchased in 1943.

“Then in 1965, my senior year in college, the infamous battle between my father and my uncle came to a head, and we were out. All that my father had of the Charles Krug cellar would fit in the trunk of his car. After we started Robert Mondavi Winery, I wanted to have some older vintages, but they were only available at the Napa Valley Wine Auction [now Auction Napa Valley], and so I put my hand up and froze my elbow and bought a number of cases there.”

Mondavi’s determination to reacquire a portion of his family’s history persisted, and today, the vast cellar beneath his residence contains examples of most—if not all—of the vintages produced during his father’s tenure at the winery, including 1944 (the Mondavis’ first vintage), 1946, and salient years from the 1950s and 1960s. This endeavor naturally led to his acquiring some older vintages from many of the wineries owned by family friends, such as Beaulieu Vineyard, Louis M. Martini, Inglenook, and Concannon. Today he owns one of the most compre-hensive collections of Napa Valley wines from those decades. But his taste for nostalgia proved educational, as well. “My father was always focused on how to make wines that could compete with and belong on the table with the great wines of the world,” he says. “This meant Burgundy and Bordeaux. And so I started collecting those, as well, to see how ours stood up.”

Michael Mondavi’s cellar in Napa Valley is a place for him and his guests to experiment and explore.  Photo: Jason Tinacci

This hoard of historic bottles also enabled him to dispel prejudices relating to the age-worthiness of California wines, which many notable critics had long dismissed. “On one occasion in the late 1970s, the English critic Hugh Johnson was visiting my father and me and tasting a few wines with luncheon,” Mondavi recalls. “His comment was, ‘Gee, it’s too bad that California wines don’t age well like Bordeaux.’ Being a young kid at the time, I said, ‘What are you talking about?’ So I brought up a few of first-growth Bordeaux along with a Georges de Latour Private Reserve Cabernet and a Charles Krug Vintage Select—a 1958, I think—and we pulled the corks and tasted them before dinner. Johnson shook his head and said, ‘The reason I had that opinion is because everybody drank all the good wine before it could get old.’ ”

The collection includes many of the best vintages from the Mondavi family’s own wineries.  Photo: Jason Tinacci

Mondavi’s passion for preserving the valley’s liquid legacy, however, is not the only motive informing his collection. His access to these venerable vintages enables him, as a vintner, to better understand how ripeness and extraction affect a wine’s longevity. “I’ve found that it’s not how big a wine is that determines how long it can age,” he explains. “The balance of a wine—the tannin, the body, the acidity, the layers of flavor—are more important. The year 1974, for example, was great for Napa. If you look at the Reserve Cabernets of BV or Inglenook or Robert Mondavi Winery, those were bigger than the Napa Valley designates. During the first 15 years, I thought the Reserves from ’74 were the ones. But the Napas are the more enjoyable today because they were leaner and more balanced. And that, to me, is the advantage of having a cellar with multiple decades: You can go back to the same parcel of land over the past 20, 30, or 40 years to understand how the wines have changed.”