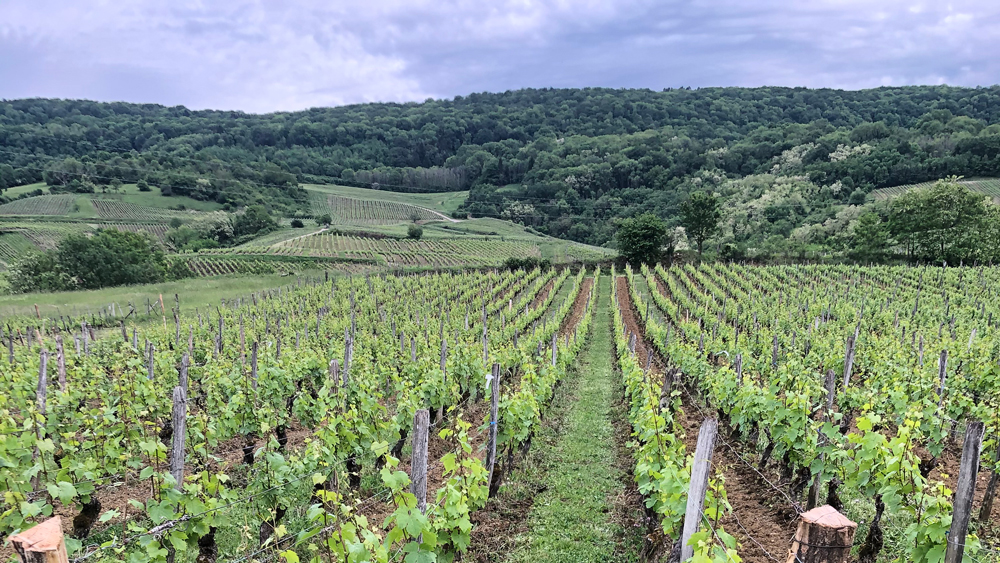 Benjamin Benoit took over his family’s farm and winery in 2019. His father had passed away unexpectedly and left to his son just a little over 15 acres of land in Pupillin, a village in France’s eastern Jura region. Benoit returned home from winemaking work in neighboring Burgundy to tend to the vines, some of which were planted by his great-grandmother in 1938, and he didn’t waste any time changing how his family’s grapes—Ploussard, Trousseau, Pinot Noir, Savagnin and Chardonnay—were handled and vinified.

In particular, with his Ploussard, a thin-skinned red grape known outside of Pupillin as Poulsard, Benoit made five single-vineyard cuvées, rather than combining all the juice into a house label as his dad, and most of the region’s producers, would have done.

“If my dad were here, he just never would have understood that it was possible. My dad never spoke English. He never traveled, and he just had it in his mind that Jura wine is a bottle for €6 to sell to the people who live here,” says Benoit, who turned 26 this year. “But now, there are big possibilities, and that changes everything.”

The possibility he’s referring to is the growing demand for wines from Jura, fueled by generational shifts in winemaking, drinking, and collecting—plus “skyrocketing” prices for Burgundy, according to Thatcher Baker-Briggs, a private wine consultant in the Bay Area, whose clients include venture capitalists, tech founders and NBA players.

Tracking down rare and exceptional wines is a full-time job for Baker-Briggs, and finding those bottles has never been harder, especially with the proliferation of online resources, Instagram famous wines and young drinkers diving into the high-end wine market.

“There’s no way it’s slowing down because you’re dealing with limited products. It’s the way the weather is working right now. There’s frost. There’s rain. There’s extreme heat. It’s a very challenging time for winemakers,” Baker-Briggs says. “The 2019 vintage was very small, 2020 was small, and 2021 is looking like it’s almost nonexistent for certain regions of France. Supply is going down.”

In response, Baker-Briggs says young collectors are becoming more selective. Rather than amassing 50,000 bottles, they want a few thousand of the world’s greatest wines, and they’re looking beyond Burgundy to places like Champagne, the Rhȏne Valley and Jura. More established collectors are also paying attention to up-and-coming producers like Benoit.

“Some of the 50- and 60-year-old collectors, they’re starting to hang out with people like me and younger guys. They’re being introduced to a newer generation of winemakers, and now they want those wines,” Baker-Briggs says. “So what they’re doing is selling off a pretty big portion of their collections to make room for some of the exciting stuff being made today that wasn’t available 10 or 15 years ago.”

The prices Benoit can fetch for his wines were once reserved for grand crus and unthinkable in Jura, a tiny appellation of only 4,500 vineyard acres. If Bordeaux is the Napa of France—with grand chateaus and Rolls Royces parked behind their gates—Jura is the opposite. Anchored by the city of Arbois, it’s an agrarian region with more fields devoted to cows, whose milk goes into Comté cheese, than grapes. Most producers don’t have tasting rooms, and visitors are often welcomed into family dining rooms and cellars (that is, if anyone is home when guests arrive).

Like nearby Burgundy, Jura has pockets of limestone soil that are ideal for Chardonnay, Pinot Noir and the region’s Trousseau grape that can produce dark, fruity, high-acid wines. But Jura has a greater diversity of soil types, including several compositions of clay-based marle, in which native varieties of Ploussard and Savagnin thrive.

On his own farm, Benoit has vineyards with northern, southern, eastern and western exposures (Burgundy’s hills mostly face east) and an altitude that ranges from 250 to 400 meters. “As a winemaker, you have everything, plus five different grape varieties, so you can play with that,” Benoit says.

Jura has long been known for its oxidative whites; to make bright, citrusy, yeasty and nutty Vin Jaune, Savagnin must rest in barrels for a minimum of six years and three months with no top-ups to ward off oxygen. There’s also sous voile, or no top-up, Savagnin and Chardonnay that ages for three to four years in the barrel. (White wines aged more conventionally without oxygen are labeled ouillé.)

As a rule, the region’s oxidized wines age well. Vin Jaune is “indestructible,” according to Baker-Briggs. “They can live for 70 to 80 years.” Otherwise, Benoit says that age-worthiness of Jura’s wines depends on the producer, aging method (barrels vs. stainless steel), and whether there’s added sulphur.

As demand and prices rise—and young winemakers like Benoit take over family operations—there are additional resources and fresh ideas that will lead to more high-quality and age-worthy wines. Even in France, Benoit says that wines from Jura were often relegated to seasonal winter drinking, paired with bold, melted cheese. “Now, you see that sommeliers from Michelin-starred restaurants want to have wines from Jura on their lists.”

Before 2019, only three people worked the fields of Cellier Saint Benoit: Benoit’s father and grandparents. Now, there are seven to eight workers and tangible labor costs. Benoit’s team deleafs vineyards by hand. He transports grapes in small cases rather than giant bins in which the berries can easily bruise. He has switched to whole cluster fermentation for Pinot Noir and Trousseau, and he’s destemming Ploussard by hand in the field, which keeps grapes intact for whole berry fermentation that preserves the grapes’ freshness and fruit character.

“We’re more clear about our intentions in the vineyard,” says Benoit. “And it has changed the quality of the wines.”