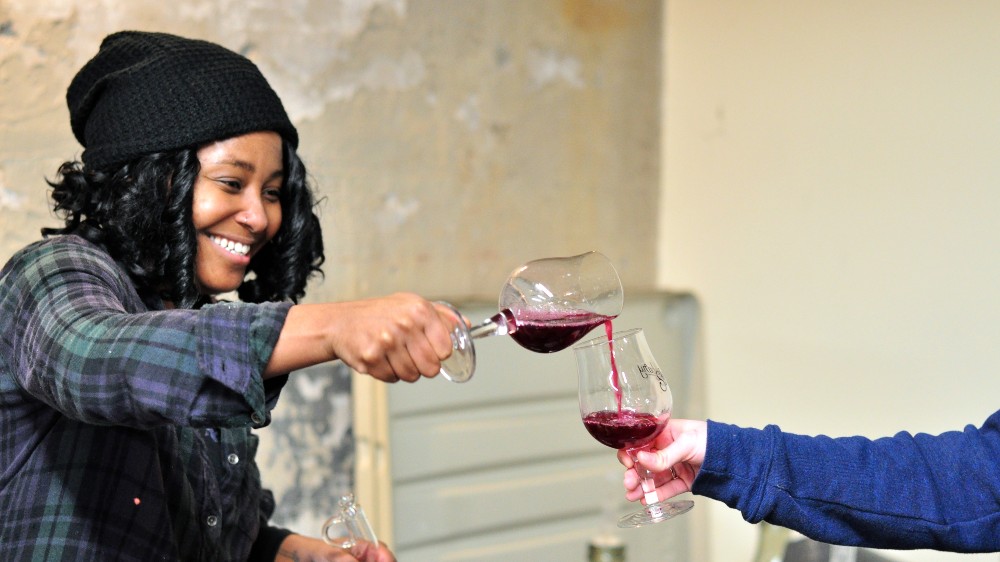 A few years ago, while Krista Scruggs was working for one of the biggest conglomerates in the wine business, she had a realization. “The FDA would allow you to add up to 300 additives [to wine],” the 33-year-old vigneronne recalls of her days at the company, which used artificial enhancements to alter both the look and taste of wine. It was an unwelcome deviation from what Scruggs considered to be the natural process of winemaking. At the mass-market level, “wines were being made in a lab,” she says. “Not in the vineyard.”

That’s not the case at Zafa Wines, Scruggs’s biodynamic winery in Vermont. Just a year old, it’s making waves not for its cutting-edge innovation, but for its throwback methods: There’s no fining or filtering, no herbicides or pesticides, and no additives. “Just f***ing fermented juice from responsibly farmed living fruit,” Zafa’s website so eloquently states. Scruggs even crushes her grapes the old-fashioned way: by foot, a method she learned while intern-ing with Vermont’s game-changing winery La Garagista. “It’s softer on the seeds, so they don’t crack and impart a flavor you typically don’t want in wine,” Scruggs explains. “It’s also about being more gentle on the fruit itself.”

“I believe if there's any kind of God it wouldn't be in any of us, not you or me but just this little space in between. If there's any kind of magic in this world it must be in the attempt of understanding someone sharing something. I know, it's almost impossible to succeed but who cares really? The answer must be in the attempt.” - before sunrise #zafawines #beforesunrise #forcassidy #justfuckingfermentedjuice #farm #forage #ferment 📸 by @_annatravers

Scruggs’s affection for the fruit is no surprise given her background. Raised in California, she comes from an agricultural family: Her grandfather operated a farm in the San Joaquin Valley, and she grew up working on it on the weekends. But the climate and cost of land in her home state don’t yield the kind of wine she wanted to produce: affordable wine for people who, like her, are “concerned about what they’re putting in their bodies.” So she left the land of Chardonnay and Cabernet Sauvignon for central Vermont and adopted the motto “farm+forage+ferment.” When her first vintages were released in 2017, that motto was self-evident: Made with fruit sourced throughout Vermont (including grapes from La Garagista’s Vergennes Vineyard), her wines and ciders are vibrant—like tasting an organic strawberry for the first time after a lifetime of pink Pop-Tarts. The first vintages included an acidic pétillant-naturel (a sparkling white made from La Crescent grapes) and a Frontenac Noir that’s cofermented with apples (which Scruggs helps forage) for a vinous cider that’s true to Vermont’s terroir. In keeping with Scruggs’s own character, meanwhile, are the saucy names she’s given her creations: Against All Odds, No Love Lost, and Jungle Fever among them.

When Scruggs debuts her 2018 vintages this month, you can expect more of the same—including the lightning-fast sales that sold out 2017’s releases. To address the demand, she’ll also be slowly ramping up production; she is now planting her own first vines on roughly 10 acres to yield an eventual 2,000 bottles per year. Yes, Scruggs admits, that number is still “really, really, really, really small.” But it’s worth it to make wine her way.