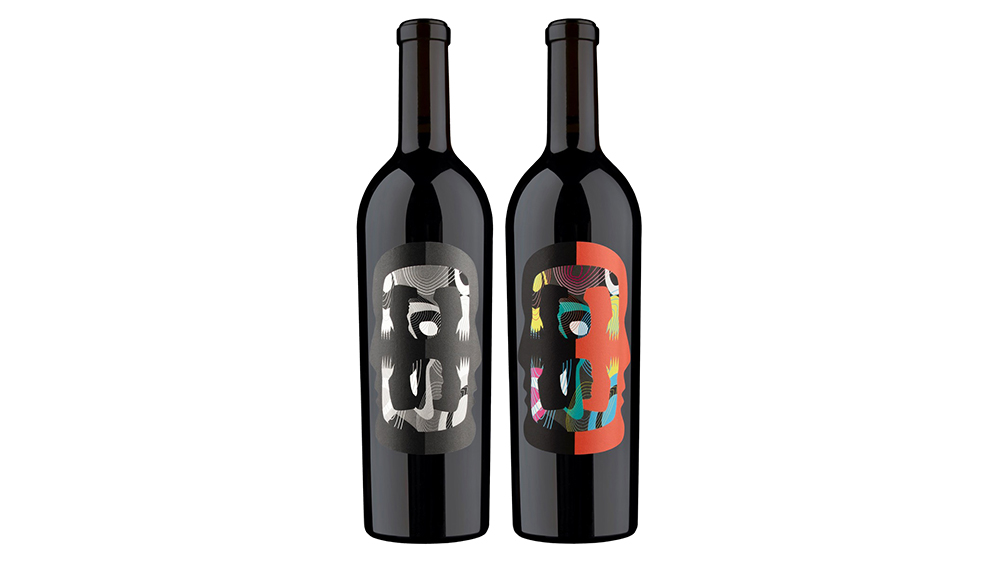 When the appellation on a bottle of red reads “California,” you expect a splash of Lodi, and maybe Mendocino, Lake County, the Sierra Foothills. . . all regions capable of producing terrific wines on their own, but in this hypothetical bottle, they don’t get to. The character of those splashes is flattened by their job of subtly boosting the profile of the sea of Central Valley juice anchoring the “California” blend, which is generally forgettable (and cheap). But with their new Les Cousins 2019, Patrice Breton of Napa’s Vice Versa and Stephan Asseo of L’Aventure in Paso Robles have flipped the script on multi-regional blending. The two friends, who share a language—Breton is from Quebec, Asseo from France—and a love of winemaking that reflects “minimalism, classicism and authenticity,” according to Breton, as well as “a high-end viticulture approach,” adds Asseo, have co-mingled their Napa and Paso Robles Cabernet Sauvignons. The result? Prepare to ditch your reference points.

Considering the risk of losing the renowned regional identity that both Napa Valley and Paso Robles have paid dearly for, it’s fair to ask: What were you thinking? Well, says Asseo, “after drinking a bunch of bottles one night at my house, Patrice became inspired and ended up with this idea—and perfect name.” (The French and Québécois often call each other cousins, according to Breton.) But there are more serious layers to their answer too. “Similarities and contrasts,” Breton says. “One could argue that Napa and Paso are also cousins, as both regions are at similar latitudes in California, separated by only 250 miles. While Paso is known more for Rhône varietals, it also produces world-class Cabernet Sauvignon. Both Stephan and I thought it would be interesting to explore a collaborative project. The process was fluid and natural.”

Asseo unpacks their reasoning further: “You have two approaches, or philosophies, to producing wines. The first is to say that you have a very specific terroir and you want to keep it straight to express its specificity. The second, which is my personal approach when possible, is to take advantage of the diversity and complimentary traits the terroir brings, to make a wine that is even more original, complex and in the end, better.”

Indeed, it’s difficult in their Les Cousins 2019 to identify discrete markers for Napa or Paso Robles Cabernet; the wine is remarkable in a lane of its own. A gorgeous gamut of aromatics cascades from the glass—high-toned florals leading in dark, vivid fruit, which gives way to exotic spice and a lovely crushed-rock minerality. On the palate, dense, generous fruit leans toward black raspberry, mulberry, fleshy dark plum and classic black currant, with structure and texture that seem at once muscular and velvety, as considerable complexity unfolds—more of that fascinating warm spice and earth lingering through a finish that’s both vibrant and rich. There’s California ripeness here (shared by Napa and Paso), but also a breadth of character that neither region might easily deliver on its own.

Citing the Right Bank Bordeaux model of adding some good Cabernet Franc and a touch of Cabernet Sauvignon to beautiful Merlot and ending up with a more balanced, complex wine—capable of giving more pleasure—Asseo describes the contributions of the Les Cousins components. “I think the L’Aventure Cabernet Sauvignon brought some brightness, vivacity and a touch of muscle to the beautiful textured silkiness and softness of the Vice Versa Cabernet.” Breton layers in the details. “Stephan’s Cabernet Sauvignon vines sit on a hillside of siliceous and calcareous shale with clay, metals and quartz in the Willow Creek AVA,” he says, “and his wine brings striking minerality, finesse, density and freshness to the blend, while Vice Versa’s components offer a seductive quality with abundant fine ripe tannins, rich aromatics, and flavors.”

Drinking wine together one night gave them the idea for an uncommon California blend.  Les Cousins

The exchange between the two passionate vintners celebrates two of the state’s great Cabernet regions. For his part, Asseo abandoned France to break a few rules (including its strictures for blending). “My philosophy since I left Bordeaux,” he says, “is to make a wine of your terroir(s) where you express a part of yourself, not just wine from one appellation that has more or less the same style.” And Breton predicts more of this top-level defection: “There are no limits to the potential quality and beauty of California wines. And thinking outside the box can sometimes yield some great discoveries.”

The striking labels for Les Cousins—and there are two, designed by acclaimed French artist Tehos Frederic Camilleri—are themselves a study in similarities and contrasts. One is depicted in monochrome, signaling purity, minimalism, simplicity; the other pops with color, maybe a reflection of the character of the “cousins” more than that of their new wine. The latter (only four barrels, 100 cases; $700 for a two-pack or one of a handful of magnums) will be available on May 10 through the Vice Versa and L’Aventure mailing lists. You heard it here first.