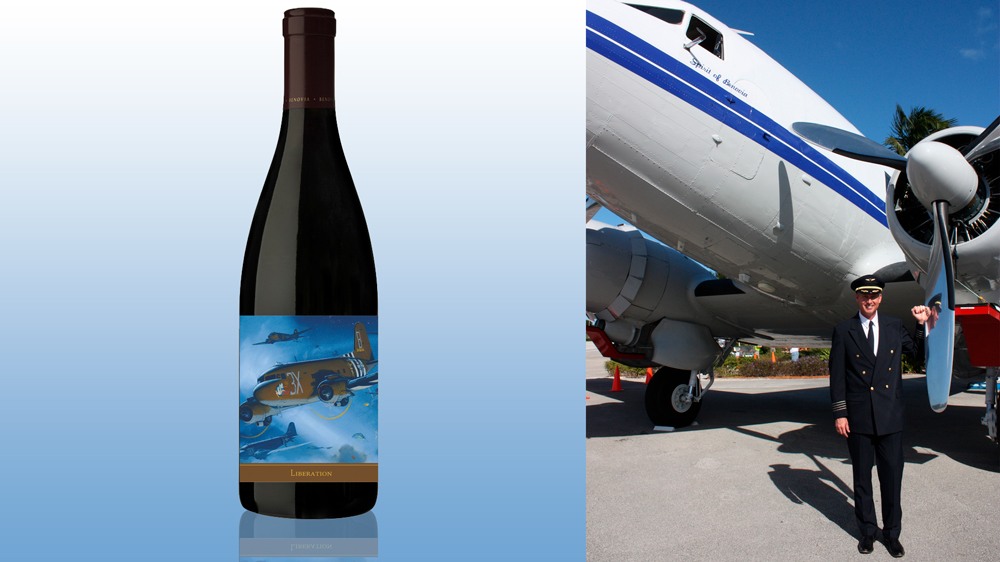 On June 6, 2019, it will be the 75th anniversary of the invasion of Normandy. And while more and more of us can only imagine the courage and carnage of D-Day—the Allied assault that began unraveling Hitler’s hold on Western Europe—through books and movies, Joe Anderson, owner of Benovia Winery, has skin in the game. His father and two of his uncles served in combat in World War II, and he’ll be commemorating their service in two very personal ways.

In 2008 Anderson and his wife, Benovia cofounder Mary Dewane, acquired a C-53 Skytrooper, one of a class of “workhorse” airplanes that played a key role in the Normandy invasion. They named it The Spirit of Benovia. And next year, Anderson and his pilot, Jeff Coffman, will fly the plane back to Normandy as part of a joint U.S. and British aerial commemoration of the history-altering event. The Spirit of Benovia will fly in segments, joining other American aircraft to create a D-Day Squadron, which will in turn rendezvous with a group of British aircraft called Daks over Normandy. With forces joined, on June 6 next year they will cross the English Channel and fly in formation over Normandy.

The Spirit of Benovia itself didn’t fly in the invasion. Launched into service in 1942, it instead supported the Allied Forces against Japan, flying over the Himalayas. Anderson is understandably proud to join the plane with its fellows to celebrate the sacrifices made in the war 75 years ago. “We are so blessed that [my father and uncles] came home,” he says. “It’s important to us to honor everyone who fought for our freedom. This will be a poignant celebration, as there are still surviving soldiers who will be able to join us.”

Benovia is furthering that last cause, too, by doing what the winery is known for doing so well—making a delicious Russian River Valley Pinot Noir. Winemaker Mike Sullivan has produced only 56 cases of Pinot for the occasion, sourced from Benovia’s Tilton Hill Estate Vineyard. Named Liberation, this 2016 was just released ($70), and part of the proceeds will go toward helping veterans, students, and the planes themselves get to Normandy for the anniversary celebration.

The dramatic D-Day squadron depicted on the wine’s label by pilot and artist Craig Kodera both connects the wine to the events and inserts personal poignancy: The nose on the plane in the foreground was inspired by a B-29 that Anderson’s uncle flew in the war.

The wine itself is a veritable celebration in the glass. Perfectly balanced between generous ripe fruit and bright acidity, it opens with lovely earth and spice notes—forest-floor aromas edged with exotic cloves and coriander. Vibrant red berry flavors layer over that spice on a very silky palate.