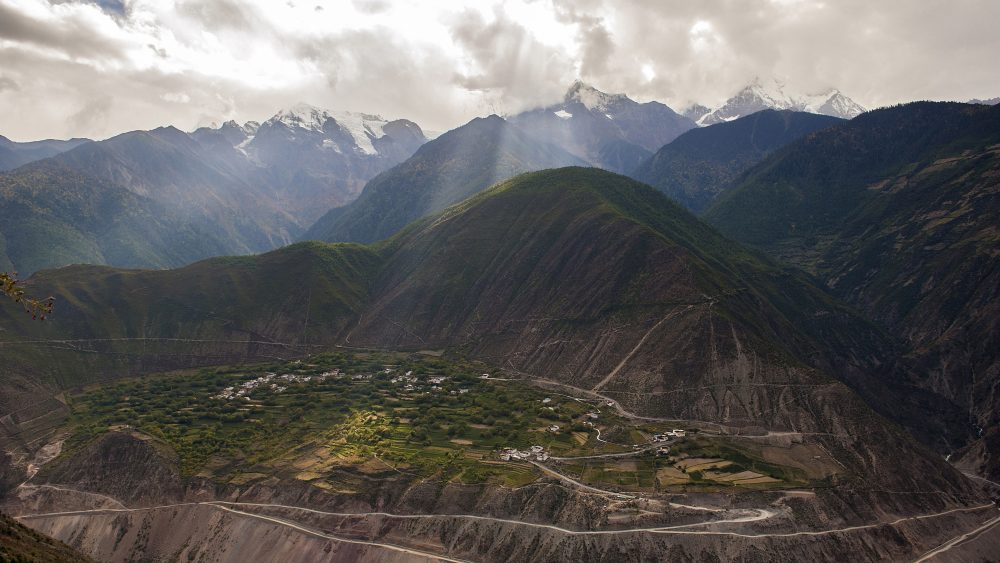 At 8,500 feet above sea level, in the foothills of the Himalayas, the tag “Made in China” is getting a startling new spin. The product in question here, in the northern reaches of the Yunnan province, which borders Tibet, isn’t a factory commodity. It’s a unique luxury item wrested painstakingly from this remote and challenging land itself: wine. Specifically, Ao Yun, which translates to “flying (or roaming) above the clouds.”

China-grown wine isn’t a new phenomenon by any means. A couple of regions—most notably Ningxia and Shandong—are gaining reputable traction for their bottles. But in a warren of more than 300 tiny blocks of vineyards spread among four villages on the steep banks
of the Mekong River, in the southwest of China far from the better-known regions, Ao Yun isn’t taking a slow-growth route to mere respectability. With only two vintages under its belt, the young winery has already garnered critical international acclaim for its Cabernet Sauvignon blend. In terms of price alone ($300 retail), owner Moët Hennessy has positioned Ao Yun in the ranks of bottles from the top Bordeaux-variety-producing regions of the world.

And yet Ao Yun is trying to be nothing like any of those wines. The beverage branch of the French luxury company LVMH set out to find its own unique terroir in China—an increasingly important wine market, now second only to the United States in volume consumption. And the team tasked with the search took its time—four years, according to winemaker Maxence Dulou, a native of France, who has worked in both Bordeaux and Burgundy. “We asked, ‘Can we find it in China?’” he says. “‘Land that will produce fine and elegant wine?’ We sent a 70-year- old man to scout. He was on a mission, and we knew we needed to be brave and confident that we could do this.”

Winemaker Maxence Dulou seeks a clear taste of the Himalayas in a French-style Cabernet.  Courtesy of LVMH

That man was Tony Jordan, a consultant who spent more than 20 years as a Moët Hennessy winemaker and executive. In 2011, Jordan found the spot, a four-hour drive from the city of Shangri-La (now more than just a figment of James Hilton’s imagination in the 1933 novel Lost Horizon), nestled at the base of the dramatic Meili Snow Mountains. Farmers there were already working steeply terraced vineyards, planted in an earlier venture, in part to give themselves an opportunity to earn more income, in addition to the corn, barley, wheat, walnuts, black pigs and yaks they tend year-round. Even though oversight of the winemaking had been neglected, when Jordan tasted the wine, he knew—given the right expertise—it could be great. (And at the risk of vast understatement, Moët has some serious expertise.)

What Moët didn’t have was experience with the unique challenges of making wine in this corner of the world. The locals might already be skilled vineyard workers, but the French- and English-speaking Dulou was not adept at their dialect. And while the fact that the vineyard blocks here are too steep and small for machine work might not overwhelm a good viticulturist (just do everything by hand, the old-fashioned way), each block, according to Dulou, has its own microclimate in the terraces, some with more wind, all with varying soil compositions. The altitude itself also turned out to be a problem. With 25 percent less oxygen in the air than at sea level, Dulou has found he needs to compensate by providing more exposure to oxygen during the winemaking process. So for the final blending, he takes samples of the different barrels down to sea level.

Still, the terroir was promising. While the latitude in southern China in general might be too warm and wet for wine, the air is cooler at the winery’s altitude. Temperatures, in fact, are similar to those in Bordeaux. And diurnal swings—the contrast between daytime and nighttime temperatures—are huge, the colder nights allowing the fruit on the vines to retain acidity, and the wines, therefore, freshness. As Dulou puts it, “We’re not cooking the grapes.” At this altitude, though, the UV rays from the sun are strong. To protect against sunburn, the grapes develop thicker and darker skins, with the happy result of more color saturation and flavor concentration in the wine.

Then, too, the soaring, snow-capped peaks surrounding the Mekong River valley are good for far more, in winegrowing terms, than vertiginous views and treacherous travel (both of which they offer in spades—an oxygen tank reportedly accompanies all visitors in). The mountains act as a natural rain barrier, forcing the clouds to unburden themselves on the other side, creating dry conditions that minimize the threat of mildew and pests. That makes organic farming a natural choice here. And because the grapes lie in the shadows cast by the mountains early in the day, they get 30 percent less sun in the morning, delaying ripeness and lengthening the growing season. (For comparison’s sake, the time from bud break to harvest here is, on average, 160 days; in Bordeaux, it’s about 120.) This long, slow ripening, during which the decision about when to pick is never rushed, is a winemaker’s dream.

The soils, too, play no small part of the terroir early Ao Yun wines are expressing. According to Dulou, a combination of schist and clay, which have slipped from the mountain slopes, and gravel deposited by the river itself gives the wine a rich and generous mouthfeel and at the same time, structure and minerality.

What he’s looking for, says Dulou, is a clear taste of the Himalayas in a wine that is still unmistakably a French-style Cabernet—something fresh and elegant, without the overripe and jammy fruit flavors once (and sometimes still) typical of New World Cabs. To be sure, the 2014 Ao Yun leaves you flipping through your mental wine inventory for reference points. At 15 percent alcohol, it’s not shy, yet its concentrated flavors and silky textures are never heavy-handed. Substantial time in a decanter opens up layers of savory fresh herbs, tobacco leaf, crushed rock, mushroom, and dry loam under bright red cassis and raspberry fruit. That those layers take time to emerge suggests this wine has great aging potential.

Alexandre Calvi, head sommelier of New York’s DaDong restaurant, the first U.S. outpost of Chinese celebrity chef Dong Zhenxiang, has Ao Yun on his wine list for $488. (For perspective, his range runs from $40 on up to $9,888.) In fact, it’s the only Chinese wine on the list. “This wine is unlike any other,” says Calvi. “As Chef Dong likes to showcase refined food, we have to be the representative of what’s best from China. Ao Yun is that kind of unique product.” (Of course, it doesn’t hurt that the wine goes beautifully with the chef’s legendary roast duck.)

Considering the obstacles—the languages, the altitude, the treacherous four-hour drive from the nearest city, the unfamiliar terroir, even the government (“It’s complicated,” says Dulou, adding wryly, “they’re part of the terroir.”)— it’s tempting to ask: What makes sense about a project in this Chinese eyrie for luxury-oriented LVMH? According to Margareth Henriquez, president of the company’s Krug and the Estates & Wines division, absolutely everything. She cites LVMH’s long history of buying pioneering wine houses around the world, from Chandon Argentina and Napa Valley’s Newton Vineyard to Cloudy Bay in New Zealand. And having spent nearly 30 years heading up multinational companies in Venezuela, Mexico, Argentina, and France (she joined Moët Hennessy in 2001 as CEO of Bodegas Chandon in Argentina), Henriquez relishes that pioneering spirit: She likes getting there first.

Dulou, for his part, is embracing the learning curve, improving on every vintage (2015 will be released later this year) with techniques both modern and ancient. To monitor moisture in the vineyards, he uses a drone for infrared mapping. But he walks the blocks, too. “There’s nothing better than someone coming in person,” he says, “so we do both.”

Dulou is also already experimenting beyond the Cabernet blend for the future. He says he’s planted a little Syrah and an even smaller amount of Chardonnay. In a few years, we might be sipping a superb Rhône-style red or Burgundian white— from the seemingly inhospitable foothills of the Himalayas. He shrugs off the incongruity. “Everything is more difficult in China,” he says. “Also, everything is possible.”