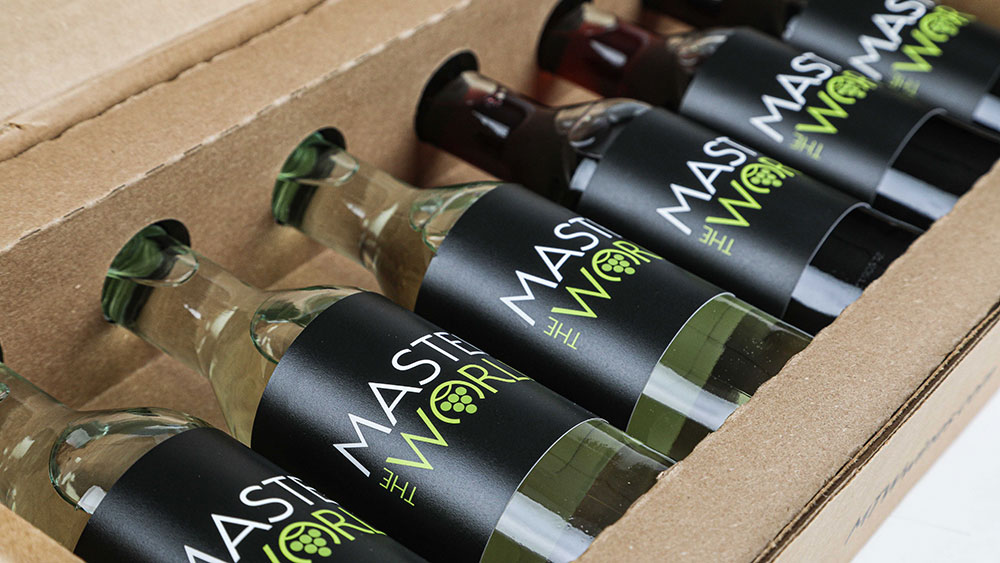 Blind tasting wine—sniffing and sipping with no other information than whether it’s white or red—is humbling. It’s also irresistible. Drilling down through narrow nuances of a wine’s color, aromas, flavors, acidity, alcohol, tannins…to declare confidently that it’s from the Old World or the New—Italy, say, or Argentina; that it’s Nebbiolo, not Malbec; and that it’s a Barolo from 2015 versus 2016 is the legendary struggle of candidates studying for their final Master Sommelier exam. And it’s the private conviction of all other wine lovers that they could nail it, given the chance.

Now there’s a way to find out. Master the World is a monthly subscription blind-tasting kits, newly available to wine enthusiasts with any level of tasting experience (or lack thereof). Each box contains six small bottles (187 milliliters) marked only by numbers—a collection of wines, curated by a panel of Master Sommeliers, that are classic examples of styles, regions and varieties. (They’re in perfect condition because of a proprietary technique for transferring the wines from regular 750-milliliter bottles to the minis under anaerobic conditions.) An interactive companion tasting tool online leads through the wines in each kit, giving tasters the chance to use the Master Sommeliers’ deductive method to evaluate traits, from color, aroma and taste to structure, eventually taking a stand on what the wine is and where it’s from. Subscribers are also invited to join a webinar discussion of the six wines led by three Masters themselves.

Master the World is the brainchild of longtime Master Sommelier and educator Evan Goldstein, and developed with his business partner and CEO Limeng Stroh. What started as a tool for would-be actual Masters to hone their tasting skills on global wines has been expanded for the edification and entertainment of mere mortals as well.

Firmly in the mortal camp—but with enough tasting behind me to bring a little confidence to the table (a little too much, it turns out)—I took my first kit for a test-drive in real time with its webinar hosted by Goldstein, Madeline Triffon and Tim Gaiser, Master Somms all. Each talked us tasters through two of the wines, in the rapid-fire evaluations only Masters are capable of (interrupted by the pretty hilarious banter of professionals having fun with their craft). White wine number two, according to Goldstein, included vegetal aromas I’m not used to thinking of in this context—fennel, mushroom, ginger—plus sea spray, inorganic earth, nuttiness. It’s dry, with high acidity, lean, tart, complex and long. Our choices, when it came time to take a stand, were Albariño, Sauvignon Blanc or Chardonnay from Spain, Portugal, Uruguay or California. I threw in for Albariño from Spain—right variety, wrong place, it turns out. It was Alvarinho from Portugal: Vinho Verde.

Gaiser took over for wine number four, which showed red fruits surprising for its depth of color, a slight green character, mixed oak…I was pretty sure it was a Merlot from Washington (because Merlot can exhibit green vegetal qualities, right?), but this time I had the right place, wrong variety. It was Cabernet Franc from the Columbia Valley. (Of course, Cab Franc can be the greenest Bordeaux of all!) In my defense, I nailed two of the six wines. And in praise of the program, over the course of the Master Somms’ explanations of why each wine wasn’t the other choices given, I came out substantially enlightened about tell-tale characteristics of varieties and regions.