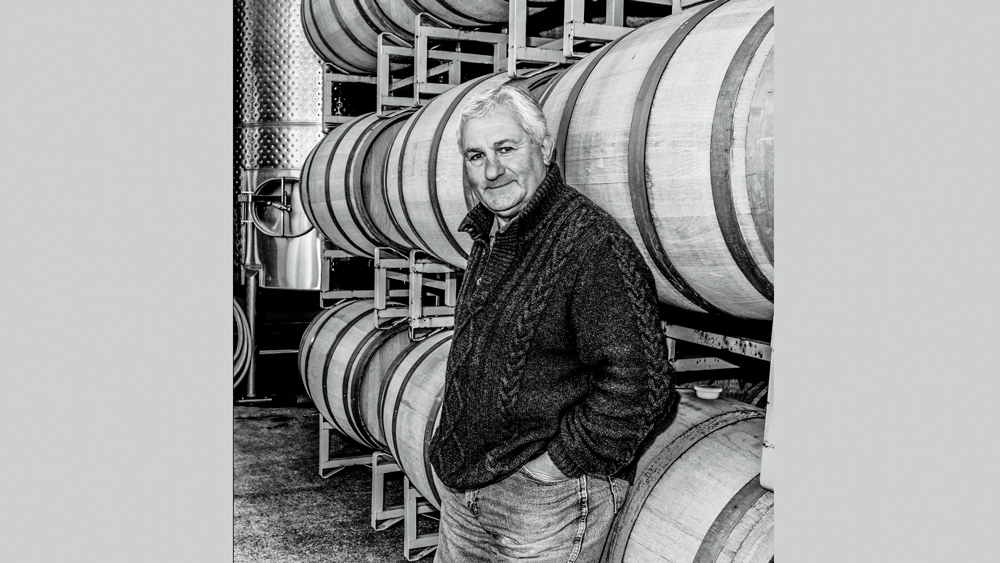 “I don’t need an excuse to open a good bottle of Champagne!” he jokes. But as he celebrates his 50th vintage this year, he can be forgiven a moment of satisfied reflection, for this seventh-generation vigneron—or winegrower—has enjoyed remarkable success. Born in Gascony, Seillan began his career in the Loire Valley and Bordeaux. But his life took a decisive turn in the 1990s, when pioneering vintner Jess Jackson persuaded him to try his hand at crafting a wine in California.

The result was the acclaimed Sonoma County winery Vérité, whose Bordeaux-style blends have been anointed with an unprecedented 13 100-point scores by Wine Advocate founder Robert Parker since the winery’s debut with the 1998 vintage. Seillan’s partnership with the Jackson family has borne other fruit too: Today he divides his remarkable energies between California, Bordeaux, and Tuscany—three very different regions whose distinct climates and soils favor a winemaking philosophy that emphasizes a sense of place above all else.

To mark this major milestone in the career of the indefatigable Frenchman, Robb Report caught up with Seillan to talk about family, terroir, and humility before nature.

The Soul of the Soil

Master winemaker Pierre Seillan, who this year will produce the 50th vintage of his career—which has spanned the United States, France, and Italy—reflects on the harmonious and sometimes harsh relationship between humans, earth, and the vine.

What made you accept Jess Jackson’s invitation to make a wine in California?

It was a simple choice: I immediately understood that Jess and I shared a vision of making wine from quality terroirs. Moreover, it was a chance to do something entrepreneurial and creative; Jess was a great teacher, and at the same time, he gave me a lot of trust and the opportunity to put my ideas into practice. He was very generous but also very serious.

How easily did you adapt to working in the United States?

Professionally speaking, I adapted very well, even though the cultures are very different. When you believe in the notion of terroir, you have to listen to what the soils have to say. I loved Sonoma, with its extraordinary diversity of soils and micro-crus. I have a deep conviction that these sites will be recognized as some of the best in the world.

Has working in California and Tuscany changed your perspective on wine?

It’s only strengthened my conviction that it’s essential to stay humble when you work with nature. Each vintage is different and presents its own challenges, but you can’t affect its influence: Nature is always right. It’s important to avoid trying to impose rigid protocols on what you find in the vineyards. If there’s a storm, for instance, it’s important not to panic; you need to have confidence in your work and, above all, in the soil.

You have to listen to the message from the soil. Working in different places keeps you open-minded. I make wine for Vérité and Anakota in Sonoma County; Château Lassègue and Château Vignot in Saint-Émilion, Bordeaux; and Arcanum and Valadorna in Tuscany. All of them are different, but at each place, the philosophy is the same.

Why were you drawn to Sonoma County?

I first came to California in the 1960s, when I worked an internship near Temecula, a region that’s really too warm for quality grape growing. In California, heat is the main challenge to making elegant, refined wines. So I was immediately drawn to Sonoma because of its proximity to the Pacific’s cooling influence—it’s cooler than Napa Valley.

What was different about Vérité?

When I came back to California in the 1990s, I observed a trend towards producing single-varietal wines: Cabernet Sauvignon in Napa Valley, for example, and Pinot Noir in cooler areas. The varietals were better-​matched to the different regions,
but I still thought there were limitations to working with single varietals. So Jess Jackson and I did something different, exploring the idea of Bordeaux blends to complement Sonoma’s varied soils and topography, trying to maximize the potential of our sites and really express the character of the soils. Twenty years ago, people weren’t talking about Cabernet Franc, Malbec, and Petit Verdot; today, they are.

What aspect of your career gives you the most satisfaction?

My greatest achievement has been to mentor many young vignerons in many regions. And I’m also delighted that my family share my passion. I love working with my wife, Monique; my daughter, Hélène; and my son, Nicolas. They’re all following the terroiriste path, passionate about wines that express the place, not the winemaker’s style. It’s a route that demands intellectual independence, because while you can follow models, you can’t make copies. You have to think for yourself.

What do you like to drink when you’re not drinking your own wines?

I love Pinot Noir. I celebrate with Champagne; I relax with good beer; and I love to conclude a meal with a fine Armagnac. Growing up, my family in Gascony always drank wine together at the dining table with our meals, so to me, wine has always been a part of a civilization involving good food and good company.

The late Henri Jayer used to say that his dream was to make one vintage of Romanée-Conti. If you could make a wine anywhere else in the world, where would it be?

I’m drawn to a lot of places, but I think I would choose New Zealand or South Africa. I’m a big rugby fan; I love the game and the team spirit, and being part of a team is a big part of my professional life: I couldn’t have accomplished anything on my own. I used to play a lot of rugby when I was younger, living in southwest France, and I’d love to recapture that culture in a great rugby nation.

What are your emotions about your 50th vintage?

Well as I said, I’m not especially interested in birthdays or anniversaries. I’m still looking forward. I have no plans to stop; there’s more to do—I want to do more and more and more! But I feel immense gratitude for those that have helped me: for Madame Pisoni-Ferry from Château de Targé in the Loire, where I held my first job as cellar master; for Raoul and Jean Quancard, my mentors in Bordeaux; and above all, of course, for Jess Jackson and Barbara Banke. I owe so much of my success to them.