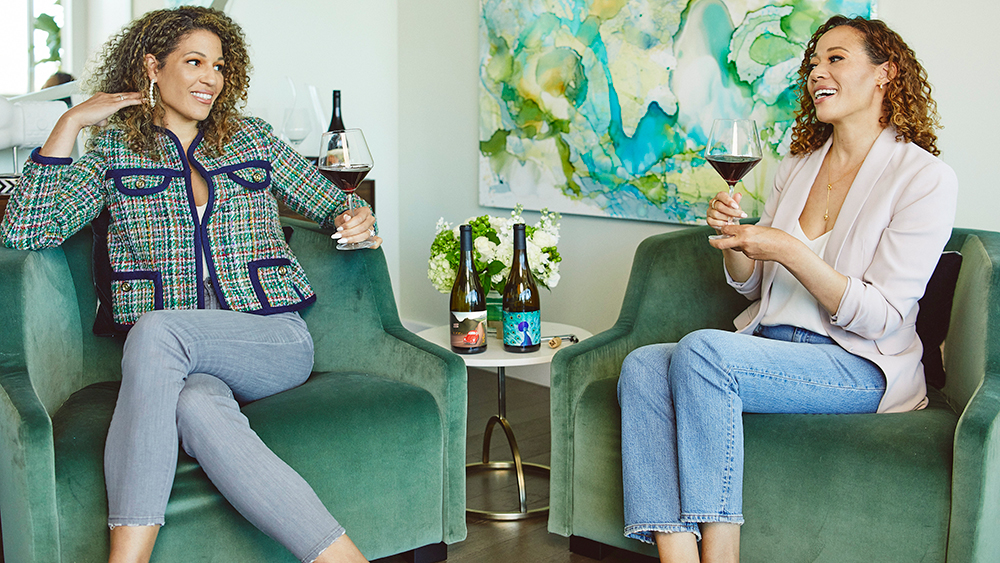 In 1999, in a made-for-the-big-screen scene at La Guardia airport, Robin and Andréa McBride met for the first time, each having only just learned that she had a sister in the world at all, let alone on an entirely different continent in a different hemisphere. And as it turned out, they shared more than an avant-garde father in L.A. They had a dream between them, of making wine.

Robin had launched her journey first, having decamped Los Angeles with her mother, embarking on a post-divorce road trip up Pacific Coast Highway and landing in Monterey. There, she grew up among the vineyards and winemakers of the Santa Lucia Highlands, and was entirely caught up in the vision. Born nine years after Robin, also in L.A, Andréa was unaware of her older sister. Her trip after the family’s second split was to her mother’s native New Zealand, where she grew up in Marlborough wine country and was captured too.

Reunited (in the end, their father wanted them to know each other), it was natural to join forces in the dream of a two-continent winery. “We wanted it to be inclusive, comfortable, unintimidating,” says Robin. And so they collaborated on a delightful rosé, just when thirst for pink was surging. It was a runaway success, and the two have since amassed a McBride Sisters Collection that includes a Sauvignon Blanc and Pinot Gris from Marlborough, as well as a sparkling rosé from Hawkes Bay, New Zealand; and a California Central Coast Chardonnay and red blend. A separate Black Girl Magic line offers up bottles of sparkling, Riesling, rosé, Merlot, Zinfandel, as well as—speaking of unintimidating—sparkling rosé and red in cans. “We first wanted to make wine affordable and accessible,” says Robin. “Now we want to make the kind of wine we fell in love with.”

Enter the McBride Sisters Collection Reserve wines: a Chardonnay and a Pinot Noir from Monterey’s cool Santa Lucia Highlands. These are no pop-up wines in a short-term business plan. “Wine is agriculture,” says Robin. “We started four years ago working with the vineyard owner and the grapes,” a few select rows. And the farming she describes is sustainable, the wines made with minimal intervention, designed to showcase the place.

They affectionally named the wine with the peacock on the label “Cocky Motherf*cker” in honor of their father.  Photo: Courtesy of McBride Sisters Collection

The name they gave their McBride Sisters Collection 2019 Reserve Chardonnay ($40)—“The Great Escape”—throws a smidgeon of shade on big, fat, over-oaked versions of the grape. This one is fresh, lifted and beautifully aromatic, with lemon blossom, juicy green apple and hints of crushed rock on the nose. Bright acidity marks a clean, refreshing palate, with white nectarine peeking out from behind the apple. And a hint of roundness speaks of the effect of a restrained, 16 percent new French oak. As with the substance of the larger brand, the label is drawn from the sisters’ experience—its bright red VW bug the getaway car that ferried Robin and her mother up the state way back when, with the Big Sur bridge in the background.

The packaging for the McBride Sisters Collection 2018 Reserve Pinot Noir ($50), on the other hand, exudes a little more attitude, from the showy peacock on the label to the name, a “fond” reference to their father—ahem, “Cocky Motherf*cker.” The man behind the ode might have been, in their words, “electric, charismatic and confident in his style,” but the interpretation in the wine has a wonderful irony to it. This is a Pinot that’s bold enough to show a delicate, light-bodied side even in its opulence. Crushed raspberry and black cherry aromas are dusted with loam and layered with beautiful florals, sandalwood and spice. A bright, silky palate is balanced between sweet-seeming fruit and earth, delivered with artful plushness.

Robin and Andréa are generous in their success, with a She Can Professional Development Fund donating part of the proceeds from their She Can wines this year to women entrepreneurs. And they’re growing. Expect a Gamay and a Pinot Noir from New Zealand’s Central Otago region to join the Reserve tier soon.