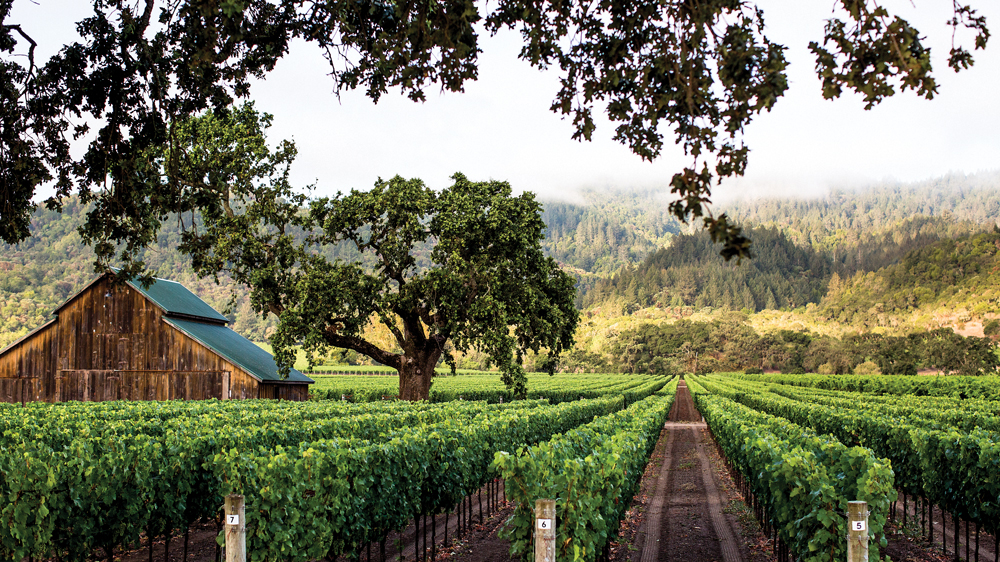 Drill down into a vintner’s experience these days and you’ll find an internship in Bordeaux, a harvest in Australia, a year in Argentina, a progressive stint in California. The movement of winemakers around the globe resembles nothing so much as an in-flight magazine’s map of airline routes.

One path, though, has become more heavily grooved in recent years. More and more winemakers (many representing major houses back home) are traveling on a one-way ticket—from France to the West Coast of the United States. It’s a commitment to concentrate on land lesser known than the great domaines and châteaux of Burgundy or Bordeaux; to raise families an ocean and a continent apart from grandparents; and to risk entire careers on early promise and a hunch.

For Napa Valley’s Philippe Melka, it was the dirt that caught his eye. A native of Bordeaux, Melka has always been a student of the land, earning a degree in geology at the University of Bordeaux. Just in the nick of time, a senior-year class in winemaking propelled him into graduate studies in oenology that landed him in Napa Valley on the verge of a seismic shift.

It was the early 1990s, and the message of the moment in France was that Napa’s wines were good but had no sense of place. But we had never consumed wine by place in this country. We drank Cabernet Sauvignon and Chardonnay, not Pouillac and Chablis. A Napa style of Cabernet (read: hedonistically ripe, not terroir driven) was well on its way to stardom, but for true connoisseurs that was too simplistic. They were ready for more nuance, for an Oakville Cab to taste different from a St. Helena Cab, or a bottle from Howell Mountain to be distinct from a Spring Mountain one.

Melka was given a mission by Napa’s Dominus Estate: Study the soil. Find out why wines from one place have characteristics that wines from 600 feet away don’t. And what he found hooked him on the place—great quality in general (we’re talking dirt here), an exciting range of elevations (which Bordeaux lacks in spades), and a rare diversity of soil types, “which is the most important thing!” he says. “And also the most interesting thing to talk about.” That last bit might differentiate Melka from even the most hard-core wine lovers, but, he says, “A little click went off in my head.”

Those elevations create various exposures and microclimates, which is something connoisseurs, winemakers, and soil geeks all love to chat up. “The volcanic soil type does not exist in Bordeaux,” Melka says, “which is why it was very unique for me to discover. Volcanic rocks play a major role in the resultant character of the wine—either they create a compacted, impenetrable bedrock or, conversely, some fragmented rocks that allow for deeper root systems. This creates completely different types of wines.”

And as Napa Valley began rethinking its winegrowing methods to take advantage of all of its site uniqueness through new attention to everything from rootstocks and clones to row direction and trellising, Melka was positioned to advise. Of course, it didn’t hurt that he already had experience at Château Haut-Brion (not a bad first job out of school), and he continued to stockpile it in France at Château Pétrus and in California with Paul Draper at Ridge. He soon began consulting for some of Napa’s now-legendary producers under his new Atelier Melka umbrella: Lail Vineyards, Skipstone, Davis Estates, Seavey, Château Boswell, Alejandro Bulgheroni Estate (where he shares consulting duties with fellow Frenchman and global wine consultant Michel Rolland).

It’s understandable that a whiff of criticism might float around the newest premier consultant in California’s premier wine valley—a suspicion that a single man will bring a single style and play right into the one-note Cabernet reputation that many in the region are working hard to shed. Melka minces no words on that front: “I’m the reverse of imposing style! I’m here to tell the truth of the soil, and I can’t repeat a style.”

The winemaker who set Melka off on his study of Napa soils and sites in the first place— Christian Moueix, owner of Dominus—was himself a Frenchman whose aha moment came courtesy of an earlier legendary immigrant to Napa Valley: André Tchelistcheff, who in a sense taught a whole generation of California winemakers how to do it ever better. “When I was studying at U.C. Davis in the late ’60s,” says Moueix, “I had the chance to do a harvest at Beaulieu Vineyards with Tchelistcheff. I got a deep sense of a quality that could be worldclass level.”

Moueix would go on to lead winemaking at his family’s properties in France, including Château Pétrus (for 38 years), but also commit to legendary Napa land—Dominus Estate’s Napanook Vineyard in Yountville. The view from both sides of the pond makes him thoughtful. What’s gained and what’s lost here? “It’s a given that each vineyard, in both places, is composed of distinct and varying soils. The most important difference, then, is the climate. Without major precipitation from May 1 to October 15, the growing season is far easier in California . . . but less nuanced—something I miss.” And that’s where his old-world lens focuses (even if more than a few talented California-born winemakers might beg to differ): “For me, the French touch means trying to develop nuances in a wine.”

One state to the north, winemaker Véronique Drouhin, of Burgundy’s famed Maison Joseph Drouhin family, admits to a French outlook, too. “I can only bring me to my wines. I am from Burgundy, and I learned about wine from my father. This is how I think and who I am.” But 30 years ago, it was the potential of the Willamette Valley—which shares a latitude and, in part, a climate with Burgundy—to make exciting Pinot Noir and Chardonnay that drew the family’s attention to launch Domaine Drouhin Oregon.

“My father and I walked onto the land where the domaine is now. We sat down and looked at the grain field in front of us and across the valley, and we said, ‘This place is so beautiful, we have to try.’ It was an emotional connection, then and now.” It gives new meaning to Old World–New World comparisons: This is the Old putting serious skin in the game to further the New. “With Oregon, there’s a sense of discovery linked to both the wine and the place. Yes, there’s always something to learn about Burgundy, but its position in the wine world is known. Oregon is something different and new, and it’s been amazing to see it be accepted, little by little, across the world.”

In the story of France on the West Coast—old-world winemakers (storied and new) putting down roots in the States—is a maverick subtext: We simply don’t have the rules that France has. Rules for precisely what grapes can be planted where, whether they can be irrigated, when they must be harvested, at what alcohol levels, and on and on. On California’s Central Coast (a special haven for mavericks), Guillaume Fabre of 11-year-old Clos Solène puts the subtleties into words: “Here, everybody wants to do a great job and make good wine, so the regulations we have in France, to make sure the wine is good in different AOCs, don’t exist. The New World offers more possibilities.”

Fabre, like his compatriots farther north, was drawn by the land. “When I put my feet down at the San Francisco airport, then drove four hours south to Paso Robles, it reminded me of the region I grew up in, Languedoc-Roussillon.” He came to work for a regulation refugee (from Bordeaux), Stephan Asseo of Paso Robles’s acclaimed L’Aventure, and later launched his own winery concentrating on Rhône varietals. “But,” he says, “our drinkers’ passion, and my passion, pushed me to break through boundaries and make some Pinot, some Chardonnay, even sparkling (just for the club).”

Does he make French-style wine? “I’m sure, yes,” he says. “But I let go of my knowledge of how to make wine in Europe, and make wine differently in California, because of the weather conditions and to respect our style.”

Our style. There you have it. There’s no need to parse the chicken-and-egg questions about whether French winemakers catalyzed innovations on the West Coast or recent decades of winemaking innovations on the West Coast (meteoric, in French terms) drew the old-world talent. It’s our collaborative style now. But the centuries-old French wine lens offers a rosy window on the potential of West Coast vineyards and a ringing endorsement of the product. Go ouest, young winemakers, go west.