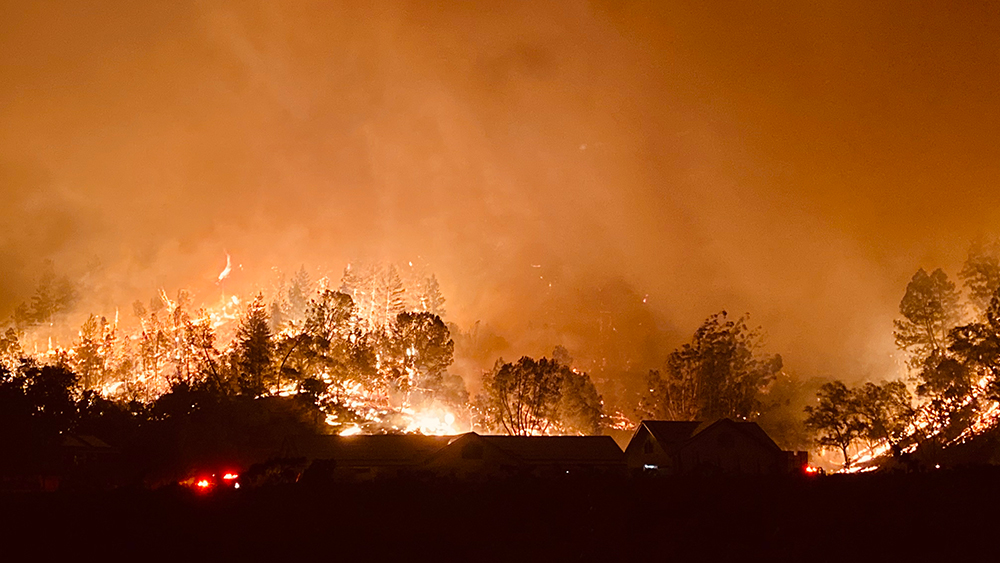 At 5 a.m. last Monday, with harvest in full swing in Napa Valley, Kirk Venge pointed his Land Rover through a maze of vineyard tracks and the dry Simon Creek to get to his winery south of Calistoga. Not his usual route, but the main driveway was on fire. Flames were consuming the hills above as well. “I have old vines and wide spacing,” he says, “so I took the LR4 right on through the vineyard.” But the fire chief waiting on his crush pad told him, “It’s 100 percent sure this will flare up, and you should go.”

Venge, proprietor of Venge Vineyards and a consulting winemaker for some two dozen other producers, “ripped back through the vineyard,” as he describes it, to a safer distance about 400 yards away. And he watched. “The fire freaking exploded behind the winery, and ran to the east and south sides of it. I held my breath.” With embers falling around him, Venge says, he “waited the 5 or 10 minutes it took for the stand of trees behind the winery to create a white-hot curtain 200 feet tall, ready for everything to go. I was saying goodbye to my winery—everything in the world to an owner and vintner.”

But the black color he expected to join the white, indicating that the structure was involved, didn’t materialize. “Holy shit,” he thought, “we’re still standing! If I can open the winery, pull hoses out, and start spraying like hell, we have a chance.” And with the help of a small band of firefighters, they did just that, and won.

Venge’s visceral fight was repeated by too many others through the week, as the Glass Fire, which started on the east side of the valley, threw sparks to the west and ignited two more major blazes, eventually merging into a complex spanning northern Napa Valley and running across the border with Sonoma County toward Santa Rosa. One after another, reports emerged in heartbreaking succession of historic wineries lost or damaged: Château Boswell, Hourglass and Burgess Cellars (recently purchased by the Lawrence Family, owners of Heitz Cellar) on the east side of the valley; Newton (now owned by Moët Hennessy of LVMH) and Cain on the west.

From Newton, president and CEO Jean-Baptiste Rivail reports, “At 3 in the morning on September 28, a blaze of fire destroyed all the structures of the historic estate built by Peter Newton in 1977.” The staff evacuated early, he says, thanks to friends in the valley who saw flames on Spring Mountain and alerted them. “But from what we can assess at this early stage, all the buildings are gone. Most of our production facilities underground seem to have suffered extensively as well. Fortunately, though, the largest part of our previous vintages is stored in a different, secure location, so the wine is safe.”

The Glass Fire, erupting just at harvesttime, was the final blow to a season that saw challenges for the wine industry across Northern California pile on. Drought was always going to be an issue, following a dry winter. But then came the pandemic, with its maze of obstacles—restaurant sales drying up, tasting-room closures, worker safety protocols in vineyards and cellars—then heat spikes, fire and smoke. From August’s devastating LNU Lightning Complex fires that engulfed a shocking percentage of Napa County (about a third, by all reports) and large swaths of Sonoma, smoke hung ominously for many days over vineyards just as they reached the sensitive point of véraison, when the grapes begin to color and ripen and are subject to much higher risk of adverse effects from exposure to smoke.

The struggle was on, to analyze the extent of damage (if any) from vineyard to vineyard, and to agonize over whether to pick and make the wine—a decision very different for estate vineyards than for those that source their grapes under contract. Squarely in the latter camp, Amici Cellars (with sister brand Olema) buys fruit from a lineup of notable growers. Owner John Harris, who evacuated to the Archer Hotel in Napa, describes the smoke-decision dilemma. “When the LNU Lightning Complex Fire hit,” he says, “our grower partners remained in close contact. We all live here, and many of us are family-owned businesses that have been friends for years. We’ve been working together to figure out the best course of action. It’s a case-by-case, day-by-day, minute-by-minute situation. We all sleep with our phones on and take calls at any hour of the day.”

A critical issue is testing for smoke damage. “Testing demand has created a backlog, with local labs taking weeks rather than days to return results,” says Harris. In many cases that’s too late to make an informed decision about the fruit in any given vineyard. “As a result, we’ve sent samples to Australia, Canada, New York, Los Angeles. We immediately share lab results with our grower partners, but it’s also a very inexact science. Results can give you parameters to work around, but there’s also sensory perception.” On that last front, the bottom-of-the-ashtray taint doesn’t show up until after the wine is fermented, so the Amici winemaking team (Tony Biagi and Jesse Fox) is doing micro-fermentations on the fruit coming into the cellar, to smell and taste in real time.

With the spread of the latest fire, Hesperian proprietor and winemaker Philippe Langner navigated smoke issues—and winemaking itself—on the fly, with instinct and a little bit of luck. He’d already made the tough decision not to harvest his cornerstone vineyard because the LNU Fire, with its ominous blanket of smoke, had come within two miles. So when he woke up last Monday and smelled smoke again, he plunged into harvesting his remaining two vineyard sources immediately. But where to make the wine? “I usually send my grapes to a place on Chiles Pope Valley Road,” he says, “but the Glass Fire was creeping up Howell Mountain. If the wind changed direction, it would go straight toward the winery. Plus, I wasn’t even sure the roads would be open.” Langner scrambled to find a safer place to crush his fruit, a winery in Carneros, and by Tuesday, it was done. And as it turns out, Chiles Pope Valley was ordered to evacuate. He still doesn’t know if the fruit he crushed has smoke taint. As he explains, there are machines that can remove it, “but the process isn’t very gentle, so if I have to do it, the wine won’t go into Hesperian; it will go into my Anatomy program, my everyday Cabernet Sauvignon at an affordable price for a Napa Cab.”

Beyond the all-too-real threat of flames, smoke damage is the big question hanging over this vintage, even for those who had brought their fruit in before the latest fire—but more for those who hadn’t. The team at Spottswoode, on the west edge of St. Helena (with winemaker and vineyard manager Aron Weinkauf at the helm), had just picked their last grapes on Saturday, hours before the Glass Fire broke out. But with the wine safely fermenting, president and CEO Beth Novak Milliken (writing with a packed suitcase at the ready, because St. Helena was under an evacuation warning) doesn’t know yet whether they will produce their highly acclaimed estate Cabernet this year. “Our approach is this,” she says, “we’re making the wine as if the growing season has been ‘normal.’ We’re sending samples to both Adelaide and B.C., and results take three to four weeks, so they aren’t useful to us until after the fact. So we ferment the wines as normal, put them to barrel, taste them nonstop and then add the results of the lab analysis to our body of knowledge as we assess them. This is new to all of us.”

That’s one, very reasonable, strategy in the face of disaster. Across the valley, on the east side but south of current fire danger, much-loved Shafer Vineyards has made a different decision. “Smoke taint is a tricky adversary,” proprietor Doug Shafer writes in an email. “You never know when it will emerge. It can show itself during fermentation, months later in the barrel or even years later in the bottle. At no point in our history have we ever sold a bottle of wine we didn’t believe was the best the we can produce. So we have made a heartbreaking decision—we cannot harvest the 2020 vintage because we cannot guarantee to you that the wine will be of the very highest quality.”

Shafer makes clear that this is his vineyard’s decision only, and he respects all of his fellow producers who are figuring out their next steps. And in their messages over the last few days, their commitment to making and releasing only great wine is clear, too.

As of Sunday night, Cal Fire reports the Glass Fire has burned just shy of 65,000 acres, is only 26 percent contained and has destroyed more than 1,200 structures. It may be a while before we understand the full extent of the damage inflicted by one of California’s worst wildfire seasons ever.