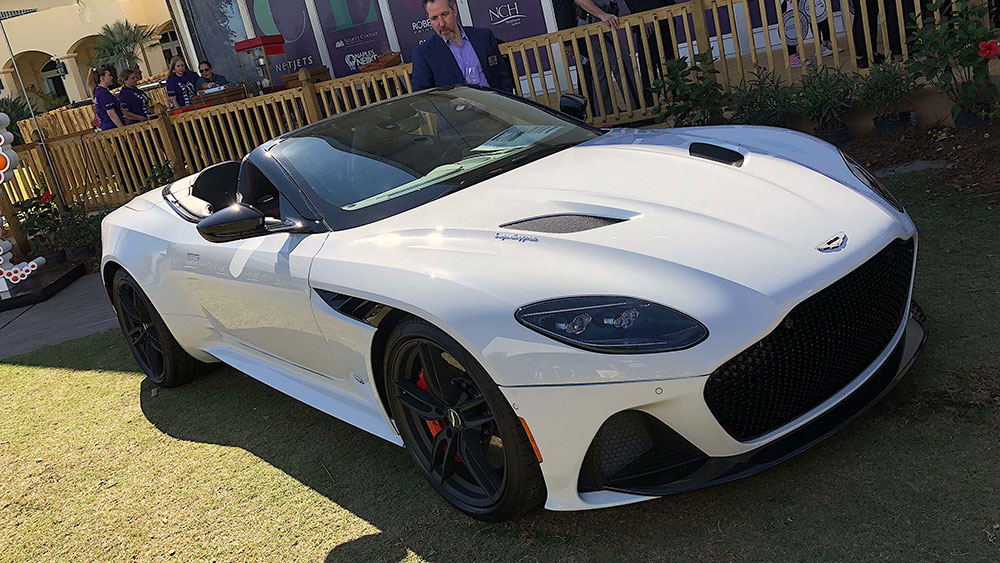 The winning numbers were huge. More than a million dollars for a week’s cruise aboard a 201-foot superyacht; $550,000 for a 2020 Aston Martin DBS supercar plus tickets for the premiere of the upcoming 007 romp No Time To Die; $480,000 for VIP seats at the Wimbledon finals and a 90-minute lesson with tennis great John McEnroe.

When the pledges for all 61 lots were added up, a staggering $20-plus million was raised at last weekend’s annual Naples Winter Wine Festival for underprivileged and at-risk children of Florida’s Collier County.

That brought the total to more than $210 million since the Festival’s inception in 2001, with every cent going to improving the health and education of the Collier County students.

Robb Report joined the more than 700 passionate bidders for this year’s live auction inside the chandeliered tent at the Ritz Carlton Golf Resort in Naples.

We watched as Kool & The Gang warmed-up the crowd, while tables groaning with some of the world’s finest wines put attendees—who’d paid $12,500 a couple to get through the door—in the mood to bid.

And bid they did, tempted by once-in-a-lifetime experiences, like a round of golf with the Golden Bear himself, Jack Nicklaus. To boost the bids for this coveted lot, golfing great Greg Norman, who was in the crowd, even offered to join the group. It went for $360,000.

There was no shortage of bidding either for the chance to drive away in a brand new 2020 mid-engined Chevy Corvette. Though it was probably the part of the lot that included a trip to Vegas to meet Lady Gaga after her show that pushed the winning bid up to $480,000.

So popular was Lot 42—a 14-day, seven-city tour of India with a tiger safari, visit to the Taj Mahal and dinner with the Maharaja of Jodhpur—that two separate bidders offered $300,000 each, adding $600,000 to the overall tally.

It didn’t seem to matter that the winning bidder of Lot 58—for a just-unveiled 2020 Bentley Flying Spur—had purchased a new Bentley Continental GT Convertible six months earlier. She happily bid $500,000 for the privilege of owning the very first Flying Spur to be delivered in North America.

Then there was the five-night vacation for four couples at the brand new Vue de Rêves villa at St. Barths’ tony Cuvée resort. Featuring private jet travel and cooking lessons at Eden Rock’s culinary school, it fetched an impressive $520,000.

The first 2020 Bentley Flying Spur in North America went to a bidder at the festival.  Courtesy of NWWF

But the biggest round of applause was saved for Jim Bailey, owner of the Knights Bridge Winery, in Sonoma, Calif. who sneakily outbid Judy Sheindlin—a.k.a. Judge Judy—with his $1.05 million bid for a cruise aboard the Feadship-built superyacht Majestic.

“I have some very dear friends and this will be the perfect way of spending time with them. And of course, it’s all for a wonderful cause,” said Bailey.

The lot included private jet travel to the Mediterranean for five couples and five days cruising aboard the classic superyacht, pampered by its crew of 16.

And to make sure unsuccessful bidders didn’t go home without emptying their wallets, the auction wrapped up with its traditional Fund-a-Need segment. In a matter of minutes, paddles were waved to make on-the-spot donations totaling more than $5 million, pushing the day’s haul to that record-breaking $20-plus million.

As you might expect, quaffing the finest wines was definitely one of the major focuses of this hugely-prestigious event. Some of the world’s best-known winemakers, vineyard owners and sommeliers flew in to take part.

Paddles were raised high and often at the event.  Courtesy of NWWF

And this year’s Naples Winter Wine Festival didn’t reserve its fundraising activities to the Saturday auction. The previous evening no fewer than 20 lavish Vintner Dinners were hosted by NWWF trustees at their homes.

Robb Report was invited to an intimate dinner for 30 at the spectacular home of local philanthropists Terry and Bob Edwards, with guests that included Shahid Khan, the billionaire owner of the NFL’s Jacksonville Jaguars, and retired General Motors CEO, Jack Smith.

The glass was always half full at this year’s record-setting wine festival.  Courtesy of NWWF

“Over $20 million raised, and over $200 million in 20 years. The entire Naples Children and Education Foundation is in a state of grateful shock at the immense generosity of our festival guests,” said NCEF CEO Maria Jimenez-Lara.