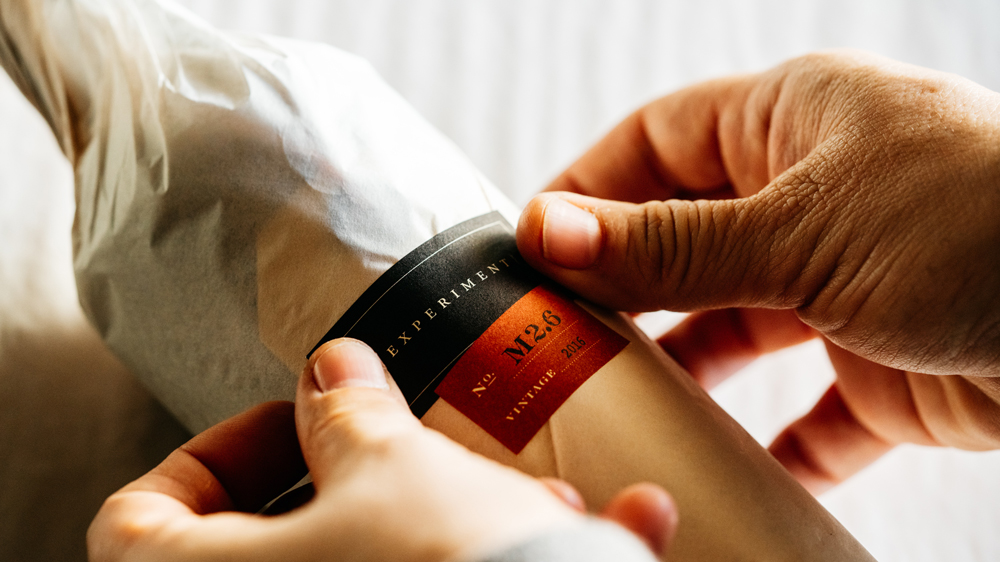 In the Wine Advocate, Lisa Perrotti-Brown, Master of Wine and editor in chief of that publication, comments that Ovid Napa Valley’s 2015 Proprietary Red “comes charging out of the gate with gregarious crushed black cherries, chocolate mint, and crème de cassis scents plus suggestions of red roses, Christmas cake, sandalwood, cloves, and unsmoked cigars with a waft of shaved pencils.” Whether or not you think black cherry aromas in a wine can be gregarious (or crushed, for that matter), you’ll have to admit the line conjures a memorable wine. And, indeed, the signature Cabernet Sauvignon blend from this jewel of a winery and vineyard on rocky Pritchard Hill (recently acquired, in large part, by the Duncan family of Silver Oak and Twomey Cellars)—as well as its Cabernet Franc–dominated sister, “Hexameter”—are complex, earthy, and, well, memorable.

Few know, though, that behind these serious wines are bottles that contain ever-changing grape varieties, simply labeled “Experiment.” Clearly, no one ever told Ovid winemaker Austin Peterson (who works with French consultant Michel Rolland) not to play with his wine. From the producer’s first vintage, 2005, along with the flagship red, Peterson has bottled small quantities of these “Experiments” each year as, he says, “a chance for those on our mailing list to join in our journey of exploration of this estate.”

The “exploration,” as Peterson calls it, is obviously not just for giggles. There was both rhyme and reason to the program. “My father, who was also a winemaker, told me early on that great winemaking is constant experimentation. Every vineyard and cellar have their own needs and protocols to maximize the potential of the wines. But there wasn’t any history at Ovid to draw on, so we needed to try things in a variety of ways, to understand how to make the very best wines possible.”

The experiments (with a small “e”) evolve with the team’s curiosity, and no two wines are alike. “The blends revolve around ideas we’re thinking about as we’re making the wines,” explains Peterson, ranging, he continues in stream-of-consciousness style, “from alternative closures, to the effects of fermentation vessels—concrete or oak—to how barrel size affects the aging of wines, to selections of rootstock and clones in the vineyard.”

Far more than idle curiosities, these wines inform the mother ship in major ways. The first Experiment, for instance, was a blend of Cabernet Franc with Petit Verdot (Cab Franc claims significant territory in Ovid’s vineyards). “We loved that wine so much,” says Peterson, “that it gave us the confidence to use more Cab Franc in the Ovid blend. Then in 2009 we finally decided that we needed to make a Cab Franc–dominant wine on the same level as Ovid, and that was the beginnings of our Hexameter wines.”

While the Experiment wines (three this year—two reds and a white) are available to mailing-list members, they’re always a fleeting, last-chance proposition, since the next vintage will be entirely different. There’s never guesswork, though, on the blend in any given bottle: The varieties are listed on the labels, down to two decimal points. This week, we got the first taste of the 2019 releases.

This one’s all about Cabernet Sauvignon Clone 4, which apparently made its way to Napa by way of Argentina in the 1960s (after initially being mistaken for Merlot there). The wine is densely textured, with grippy tannins and a beautiful core of black fruit—cassis, dusty berry, plum—layered with espresso and crushed rock ($495 for a three-pack).

The label puts it simply: “An exploration of Merlot.” Lush and juicy black cherry flavors and delicate violet aromas give way to black pepper, mocha, soft loam, and velvety tannins ($495 for a three-pack).

That exhaustive list of grapes adds up to a crisp and lovely white. A very slight bitterness—of the lemon zest variety—offers a nice counterpoint to juicy stone fruit, honeyed citrus, pear, white blossoms, faint tropicals, and hints of resiny herbs ($285 for a three-pack).