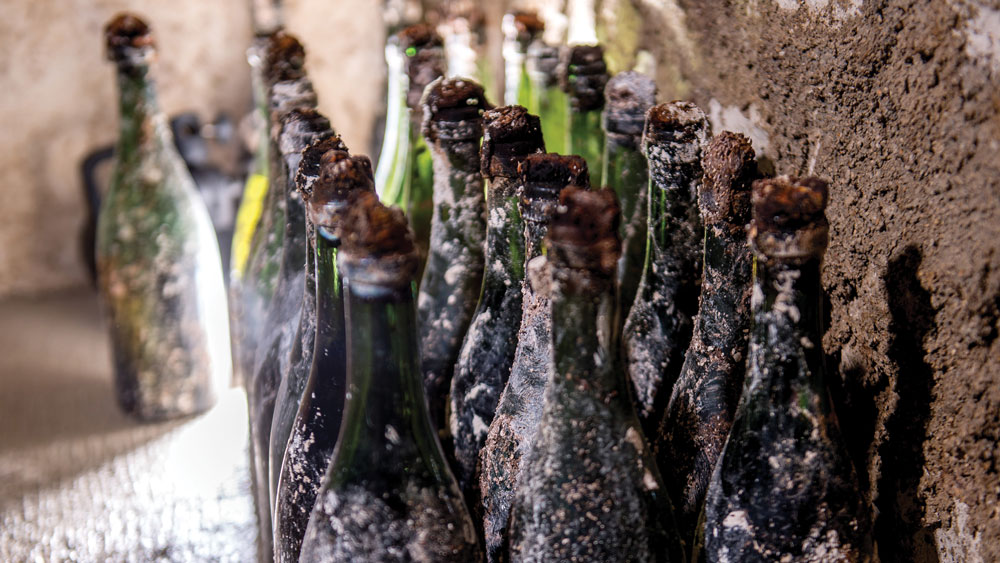 “We are very excited, as the wines appear to be quite clear, despite being buried for more than a century, and we are convinced they may still be drinkable,” says Laurent d’Harcourt, CEO of Champagne Pol Roger, about the recent discovery of a cache of Champagne that survived a catastrophic cellar collapse in the early hours of the morning of February 23, 1900. Apparently the disaster was precipitated by a spell of cold, damp weather, which caused a massive sinkhole to develop in the chalk substrate into which the wine caves had been carved.

In all, 500 casks of wine and 1.5 million bottles of Champagne were lost in the event, nearly wiping out the Pol Roger enterprise. The family concern, explains d’Harcourt, survived largely through the generosity of fellow vintners. Nothing was salvaged from the catastrophe until this past January, when the collapsed cellars were being industrially excavated ahead of the planned construction of a new packing facility. Outgoing chef de cave Dominique Petit and his successor, Damien Cambres, happened to notice a large void at the site filled with broken glass and a single bottle of Champagne. Over the next 2 days, 25 more surviving bottles of bubbly—corked between 1887 and 1898—came to light. For the moment, says d’Harcourt, the search for more has been halted to enable sitework specialists to confirm that the ground is stable enough for further tunneling.

As for the fate of the bottles found thus far? “We plan to enjoy them with friends, family, and fellow oenophiles later this spring. These bottles have been waiting for 118 years, so they can wait a few months more,” d’Harcourt says, noting that before the Champagne can be enjoyed, it must be riddled to remove any sediment. Once it is poured, a select few will have the privilege of discovering just how it compares to Champagnes of similar age, which have been carefully curated in the Pol Roger cellars.

In January, a 17-year-old Pol Roger sells his first wines in Aÿ, France.

Roger moves his business to Épernay, where he begins to produce Pinot Noir and Chardonnay.

Roger begins production of brut Champagne, which is favored by his British clientele.

Roger receives a royal warrant from Queen Victoria of the United Kingdom.

Roger dies of pneumonia, leaving the business to his sons, Maurice and Georges. As a sign of respect, the brothers adopt their father’s full name as their surname.

On February 23, the Pol Roger cellars are destroyed by a massive sinkhole, which also causes nearby buildings to collapse. Some 500 casks of wine and 1.5 million bottles of Champagne are lost. On March 20, tunneling efforts to recover lost stock are halted after a subsequent cave-in on an adjacent property.

Pol Roger is acknowledged as the favored Champagne of Winston Churchill.

On January 15, during a major excavation of the property, outgoing chef de cave Dominique Petit and his successor, Damien Cambres, happen upon an intact bottle of Champagne that survived the collapse of 1900. Soon, 25 more bottles are recovered.