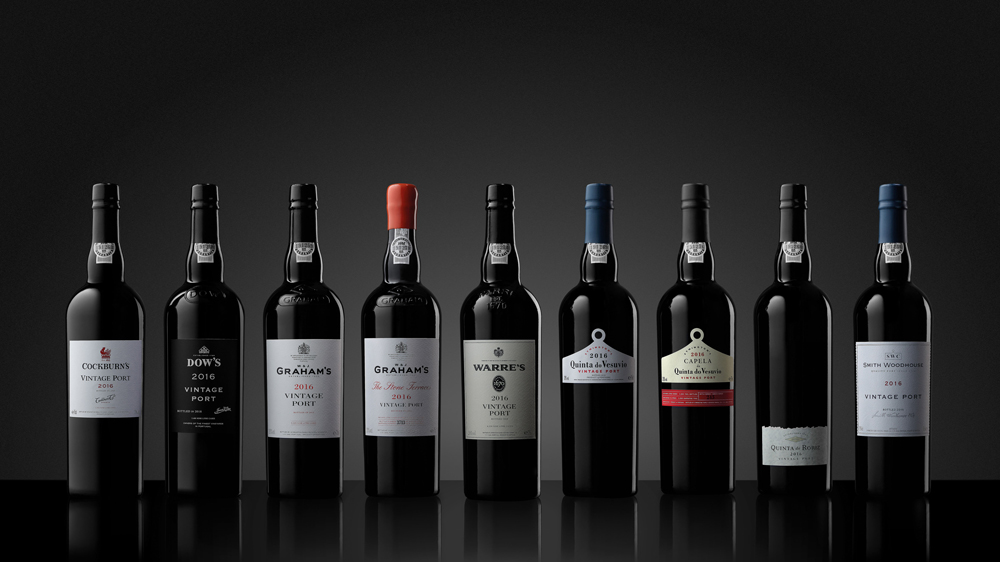 Although it won’t be officially confirmed by the Confraria do Vinho do Porto until September 2018, the 2016 vintage has already been universally declared by the majority of port houses. That encompasses key producers such as the Symington Family Estates (which accounts for a third of all ports sold worldwide, including Dow’s, Graham’s, Cockburn’s and Warre’s), the Fladgate Partnership (producers of Taylor Fladgate, Fonseca, and Croft), and the House of Sandeman.

A universally declared vintage—which accounts for fewer than 2 percent of all ports produced—is dictated by nature and, on average, occurs once every three years. However, it has been five years since the last vintage port—the remarkable 2011—was universally declared, and many are comparing the two for their similar power and finesse.

“The 2016 was a much more difficult vintage than the 2011,” says Rupert Symington, CEO of Symington Family Estates and fourth generation of the founding family, who noted that this latest vintage was marked by a very hot growing season interspersed with an abundance of rain, which caused many growers, fearing crop loss, to pick early. But those who waited—like winemaker Charles Symington—were rewarded by a hot spell that dramatically increased the quality of the grapes.

“That was exactly what the vines needed,” said Rupert Symington, “because the moment you get rain, things shut down and you need a bit of time to get the vines up and running again, restarting the photosynthesis process that transports the sugars from the leaves to the fruit. It was a calculated risk, but it paid off.”

As a result, the 2016 vintages overall possess a depth of flavor and pronounced tannins, and like the 2011s, some are—uncharacteristically, for vintage port—ready to be enjoyed now, while others demand extended aging to bring out their maximum attributes. But beyond that, the two most recent and celebrated vintages of the 21st century are very different.

“The 2011 had some very fine, linear tannins,” says Symington, “but the 2016 is a more brooding wine; the biggest wines are bigger, and the mouthfeel is less overt. The tannins are there, but (with our wines) they are masked by a lot of fruit.”

All the 2016s will benefit from long maturation, some as much as forty years or more. Prices will generally be higher than the 2011 vintage, due to the low yield and extremely high quality of the harvest. That in itself portends rarity. Nonetheless, here are some recommendations when the 2016 vintages start appearing in the U.S. this fall.

“To me, the most appealing to be drunk now is the Croft,” says David Guimaraens, wine director for the Fladgate partnership. “It’s the most exotic, the most exuberant. But our past experiences with the Croft is that it also ages beautifully.”  It sells for $100.

With one of the greatest potentials for long-term aging, this Dow’s 2016 ($150) is an intense wine, thick with black plums laced with lavender and violets. It should be put down for at least twenty years, but already has intense muscular structure.

A perfect vintage to open now. It is typically light in style and full of complex fruit and vanilla with underlying traces of chocolate. It sells for $120.

The Graham’s 2016 ($150) is a classic in every sense, with a smoky eucalyptus bouquet, thick and sweet on the palate, full of black cherries accented with dark chocolate and a hint of mint. Opulent now, it will become even more so in decades to come.

Extremely intense, with smoked candied cherries filling the glass, but it practically demands being aged for up to 50 years – if one can wait that long. In the words of managing director Christian Seely, “It is not only eloquent, but also powerful and profound.” It sells for $125.

“The color is opaque, almost black, very intense and complex on the nose,” says Sandeman winemaker Luis Sottomayor, “with floral notes followed by red fruits, cocoa and a long finish, matched by solid tannins which give this wine a prolonged aging capacity.” It’s available for $90.