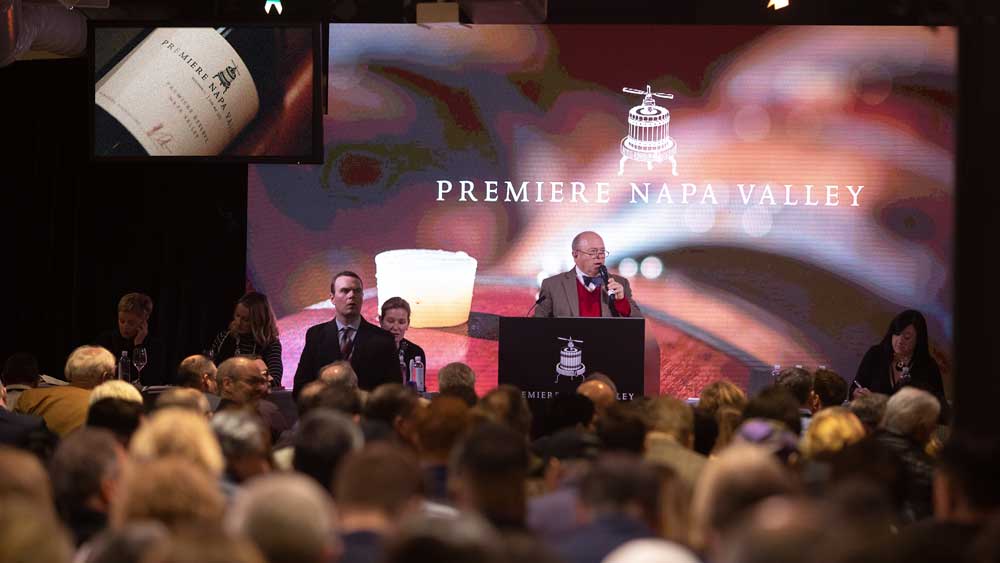 It was a nail-biting moment for Silver Oak’s David Duncan. The vineyard owner was hovering at the back of the room inside Napa’s Culinary Institute of America for an auction; the noisy crowd consisted entirely of his peers, both winemakers and customers. Finally, the time came for the lot he was awaiting: a unique, 240-bottle edition of Silver Oak. This vintage, an estate-grown Cabernet Sauvignon spiked with 10 percent Merlot, arrived with great expectations. At the same auction a year earlier, Silver Oak’s lot had been the highest-grossing of the day, at $110,000.

As soon as the auctioneer began taking bids, the flurry of paddles was reassuring to Duncan; eventually, it turned into a standoff between two determined buyers. Each flash of a number added $5,000 to the final price. It sold for $140,000, or $30,000 more than in 2018. “I never expected to be in the top spot at all, much less have it two years in a row, and do better than last year,” he says of his top-seller. He pauses, smiling proudly. “But it raised the most, by far.”

This auction wasn’t a standalone, though. It capped a weeklong event in Napa known as Premiere, which takes place each February. Since it started in 1997, it has quietly emerged as the Davos of wine drinking. Premiere lures major customers from across the world to California, where they can taste, mingle, and buy one-off wines made specially for the occasion, much like a booze-soaked bake sale. Premiere’s proceeds support the region’s trade body, Napa Valley Vintners (NVV), which both champions and polices its wine (vineyards pay annual levies to belong, but Premiere’s funds are a canny additional source of income). Almost 200 local wineries donated custom lots for 2019’s auction, ranging from 60 to 240 bottles; those one-off wines come from the region’s top-flight producers, including Silver Oak, Shafer, and Schramsberg, which produced a quirky, attention-getting vintage sparkling wine. The total tally this year: $3.7 million in one afternoon.

In theory, Premiere is a trade-only event, open only to those who sell wine: 700 tickets for the auction, costing $350 each, are offered in pairs to significant buyers, like New Jersey–based Gary’s Wine & Marketplace or Total Wine. In practice, of course, collectors are omnipresent, albeit behind the scenes.

Take the Cliffewood Wine Syndicate from Arkansas, a group of more than a dozen wine lovers; they designated a rep to act on their behalf, who snapped up the first lot in the auction, paying $35,000 for 60 bottles from buzzy winemaker Aaron Pott. Many attendees also mentioned the Oklahoma-based group nicknamed the Petroleum Guys, oil-rich collectors with a taste for Napa’s best. Individual buyers can’t attend the auction itself unless they can persuade a major wine broker to part with either of its allocated tickets, a feat one major collector managed for 2019. They can, however, spend the week before in Napa, previewing lots and attending invitation-only dinners; once they’ve reviewed the offerings, they will task a broker with bidding on their behalf against retailers such as Wine.com or the Texas-based supermarket chain H-E-B. “For people who want a shot at something no one else has, a super serious collector? This is the real deal,” explains Karen MacNeil, a wine expert and author of Wine Bible, noting that lots like Silver Oak’s aren’t everyone’s target. “Some are looking for that little black dress [of a wine] that’s a deal nobody else has seen.”

Retailers and wine resellers might invite their top 10 or 15 buyers to join them on this VIP tasting trip, spending a few days touring their favorite wineries and sampling these one-offs before committing a certain budget to spend at the live auction, effectively preselling most of the juice. Much of the wine on offer, of course, is classic Napa, 100 percent or at least a majority Cabernet Sauvignon. Typical is the 240-bottle lot from Louis M. Martini. “It friggin’ rocks: It’s powerful, tight, vibrant, and youthful,” says winemaker Michael Eddy of his offering, excitedly doling out a taste at one preview. “It’s just fun. We get to share unique wines we don’t share with our wine club.” (Eddy’s lot went on to fetch $100 per bottle.) There are a few exceptions to this all-red rule, though, including the Sauvignon Blanc from Coquerel’s Christine Barbe, who specializes in white ($62.50 per bottle), and even a rosé from JaM ($33.33 per bottle).

That’s only the second time a rosé has been on offer at Premiere. The first came from Lang & Reed, whose owner John Skupny has been instrumental in the event since it started. “The idea was to create an artist’s proof of a particular wine, and reconnect with the trade on an intimate basis,” he tells Robb Report, taking a break from the dizzying blizzard of last-minute tastings before the auction. Skupny recalls that the success of today wasn’t guaranteed: One month before that first sale in 1997, just 11 potential bidders had signed up before he and his fellow winemakers scrambled to hustle attendees. Twenty years later, the room easily reaches capacity.

This wasn’t a record-breaking year, though; in fact, the total raised was $400,000 lower than in 2018. But the per-bottle spend was higher, according to NVV, thanks to a smaller number of lots, with the top price a staggering $1,333 per bottle for the Schrader Cellars offering, via notable winemaker Thomas Rivers Brown. The lower total reflects the anxiety around the caliber of 2017’s wines, which formed the bulk of the offering; the vintage was already considered uneven, marred by a hot September, and concerns around its quality were worsened thanks to the devastating late-season wildfires.

By the end of the day, though, the boisterous after-party at Alpha Omega winery dispelled such angst. There, the bulk of the week’s attendees convened to eat barbecue and shimmy to a raucous cover band playing the Doobie Brothers and other rock classics. Standing amid the crowds, its winemaker and partner Jean Hoefliger joked that he usually comes up with his idea for Premiere in the shower. “It’s a great experience–it’s your one opportunity to be creative, and have the trade instantaneously judge the work you’ve done.” In his case, it was two thumbs up: AO’s blend from two vineyards, To Kolon and Crane, had fetched $42,000 for 120 bottles, or around $350 each.