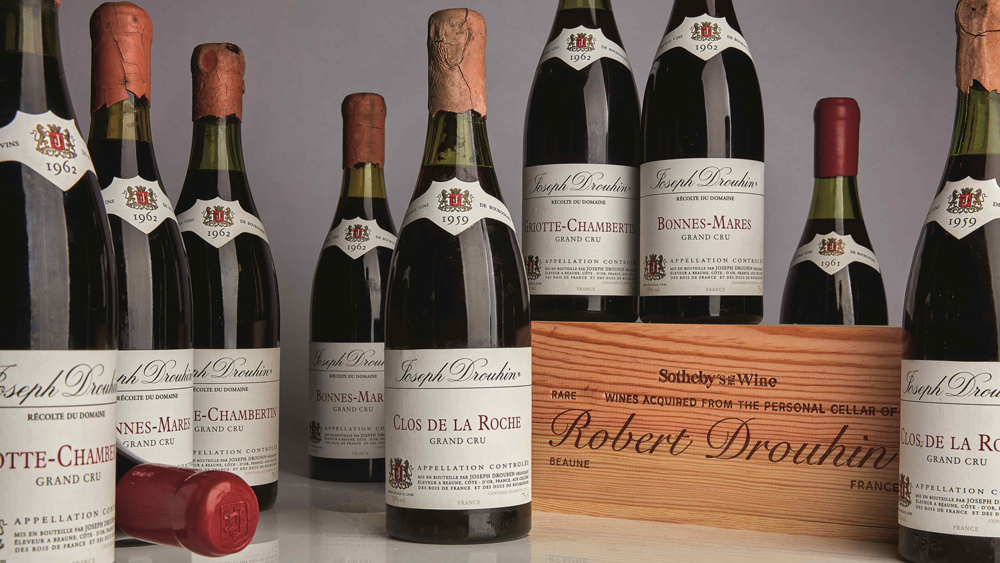 Rarely is a Master of Wine breathless in the face of great wine. But here is Serena Sutcliffe, MW, speaking about 100 lots at auction with Sotheby’s Wine (where she is honorary chairman) on October 13: “The breathtaking line-up of DRC’s stunning vineyard sites brings back memories of vocabulary-defying wines that are imbued with the excitement and complexity of tasting at its pinnacle. One can hardly believe that these wines still exist.”

These Domaine de la Romanée-Conti bottles are a remarkable offering from a single personal cellar—that of Robert Drouhin, patriarch of family-run Maison Joseph Drouhin—spanning 1937 through 1964. Acquired in part with Robert’s father, Maurice, the collection reflects the unprecedented access Maison Joseph Drouhin had as exclusive distributor of DRC wines in France and Belgium from the late 1920s to the early 1960s. Richebourg, La Tâche, even Romanée Conti itself (a magnum of 1937, two bottles of 1961)—they’ll all be on the block. And having lived in the one cellar since leaving the producer, their provenance is close to unprecedented as well.

“The wines being offered have never left Beaune and have been in my private cellar, undisturbed, for more than 50 years,” says Drouhin. “I have been fortunate to enjoy many of these exceptional bottles with friends and family over the years, and now it is time to share them with others.”

Not only do the vintages on offer span four decades, they span World War II, and therein lies a story. Aware that the great wines in his cellar were a target of the Germans, Maurice Drouhin built a wall inside his cellars to conceal them. Robert, just 8 years old, spread cobwebs and dirt to disguise the new chamber. Suspected of engaging in anti-German activity, Maurice was imprisoned for a few months. But when the Germans came for him again, he escaped into the cellars, which ran through a labyrinth of ancient paths and vaults under the city to the Hospices de Beaune, where he served as vice president. He remained hidden under the hospital, cared for by the nuns, until the city was liberated in 1944.

The Germans’ loss is bidders’ gain at Sotheby’s in October. Of the DRCs on offer, Sutcliffe says, “The vintages are among the greatest ever made in Burgundy, both extremely rare and gloriously individual.” And to those Domaine de la Romanée-Conti bottles, Drouhin has added 9 lots of Maison Joseph Drouhin Grands Crus from three legendary years: 1959, 1961, and 1962.

October 13 will indeed be a collector’s playground at Sotheby’s. But Drouhin has some wishes for his bottles’ fate: “I hope that the buyers of these wines will know how scarce they are, how good the wines should be, and drink them with friends and family who can appreciate and enjoy them the right way.”