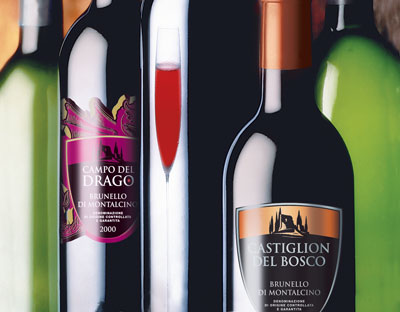 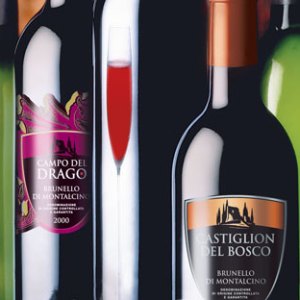 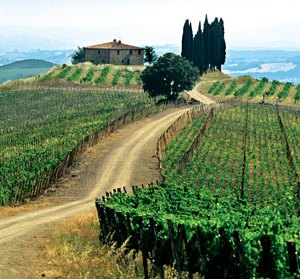 The rumble of construction equipment shatters the serenity of the rolling Tuscan hills at Castiglion del Bosco, a private resort club on nearly 4,400 cypress-dotted acres 60 miles south of Florence. By next fall, the first nine of the property’s 21 villas, as well as its boutique hotel and two restaurants, are scheduled to be complete, ready to deliver the quintessential Tuscan experience to the club’s 120 members.

Already fully operational, however, is the new 39,000-square-foot winery with high-technology fermentation tanks and an arch-ceilinged barriccaia, where the estate’s wine is aged in rows of French oak barriques. At Castiglion del Bosco, it is fitting that wine comes first, for it is at the soul of this historic property, with its 130 acres of Sangiovese grapevines that local farmers have cultivated since the 18th century.

With an annual production of 300,000 bottles, Castiglion del Bosco is the fifth largest among the Montalcino region’s 200 producers of Brunello, a robust and complex red made from Sangiovese grapes. But Massimo Ferragamo, a scion of the Florentine fashion dynasty and partner and developer of this venture, is more concerned with quality than quantity. “We have the goal of being one of the top three Brunello producers,” says Ferragamo, who did not purchase the property until he received assurance that such a lofty aspiration was achievable. After walking the vineyards with leading Italian winemaker Nicolò D’Afflitto to assess the soil conditions and microclimates in various areas of the estate, Ferragamo received the necessary blessing and then retained the services of D’Afflitto and oenologist Cecilia Leoneschi to help achieve his objective.

Because Castiglion del Bosco membership includes shares in the winery (as well as the houses on the estate), Ferragamo knew that the wine associated with the club would have to be exceptional. “I don’t think our members would want to be shareholders in anything less than a great winery,” he says. But patience is required, since Brunello regulations dictate that the wine must age for two years in a wooden cask and two more in the bottle before it is ready to sell in the fifth year. Ferragamo’s first 2003 harvest will not be ready to drink until 2008.

The concept for Castiglion del Bosco evolved from a discussion between Ferragamo and a group of friends. They were chatting about their desires to have a place in Tuscany that they could visit for a month or so each year, but no one wanted the inconveniences of maintaining an individual home there. Ideally, they wanted to find a vineyard that produced a prestigious denomination and had a few homes on the grounds that could be maintained together and shared among the friends.

Ferragamo, who is from Florence but has lived in the United States for the last 25 years, began searching for just such a property, a small one. Ultimately, a friend mentioned that he knew of one that was available, but that it was larger than what Ferragamo had in mind. Ferragamo jokingly replied, “Nothing is too big for us Americans!” The 4,375-acre estate and nature preserve included 21 16th- and 17th-century farmhouses and a small village in which stood the remains of a 13th-century castle fortress and an 800-year-old chapel adorned with original frescoes. Ferragamo did not want to pass on the opportunitto acquire such a remarkable parcel, but he realized he would have to expand the original plan. The estate would have to welcome more than just him and his small group of friends. “When you find land like this, it dictates to you,” he says, noting that the estate’s borders have remained virtually the same for several hundred years. “You have to adapt your thinking to do what’s right for the property, rather than try to force it to fit your concept.”

At a subsequent dinner in New York, Ferragamo enlisted as a partner longtime family friend Corky Severson, a golfer, who initiated a grander vision that would lead to Italy’s first Tom Weiskopf–designed golf courses—an 18-hole championship course and a nine-hole short course—to be managed by Troon Golf of Scottsdale, Ariz.

The club’s future boutique hotel in the Borgo.

The plan for the estate was further expanded to include the development of the village area, called the Borgo, where the Ferragamo hospitality division, Lungarno Hotels, will manage a 23-suite boutique hotel—with a romantic restaurant, a bar, and a library—intended primarily for members’ guests. Anne Bramham, a consultant who trains massage therapists and aestheticians for Spa Montage in Laguna Beach, Calif., is developing the full-service spa that will specialize in natural herbal therapies. And Faith Willinger, a leading culinary authority, will direct the estate’s culinary arts academy.

Castiglion del Bosco memberships are by invitation only and must be approved by the board. Ferragamo would not disclose for publication the cost of a membership, except to say that it will be somewhere in the seven figures to join, with unspecified annual dues. Members obtain equity in the winery and all of the houses, and the shares can be passed along in their estates or sold with approval of the membership committee. As long as one year in advance, members will be able to reserve as many as eight weeks (four weeks in high season and four weeks in low season) in any of the villas, with a two-week maximum stay; there is no limit to the length of a stay, as long as homes are available. The villas, which range in size from 3,000 to 6,000 square feet, offer a variety of floor plans, and each has its own pool. Some houses are located close to the Borgo and its amenities, while others are remotely sited for privacy. One such residence, the Villa Capanna, is located on the western edge of the property, surrounded by Sangiovese vines that produce the estate’s premium Brunello.

Castiglion del Bosco is in the process of replacing some of the old Brunello vines with new ones that will not yield a quality wine for years to come, but Ferragamo is confident that it will be worth the wait. “The place is magic,” he says. “It’s one of the most beautiful vineyards in the world.”