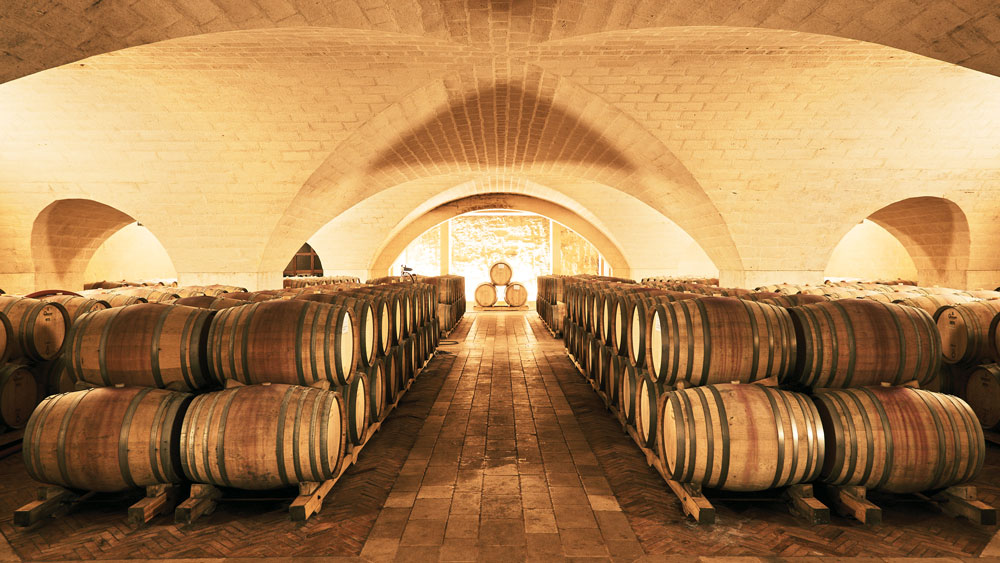 The undulating landscape of Italy’s southeastern terrain—the proverbial heel of the boot—has long been overlooked by the armies of tourists that make their seasonal invasions of Campania, Tuscany, Piedmont, and the Veneto. Yet this neglect may have been a boon for the people of this predominantly agricultural region who for millennia received an abundance of attention from the occupying forces of Greece, Spain, and the Ottoman Empire. So frequent were these intrusions that one of the two signature architectural styles of Puglia is the masseria, or fortified farmhouse, behind whose barred gates the owners retreated in times of peril. The other uniquely Apulian structure is the trullo, a conical stone laborer’s hut that came into vogue in the 19th century as viticulture began to play a larger role in the area’s economy. Today, the gradually changing circumstances of this once-poor part of Italy are reflected in the transformation of many masserie into boutique hotels and trulli into rentals for well-heeled oenotourists.

The cultivation of wine has served as an important catalyst for this gentrification of Puglia, which is sometimes referred to as the New Tuscany. The sobriquet is apt, given that the oenological renaissance began with an investment by Piero Antinori, the patriarch of Tuscany’s distinguished and aristocratic wine-producing family. When Antinori acquired the flagship estate of the unquestioned jewel in Puglia’s viticultural crown of Tormaresca in 1998, Bocca di Lupo, under the joint ownership of the Palumbo and Gancia families, had been producing mainly bulk wine. The Florentine vintner, however, recognized in the property an unpolished gem.

“The Antinoris were the ones to really start the Tormaresca project,” observes the label’s brand manager, Vito Palumbo, whose father was once part owner of the land. “They were looking ahead, thinking the region could produce world-class wine. The family fell in love with the landscape and the beauty of the land, which was undiscovered at the time. They also fell in love with Aglianico, which is the grape of Bocca di Lupo. So they invested more than €30 million, replanting the vineyards and building the facility.”

A magnificent orchestration of angles, arches, and creamy white stone, the winery at Bocca di Lupo—set nearly 1,000 feet above sea level and located in the Castel del Monte DOC—embodies the synergy between tradition and progress that characterizes present-day Puglia. With its bell tower and walls of tufa bricks, the structure reflects not only the bright southern sunlight but also the air of well-fortified sanctuary found in the neighboring historic masserie. Inside, however, state-of-the-art technology and a pristine 1,000-barrel cellar, complete with vaulted ceilings, aid in crafting some of the most extraordinary examples of this ancient red varietal—which, at its best, matches or even surpasses the power and grace of Nebbiolo or Sangiovese.

“We have two estates,” says Palumbo, “Bocca di Lupo in the north and Masseria Maìme to the south, in Salento. The soils at Bocca di Lupo come from oceanic rocks, so they lend the wines a slight brininess that you can detect when tasting. It’s right between the sea and a volcanic area. The days are hot and dry, the nights cool, so it is the perfect terroir for Aglianico.”

Technically, the designation “Noble Grape”—which refers to international varietals recognized for their consistent quality—applies only to such ubiquitously planted vines as Cabernet Sauvignon, Pinot Noir, and Syrah. However, many argue that Aglianico—like Sangiovese and Nebbiolo—deserves inclusion in this august grouping. Thought for many centuries to have been brought to southern Italy by early Greek settlers in the 6th century BC, this intense, tannic, and astonishingly expressive grape probably takes its name from the Italian word Ellenico. Allegedly the basis for one of ancient Rome’s most famous wines, Falernian—of which the writer Petronius was especially fond and which fueled the orgies depicted in his Satyricon—Aglianico is not, in fact, of Hellenic origin, according to recent genetic studies. Thus, it remains something of an oenological mystery. No question exists, however, as to its tantalizing charm, prodigious structure, and impressive longevity. “It’s a very challenging grape because it has very nervous tannins,” Palumbo says. “The main challenge at Bocca di Lupo is to put the velvet glove over that iron fist. It’s quite different from the typical wines of Puglia. At Masseria Maìme, the main wine is Torcicoda, which is a Primitivo. The Aglianicos from Campania and Basilicata come from volcanic soils, so the tannins are more angular and the wine leaner. In Puglia, where it’s warmer, the nose becomes a bit more fragrant, dense, and because of the soil and proximity to the seaside, the palate is smooth.”

This mix of intensity and polish informs the refined 2012 vintage of Tormaresca Bocca di Lupo. Reminiscent of young Barolo, this garnet-hued red offers a rich nose of wild berry, dried herb, coffee, and anise. On the palate, flavors of black plum, ripe cherry, pomegranate, and menthol coat a core of fine-grained tannins. The more mature 2001 vintage, on the other hand, more closely resembles a Brunello di Montalcino thanks to its black-red color and scents of blackberry, fennel seed, dried orange peel, cinnamon, and tea.

The differences between these two bottles underscore the complexity and range of Aglianico from Puglia—not to mention the sagacity of Piero Antinori in realizing, decades ago, that Bocca di Lupo presented his family not only with the means to produce uniquely delicious wines but also with the opportunity to help reinvent the region. “The Marchese [Antinori] says the Pugliese have always been great farmers,” notes Palumbo. “They are the largest producers of olive oil, table grapes, and vegetables. But nobody really had the vision to invest in technology and innovation in winemaking. Tormaresca has raised the bar of quality for the region, and now that change is leading to success in tourism, which has happened in the last 5 or 10 years. That,” he adds, “is maybe the largest revolution that the Antinoris bring to Puglia.”

Visitors to the Bocca di Lupo estate should pair a bottle of Tormaresca’s superb Aglianico with a meal prepared by chef Pietro Zito. At his small, casual restaurant, Zito specializes in the country cuisine of his upbringing. There, the atmosphere is very much that of a modest home in which the proprietor mingles intimately with his guests, who are free to venture into the kitchen for conversation. Zito’s menus emphasize seasonal ingredients harvested within a few square miles of the town. Diners may enjoy such rustic delicacies as bread or pasta made from grano arso (“burned grain”) or pancetta di cavallo.

The Florence of the South

The main metropolis of the Salentine Peninsula, Lecce presents the visitor with an eye-popping assortment of visual and cultural wonders. Although the city existed at the time of the Trojan War, it was moved to its present location by Emperor Hadrian in the second century. Evidence of antiquity persists in the form of the Roman amphitheater (still used for performances), but the historic center’s architecture is dominated by the elaborate baroque style. From the gracefully appointed Risorgimento Resort, located in an impressive 19th-century structure, travelers can stroll among the city’s sights, which include the Basilica of Santa Croce, the Triumphal Arch, and the Column of Sant’Oronzo.