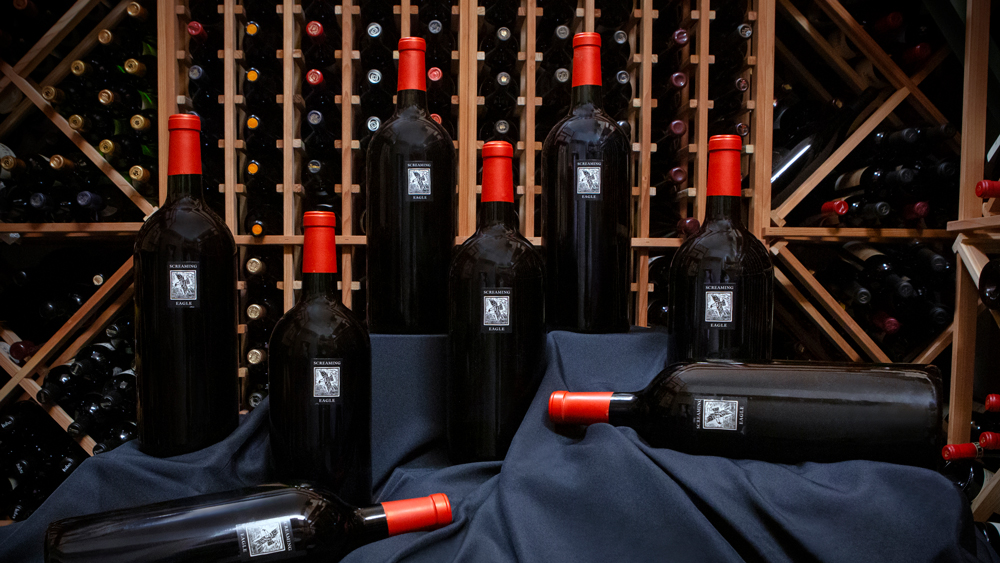 When founder Jean Phillips and winemaker Heidi Barrett released their first vintage of Screaming Eagle—the 1992—Robert Parker, the world’s most powerful wine critic of the day, called it “one of the greatest young Cabernets I have ever tasted.” And with that, a cult was born. Parker’s The Wine Advocate would go on to award five of the wine’s 23 vintages a perfect 100-point score. As the publication’s current editor in chief, Lisa Perrotti-Brown, MW, puts it, “Screaming Eagle is now one of the most sought-after wines on the planet.”

Beyond the high praise, Screaming Eagle has garnered record-setting prices on the secondary market, which can also be chalked up to the fact that those first vintages were made in minuscule amounts: 175 cases of that ’92, according to Perrotti-Brown, 130 in ’93, 175 again in ’94. And at no time have any large-format bottles ever been offered for sale by the winery.

This makes Lot #7 one of the rarest collections of California wine ever to be put up for auction. Hitting the auction block at the Naples Winter Wine Festival on January 26, it’s an eight-year vertical of three-liter bottles of Screaming Eagle, from the original 1992 through 1999, and the only known set in existence. Live bidding will take place at the Ritz-Carlton Golf Resort, Naples, but prequalified bidders can join by phone in real time, which is likely to make for historically stiff competition.

It would be hard to overstate the appeal—from pedigree to provenance—of this rare lot. All eight vintages were made by the founder-winemaker team of Phillips and Barrett. The collection was originally purchased in 2001 by Ron Kuhn, honorary trustee of the Naples Children & Education Foundation (NCEF, the founding organization of the Naples Winter Wine Festival), at Auction Napa Valley. Just for the record, the bottles were delivered to Naples by private air, and they’ve since been stored in Kuhn’s temperature- and humidity-controlled cellar.

The donation is remarkable, to be sure. But it’s matched by the cause—the work of NCEF to improve educational, emotional, and health outcomes of underprivileged and at-risk children in Collier County, Florida. Since its inaugural auction in 2001, the Naples Winter Wine Festival has raised more than $176 million, helping hundreds of thousands of children through some 45 local nonprofits. When the gavel comes down on this vertical of what Perrotti-Brown calls “one of the rarest, most highly prized (and subsequently expensive) wines in the world today,” expect the total raised to be considerably higher.