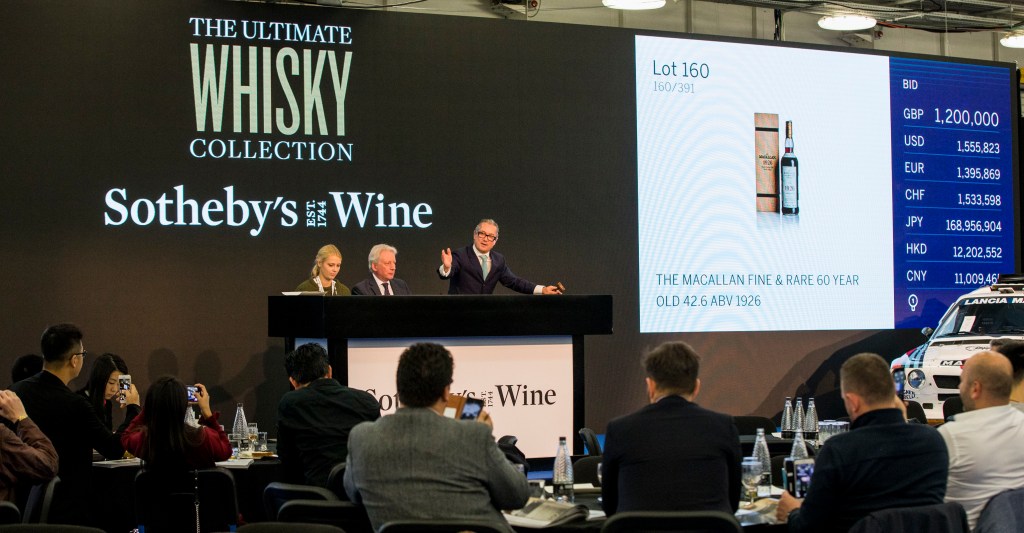 This week, iconic auction house Sotheby’s Wine released its market report for 2019, and the numbers are eye-popping, somewhat surprising, and, for investors, instructive. Records were broken, with Sotheby’s auction sales hitting $118 million, a 20 percent increase over 2018, and a new high achieved for a private wine collection sold at auction—$30 million.

Sotheby’s 2019 breakout beverage, though, was clearly spirits. Its first dedicated spirits sale—The Ultimate Whisky Collection—brought in $10 million, a world record for most-valuable private whisky collection at auction. And a single bottle, the Macallan Fine & Rare 60-Year-Old 1926 became the world’s most expensive—wine or spirit—going for a cool $1.9 million. The average bottle price across the Macallan was $24,744 compared to $5,855 for Sotheby’s top wine producer.

That last would be Domaine de la Romanée-Conti, and spirits comparisons aside, the Burgundy icon continued to dominate the fine-wine market, with sales topping $27 million (more than the top 10 Bordeaux producers combined). That share represented 25 percent of all Sotheby’s wine sales and 44 percent of its Burgundy sales. Joining Domaine de la Romanée-Conti and Sotheby’s other top 10 producers for the first time was Dom Pérignon (at number 8), leading an increase in Champagne sales, and a substantial increase in average bottle price—up 110 percent.

Chairman of Sotheby’s Wine, Jamie Ritchie, sees a connection in these success stories. While a substantial bottle-price increase put a greater supply of Domaine de la Romanée-Conti into the market, he explains why the Burgundy brand is consistently Sotheby’s top producer, and what Dom Pérignon and even the Macallan share. “They all produce a high-enough volume at extremely high-quality levels to be factors in rising demand,” says Ritchie.

Interestingly enough, this has all nipped market share from Bordeaux, whose average bottle price took a bit of a beating last year. Ritchie predicts a comeback. “My view is that Bordeaux is currently undervalued,” he says. And therein, of course, lies opportunity.

The details of the auction house report are fascinating—producer rankings (Screaming Eagle over Harlan Estate 33 percent to 24), wine sales growth or decline (the fact that Bordeaux was down to 26 percent from 46 percent in 2018 supports comeback potential), and more. You can see the full report here.

Sotheby’s is dropping the 2019 details, of course, in the middle of interesting (to put it kindly) times in 2020. Ritchie acknowledges as much. Off the top, we have 25 percent tariffs in place in the US on select wines from France, Spain, Germany and the UK. So far, prices in the primary market haven’t moved much, but that will change; by September, he projects, there will be upward movement, and prices in the secondary market will be affected. “There’s a lot going on in the near future,” he says. “We have Brexit in London. The virus is an unknown factor …” The most important factor, in his view, is the economy (which, for the record, is shaped by all of the above).

Ritchie sees the auction market as efficient, though. “And at the end of the day,” he says, “wine is an enjoyable thing shared with friends. We need that now more than ever. I think the relatively strong market will continue, with pockets of opportunity.” (See Bordeaux, above.)