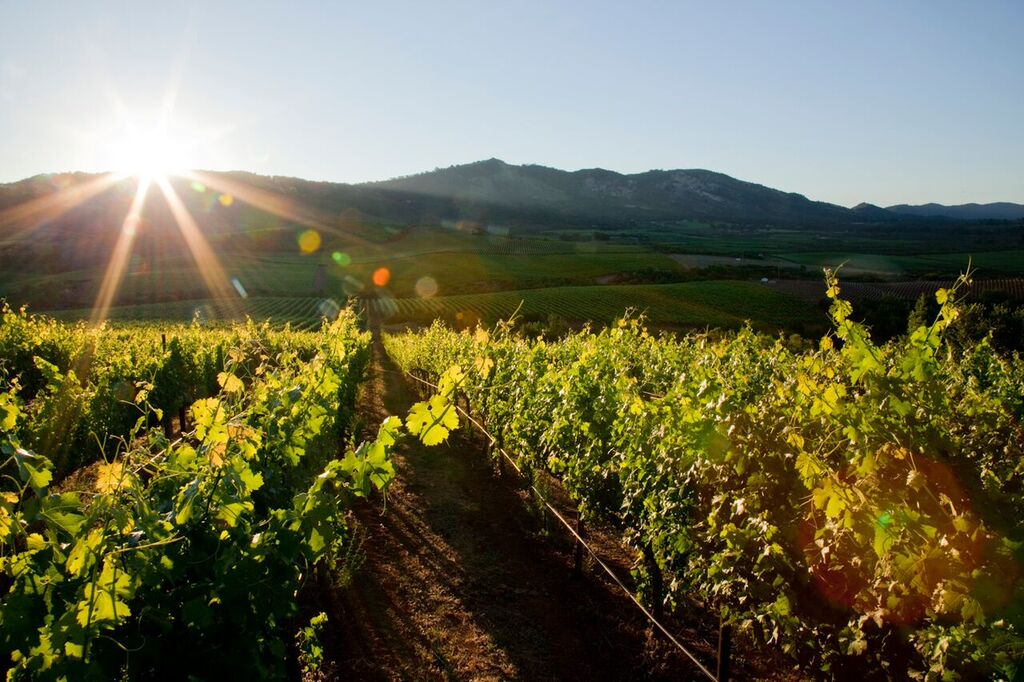 There’s delicious irony in the fact that some of Napa Valley’s most exciting wines come from high in the mountains flanking the valley proper—the Mayacamas on the west side (Mount Veeder, Spring Mountain), the Vacas on the east (Howell Mountain). Yet as these AVAs have drawn knowing fans and praise for the muscled structure of their wines, one mountain appellation has remained somewhat quieter and a little less visible: Atlas Peak. That may well be because it is less visible, requiring perseverance along circuitous routes to reach. And possibly, too, because its most famous vineyard—Stagecoach—straddles the AVA line, occupying Pritchard Hill, as well.

Sometimes it takes a new eye—an outsider’s quest for a place with grand cru potential—to shine a new light on a region that’s been hiding in plain sight with remarkable wine-growing characteristics all along. Follow behind on that quest, and some awfully good wine is the proverbial pot of gold.

The newest spotlight on Atlas Peak comes from Acumen Napa Valley, launched in 2012 by Eric Yuan and an impressive team, headed by now-late (and sorely missed) Denis Malbec; acclaimed winemaker Henrik Poulsen, who worked with Malbec and carries on the vision; and well-known viticulturist Garrett Buckland (currently president of the Napa Valley Grapegrowers). In describing the region’s potential for Bordeaux varieties, Poulsen has high praise: “With its high elevation, relatively cool climate, and volcanic soils, it is a place where the grapes can ripen perfectly while retaining complex structure and tannins. We believe that Atlas Peak is Napa Valley’s next frontier for mountain-grown wines.”

Fun fact: In California, only three percent of wine grapes are grown at altitudes above 1,000 feet. Acumen’s two estate vineyards (Attelas and Edcora) range from 1,300 to 1,600 feet, where temperatures during the growing season hover about 10 degrees below those on the valley floor. Add in hefty diurnal swings—as much as 50 degrees—and the fruit retains great natural acidity and earthy minerality (the rocky volcanic soils have something to say about that). The style of Cabernet the team is shooting for might be a throwback to the ’60s or ’70s, with freshness, precision, and structure that promise longevity.

Of course, one wine grower would be forgiven if he took exception to that “next frontier” bit. This was his frontier more than 20 years ago now, and the awards the wines off his vineyard have earned have been legion. That would be Dr. Jan Krupp, who saw the potential of these remote, south-facing slopes and in 1995 began developing the legendary Stagecoach Vineyard (now owned by E. & J. Gallo Winery), the fruit from which has been a hot commodity among Northern California’s best winemakers. His explanation for committing to this land is supremely simple: “Slopes are always a plus, and a southern aspect is an advantage on a mountain that has cool years. Thin, rocky soils are predominant here, providing frequent stress, leading to high-quality wines. Water was also plentiful [although Krupp defied the geologists to find it]. Water keeps the vines from crashing during heat spells, especially in soils with limited water-holding capacity.”

One more influential commitment to Atlas Peak comes from someone who knows more than a little about the long-term agricultural proposition and craft that is wine: Italy’s Marchese Piero Antinori (along with his three daughters). With 26 generations of winemakers in the family—spanning some 630 years—the Marchese has gone exploring in more than one direction outside his historic winemaking home in Tuscany. And in Napa Valley, Atlas Peak was where he put his stake in the ground, with Antica (a mash-up of Antinori and California). The family’s evolution in their vineyards here has been material to the evolution of Atlas Peak itself.

And the Antica Napa Valley 2015 Cabernet Sauvignon Atlas Peak ($60) is intensely aromatic, with smoke and graphite on the nose, followed with blackberry, spice, and impressive tannin structure.

Finally, I’d be remiss not to note that during Northern California’s devastating wildfires in the fall of 2017, Atlas Peak was one of the most threatened of Napa Valley’s AVAs, with stories emerging of structures burned and dramatic evacuations. Remarkably, these vintners report very little residual damage. According to Dr. Krupp, Stagecoach Vineyard did well: “Only one percent of the vineyard acreage was damaged.” It turns out that moisture-rich vines make effective firebreaks. And everybody on the Peak has moved on—diving into the business of harvest 2018.