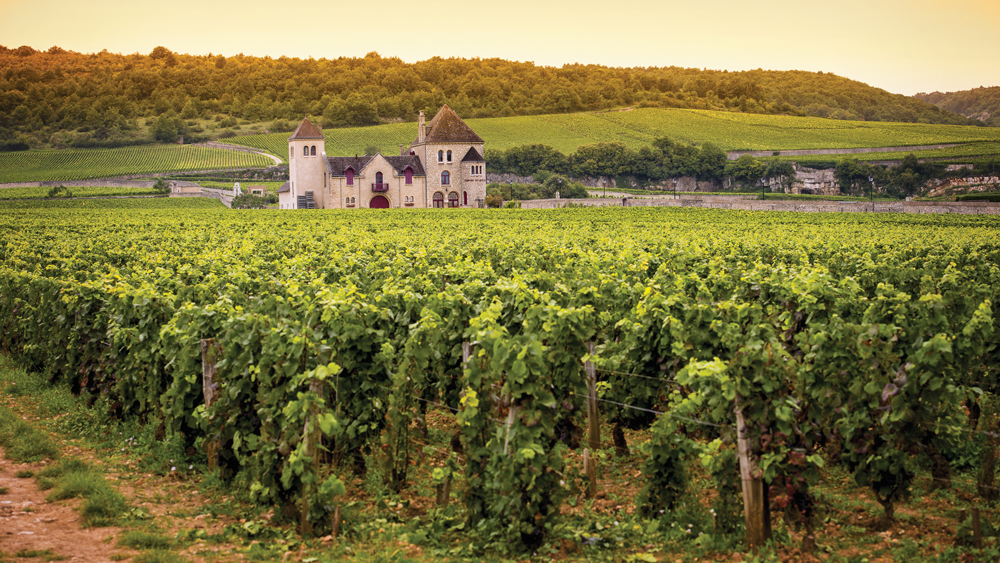 At first glance, fine wine presents almost unlimited opportunities for passionate investors. While drinkers might balk at the $3,000 average price tag attached to a bottle of Pétrus, one of Bordeaux’s greatest reds, that sum is trivial beside the cost of a new Bugatti sports car, Patek Philippe watch, or Joan Miró painting. Compared to other collectibles, fine wine represents a relatively modest investment—one whose returns can be considerable.

“In the last few years, it has been the top wines from the best producers in great, mature vintages that have appreciated the most,” observes Jamie Ritchie, head of Sotheby’s global wine business. As prices for young wines soared at the beginning of the millennium, mature bottles increasingly looked like a compelling proposition—especially to a new generation of buyers eager to possess and experience fine wine’s reference points.

Red Burgundy has led the field by a significant margin, says Ritchie, as bottles of the region’s most coveted estates have multiplied in value. This appreciation has occurred with young wines as well as old. “The top 10 Burgundy reds have appreciated in value 16.8 percent in the past year, which is a frankly ridiculous rate of return,” reports Don Kavanagh, editor for Wine-Searcher, the wine world’s leading price database and search engine.

The wines of Domaine de la Romanée-Conti (DRC), one of the region’s most prestigious addresses, have witnessed particular growth. “Even when clients without much knowledge of Burgundy have invested in DRC, it’s amazing to see how well some of their purchases have performed,” notes Julien Froger, director of Hong Kong–based L’Imperatrice, a specialist Burgundy importer. “For example, La Tâche 2004 and 2007 [the least attractive vintages of the decade, thus the cheapest] have more than doubled in price over the past 4 years. Even DRC’s Échézeaux [typically among the least ardently pursued grand crus in the domaine’s portfolio] saw prices increase by nearly 50 percent in the past year.”

What applies to DRC applies equally to other benchmark producers. The wines of Domaine Leroy, Domaine Armand Rousseau, and Domaine Roumier have experienced similar gains. In Hong Kong, Froger points out, bottles of Musigny from Leroy and Roumier now trade for the same sums as DRC’s best, having respectively tripled and doubled in price in just a few years. And even these famous names increasingly find company.

Another region that has witnessed rapid growth is Piedmont in northern Italy. According to Wine Lister, the region’s five top brands—which include producers Bartolo Mascarello and Giacomo Conterno—have been appreciating by 26 percent over the last 2 years. Piedmont, adds CEO and founder Ella Lister, “still represents great value for money compared to other fine-wine regions, and so there’s no reason its ascendancy won’t continue.”

Where does Bordeaux—long the dominant region in the fine-wine trade in terms of both value and volume—fit into this equation? The big story of the decade has been the diversification of the market, says Anthony Maxwell, director of Liv-ex, a London-based exchange for investment-grade wine. “Bordeaux was 90 percent plus of the market a few years ago and is now circa 70 percent. The wines of Burgundy, Italy, and the New World have entered the arena and are flying.”

But if Bordeaux’s appreciation has been sluggish, the region does seem to be rebounding from the price crash that began in 2011. Some producers have performed especially strongly. Wine Lister points to such examples as Le Pin and Châteaux Figeac, Pétrus, Angélus, and Calon-Ségur, while Ritchie singles out Châteaux Pontet-Canet and Montrose as high performers. Stephen Browett of Farr Vintners, the world’s leading Bordeaux merchant, observes that the 2005 vintage in particular has begun to appreciate as the wines soften and collectors begin to recognize their quality.

Oenophiles in search of opportunities are finding their quest a complicated one. Burgundy seems set to continue soaring, but these wines are exceptionally difficult to find thanks to the region’s minuscule volume of production. DRC’s Romanée-Conti vineyard, for example, yields around 5,000 bottles in a good year; by comparison, Bordeaux’s Château Lafite Rothschild produces 240,000 bottles in an excellent vintage. Production of many coveted Burgundies is significantly smaller: Domaine Dugat-Py produces only around 200 bottles of its sought-after Chambertin in each vintage.

“Burgundy will always be the ultimate collectible, but it’s a tapped market,” says sommelier-turned-winemaker Rajat Parr. “Retailers will only sell the top wines to good customers who support their portfolios across the board.” A new client demanding bottles of Roumier’s Musigny or Rousseau’s Chambertin-Clos de Bèze, in other words, is likely to be disappointed.

Further complicating matters, release prices are higher than they once were for ex-domaine and ex-château. Not long ago, a keenly priced allocation of blue-chip Burgundies bought directly from the source amounted to a license to print money. But today, according to Greg Castells, president of Martine’s Wines, “Producers have caught up on pricing.”

Castells, who imports the coveted Burgundies of the region’s grande dame, Lalou Bize-Leroy, observes that formerly undervalued wines have been radically repositioned in the last decade in response to their burgeoning market value. “The days of making 600 percent return on a bottle are long gone,” he concludes.

Of course, Burgundy does still offer opportunities for investment. The same scarcity that makes the wines so hard to locate also guarantees their appreciation. But building a meaningful collection today likely requires expert advice and good relationships with merchants and importers. Collectors must also pay careful attention to authenticity, as Burgundy’s rarest bottlings are catnip for counterfeiters.

Buyers looking to invest should explore less obvious regions. In Italy, the best Barolo and Barbaresco producers operate on a similarly small scale to their Burgundian counterparts, but for now, at least, their wines are easier to find—and afford. Spain also presents opportunities; collectible wines such as Pingus and Vega Sicilia are still relatively affordable.

Elsewhere in France, the Rhône Valley is particularly exciting. “Northern Rhône wines are a bargain for what they’ll be in a decade,” says Parr. “Just look at what’s happened to Gentaz and Verset,” he notes, alluding to two deceased Rhône winegrowers whose bottles, once humbly priced, now change hands for thousands of dollars. Many producers whose wines promise to follow suit can still be acquired for a modest outlay in comparison to those of Burgundy.

Bordeaux may be generating less buzz, but it also presents opportunities. Its wines are certainly available in quantity, and some experts see notable potential for growth. “In some ways, Bordeaux looks cheap,” says O’Connor of London’s Fine + Rare. “With the number of luxury hotels in China set to quadruple and similar growth going on in other developing markets, pressure will be placed on pricing of Bordeaux’s classified wine.”

That pressure will only be amplified if countries such as China and Brazil decide to reduce duties on wine, observes David Beckwith of New York–based Grand Cru Wine Consulting. “The floodgates may open, as they did in Hong Kong, and Bordeaux would likely see another significant jump in value.”

Indiscriminate investment in Bordeaux, however, would be a mistake. The simplest strategy is to follow respected châteaux that have track records of appreciation, especially in average vintages that are likely to be more reasonably priced on release. Classic producers from Pomerol and Saint-Émilion, which yield smaller volumes than their siblings in the Médoc, have proved especially remunerative over the last decade.

Another approach is to seek out undervalued wines. Ritchie suggests looking for price discrepancies between the 2009 and 2010 vintages, both acclaimed as picture-perfect years. If a given château’s 2010 is appreciably less expensive than its 2009, for example, that state of affairs is unlikely to endure long.

Investors, moreover, should not overlook Champagne. “People sometimes forget how reliably wines like Salon appreciate,” reflects Castells, “but buying some and leaving it in the cellar for 10 to 15 years is a more than dependable investment.” The same holds for most of Champagne’s têtes de cuvée, such as Taittinger’s Comtes de Champagne and Pol Roger’s Cuvée Winston Churchill. The only requirement is a bit of patience.

Risk-takers might be attracted by the prospect of anticipating the trends of the future. Clearly, the wine world is changing, and the tastemakers of the future are just as likely to post on Instagram as write in established wine journals. Producers that strike a chord with the next generation of wine lovers are already doing very well indeed.

“I’d look to the stuff sommeliers find it hard to find today,” advises Castells. “In a decade, collectors will be looking for it too.” Even a short list of such wines is eclectic, ranging from the elegant but robust Languedoc reds of Grange des Pères to the electric Anjou Chenin Blanc of Richard Leroy. Many are influenced to some degree by the natural-wine movement, and they all tend to spin compelling narratives.

“I think storytelling has entered the investment market,” says Weygandt Wines’ Leonard. Small, artisanal producers with a powerful story, he argues, “are easy to champion in the face of established blue-chip wines.” These are producers, he adds, that younger consumers are unlikely to find in their parents’ collections—a reminder that attitudes will shift as Baby Boomers hand over the cellar keys to younger generations.

Of course, it’s a lot easier to buy a pallet of cru classé Bordeaux than it is to parse the intricacies of obscure wine regions like the Jura. But for those to whom the excitement of the chase is as great a satisfaction as the prize itself, pursuing the cult wines of the future might be the best investment strategy of all.

Wine fraud is endemic for very good reasons: The ill-gotten gains are potentially vast, and the downside is relatively small compared to other forms of forgery. Counterfeiter Rudy Kurniawan, sentenced in 2013 and the subject of the recent film Sour Grapes, is the first person to serve federal jail time for wine fraud; in France, the maximum sentence for the crime is 2 years. Not surprisingly, multiple sources estimate that fully 20 percent of fine wine is fake.

“It’s a massive problem, and it’s getting worse, not better,” says Maureen Downey, authenticator extraordinaire and founder of WineFraud.com. The fine-wine trade, she believes, is “in peril” from the twin scourges of counterfeit wine and theft. Not only are counterfeiters getting better, but they’re also turning their attention to younger vintages, says Downey, “and the problem extends to less famous producers and even their more modest bottlings.”

Wine merchants, auction houses, and brokers should all undertake due diligence, but prudent consumers should also vet their purchases thoroughly. “People need to look at wine the way they look at cars, art, and real estate,” says Greg Castells, president of Martine’s Wines. “Often people ask a few questions and look at photos, but they don’t pay the same attention they would if they were buying a Monet or Renoir.” The naked eye, Downey adds, won’t suffice: Authentication requires magnification and special lighting.  —W.K.