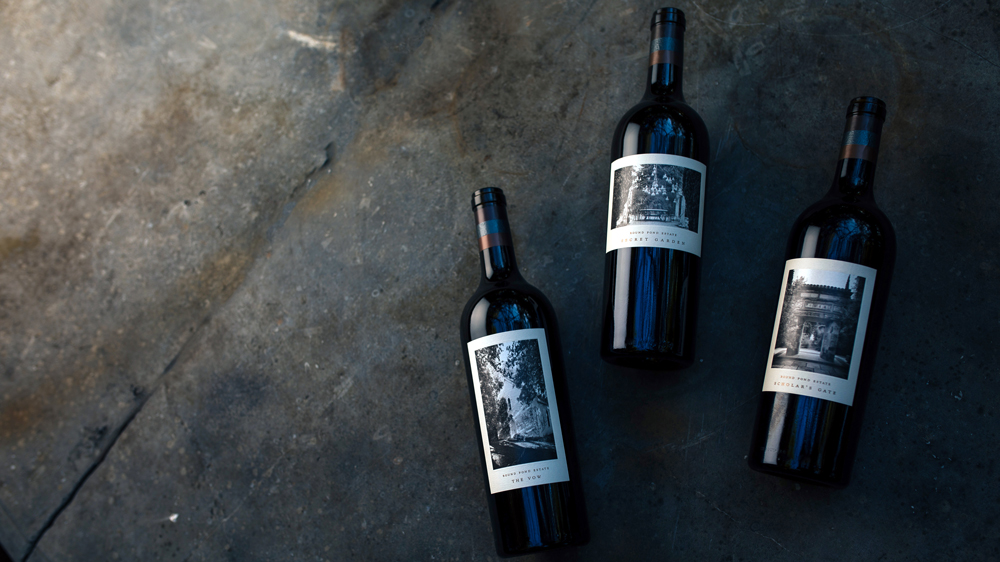 The Round Pond Estate sits pretty smack dab in the heart of the Napa Valley’s acclaimed Rutherford region, a fructuous seedbed that yields elegant grapes worthy of Pablo Neruda’s epic “Ode to Wine.” Undoubtedly one of the world’s premier viticultural regions, Rutherford is particularly suited to the cultivation of Cabernet Sauvignon, a varietal widely believed to have resulted from a chance crossing between Sauvignon Blanc and Cabernet Franc in Bordeaux in the 17th century. Cab Sauv turned out to be a most happy accident indeed, and is now the most widely planted wine grape in the world.

In the early 1980s, Bob and Jan MacDonnell bought the first parcel of land that would eventually become Round Pond Estate. After two decades of supplying grapes for other wineries, the MacDonnell family opened their own shingle in 2007. Today, Round Pond boasts over 360 planted acres adjacent to some of Napa’s most celebrated producers, including Beaulieu Vineyards and Caymus.

Launched in 2012, the Gravel Series comprises three wines ($225 per bottle), all 100% Cabernet Sauvignon culled from Round Pond’s finest vineyards, which extend beyond Rutherford.

The grapes that went into the 2015 Secret Garden came from a historic vineyard next to the Dominus Estate at the base of the Mayacamas Mountain Range in Napa’s famed Oakville bench. The ’15 Secret Garden tips ever so slightly toward delicate. It’s well balanced and fruit forward, yes, but lighter — pleasantly so — than the bulk of the Cabernet emanating from the region.

Scholar’s Gate, on the other hand, is bold and powerful, tinged with Rutherford’s signature minerality. It’s still a baby, of course. Give it a decade or so and it will develop into a fantastic tannic steak wine.

And finally, there’s The Vow, which in this observer’s opinion is the marquee offering of the ’15 Gravel Series. Sourced from a narrow strip of rocky soil that runs through the South East corner of Round Pond’s Rutherford vineyard, The Vow is an august wine. Sure, the word elegant tends to get bandied about in wine reviews like so much bluster, but in this case the descriptor is spot-on. The Vow is Beyoncé in a Met Gala gown. It’s a spin up the California coast in a Rolls-Royce Phantom. To drink it is to understand what a truly special winemaking region Napa is, and to appreciate the care and expertise required to produce world-class Cabernet Sauvignon. As the poet Neruda waxed, “that autumn labored to fill the vessel with wine.”