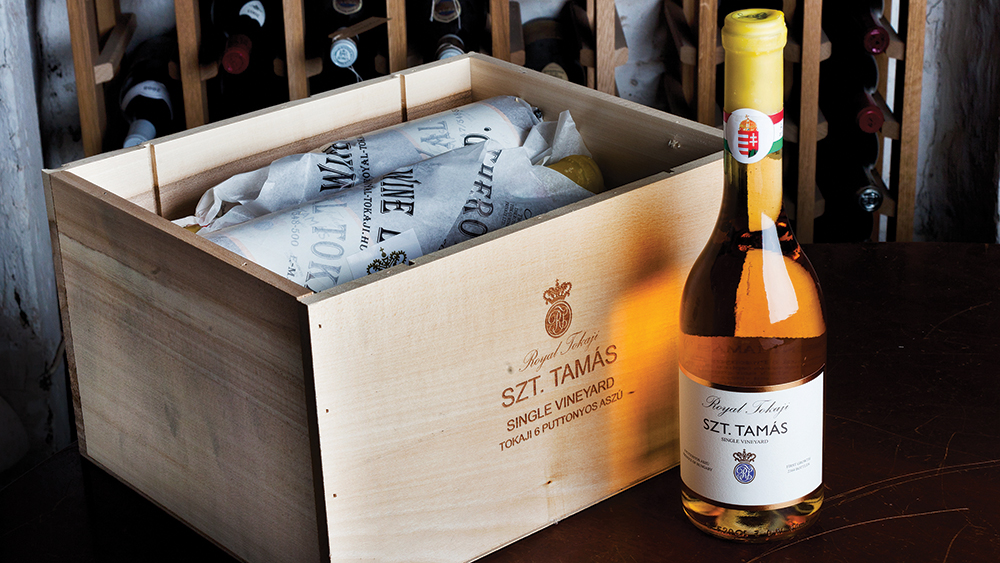 When it comes to the world’s great wines, there’s meticulous farming (leaf-by-leaf canopy management, cluster-by-cluster crop thinning…), and then there’s ridiculous farming—effort sensible only to obsessed vintners in pursuit of something approaching “the nectar of the gods.” Consider the gorgeous dessert wines of Hungary’s Tokaj region in the latter camp, and the achingly beautiful single-vineyard versions from Royal Tokaji Winery the bottles that are infusing new legend into a long, noble tradition. (Fun fact: Hungary’s signature Tokaji is the only wine mentioned in a national anthem—third verse, for the record.)

It’s said that Louis XIV of France described the sweet wine of Tokaj as “the wine of kings and the king of wines,” while Russia’s Catherine the Great stationed a contingent of Cossacks in the region to protect the vineyards and ensure the wine’s safe travels to St. Petersburg. Historical celebs—composers (Beethoven, Strauss), writers (Goethe, even Bram Stoker of Dracula fame)—favored the wine too, until Mother Nature, history and politics dealt a triple blow: In the late 1800s, Phylloxera decimated Hungary’s vineyards (the pest ravaged vineyards in most of the rest of Europe as well), two world wars interrupted production and then nationalization under the Soviet regime turned the wine industry into one of large co-ops churning out middlin’ plonk to send in large volumes to Russia (no Cossacks required).

That was then, and this is now, as they say. In the last three decades, beginning with the privatization of industry in Hungary, attention has been paid once again to growing and making fine Tokaji. Leading the charge is Royal Tokaji Winery, founded in 1990, in part by the great British wine writer Hugh Johnson, who held the wine in such high regard among the wines of the world that he co-founded a company to produce it. From the beginning, Royal Tokaji made single-vineyard wines a priority, and today the lineup includes beauties from three First Growth sites and one Great First Growth vineyard.

In the vineyards of Hungary.  Photo: Wilson Daniels

Strange as it sounds, all the fuss over Tokaji is about rot. “Noble rot,” but rot all the same. Lovers of some of the world’s other great dessert wines (notably Bordeaux’s Sauternes) know it as Botrytis, a fungus that late in the season infests vineyards—especially in moist places—shriveling the berries, concentrating their sugars and imparting an alluring honeyed, gingery character to sweet late-harvest wines. (It’s, of course, death to most dry wines, red or white.)

The Hungarians have a word for their botrytised berries and the wines they employ the obsessive effort alluded to above to make out of them—Aszú. For sweet Tokaji wines, the botrytised fruit (Furmint is the cornerstone variety, joined by five other, mostly harder to pronounce grapes—try Hárslevelü, or better yet, Sárgamuskotály) is left on the vine so long it darkens and shrivels and desiccates to an alarming degree. Aszú grapes look like a hot mess, really. But as Royal Tokaji winemaker Zoltán Kovács describes it, they’re picked berry by berry into traditional baskets called puttony. Being severely dehydrated, they can’t simply be pressed for their meager juice. They have to first be macerated for a couple of days in a non-botrytized base must to extract sugars and build richness, before the whole lot is pressed and finishes fermenting.

The wine’s sugar level was traditionally measured by how many baskets of Aszú berries were added to a quantity of base must—thus, 3, 4, 5, or 6 puttonyos. The old measurement is still used on bottles, but refers now directly to the level of sweetness in the juice: 5 puttonyos has a minimum of 120 grams of sugar per liter of wine; 6, at least 150. Royal Tokaji takes their 6-puttonyos Aszú wine up to 190 grams per liter, but piercing acidity bends that sweetness into mouth-watering appeal.

The perfect confluence of flavor development, ripeness and Botrytis doesn’t happen every year. Conditions have to support exquisite results for Royal Tokaji to produce a vintage of Aszú—which they’ve done only eight times so far this century. In 2017, conditions were superb and their 6-puttonyos single-vineyard wines brilliant. The Royal Tokaji Szt. Tamás First Growth 2017, backs gently rich peach compote and bright citrus with structure and granite-like minerality. The Betsek First Growth 2017, offers up gorgeous aromatics of spice and honey with a concentration of stone fruit, hit with black pepper on an endless finish. The Nyulászó First Growth 2017, is bright and complex, with a floral perfume around layers of apricot, peach, pear and orange, finished with lovely salinity. And the Mézes Mály Great First Growth, from one of only two Great First Growth vineyards in Hungary, is that aforementioned nectar of the gods. Spiced jasmine, honeyed apricot and hazelnut give way to rich and vibrant flavors of peach and pear—delicate and fresh for all their sweetness and Botrytis complexity.