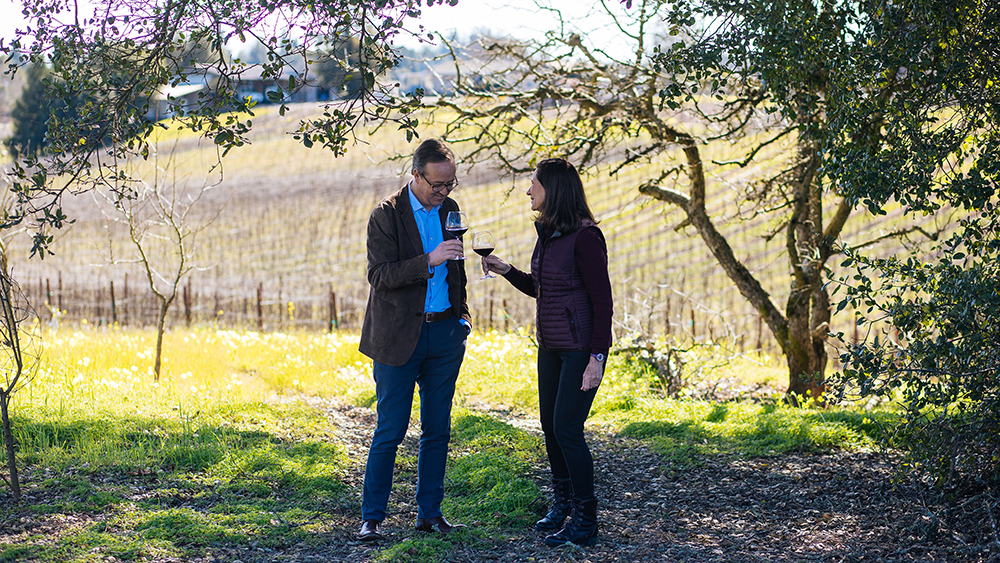 For better or for worse, more and more press releases in the wine industry these days announce the sale of a family winery to a large, global wine company. The latest might have the best opening line ever: “The story of Louis Roederer’s pursuit of Merry Edwards Winery is the stuff of a Henry James novel.”

Former English major that I was, the James reference resonated. My classmates and I were guilty of a little snark on that front, our favorite line being that the author “chewed more than he bit off,” with his endless literary twists and turns through romance and the drama of society. Yet the winery acquisition announced this time around—puzzling as it is on its face—does have the air of a courtship, and a union that might make a lot of sense in the end, in much the same way James novels tended to resolve.

In the first place, the buyer, Maison Louis Roederer—global footprint notwithstanding—is a family-owned company itself. Seven generations have tended the original Champagne Louis Roederer house, and since 1990, the family has been acquiring carefully vetted wineries around the world. Vetted, that is, for matching values, both personal and professional, according to Frédéric Rouzaud, current head of the French company. Brands they’ve brought under the family umbrella include Ramos Pinto, Champagne Deutz, and Château Pichon Longueville Comtesse de Lalande, among others, all of which share the vision of meticulous viticulture (with a focus on conversion to organics and biodynamics) and precise winemaking.

Drilling down into Maison Louis Roederer’s acquisitive history, courting Merry Edwards in Northern California seems less of a long shot. The company already had deep roots in the state, having founded Anderson Valley’s Roederer Estate as a sparkling-wine house all the way back in 1982, and Domaine Anderson for still wines in 2012, as well as purchasing Scharffenberger Cellars (also sparkling) in 2014. Still, says Rouzaud, Sonoma County wasn’t a given. “Our passion for Pinot Noir had us looking at appellations with great terroir and climate, and was not limited to the US. The difficulty in our quest was to find a winery whose vision and core values matched ours.” In describing the “find,” Rouzaud takes a decidedly Jamesian tone: “It was not until I met Merry Edwards that I felt my heart beating. Her personality, her story, her wines won me over.”

Rouzaud appears to have captured the soul of those wines: “The unique and harmonious style in which Merry’s wines combine fruit, freshness and depth—embodying the typicity of Russian River Valley—is one that I personally like and know her fans love.” For their part, those fans might know the range of single-vineyard Merry Edwards Pinot Noirs as powerful and richly fruity while managing finesse and elegance at the same time. And the unique barrel-fermented and aged Sauvignon Blanc, with a portion of heady, floral Sauvignon Musqué, is a perennially delicious favorite.

A plank in the shared vision is clearly a green approach to treatment of the land and vineyards. Merry Edwards has become something of a poster child in Sonoma on that front, with innovative systems in the winery to minimize energy and water use, as well as organic farming in the vineyard. Ironically, she once told me that at first, she resisted codifying her practices with sustainable certification (which Sonoma County is aggressively pursuing). Her hesitation wasn’t opposition to the practices themselves—“I’ve been doing all these things for years!” she said—but the paperwork and inspections, which aren’t easy or cheap. In the end, though, she came to believe it was important to make the commitment, for the wine community of which she was a cornerstone.

And clearly, Edwards sees a kindred spirit in Rouzaud, on the farming front and beyond. “There were several potential buyers who showed interest,” she says. “But I saw in the Roederer family a history of dedication to place and to maintaining the integrity of the family-owned wineries they have purchased. Their attitude is based on the long-term view, which is refreshing. Roederer buys to hold and improve.”

The decision was difficult for Edwards (“Of course!” she says). Her life in wine spans 45 years, 22 with her namesake winery. But she has been working on a succession plan since 2015, when she hired winemaker Heidi von der Mehden. And after spending much time with Roederer’s top team members, as well as Rouzaud, she was convinced that, “like us, they are a passionate, hardworking group. Many of their employees have decades of history with them. They appreciate our wines and what it takes to make them. I developed a level of trust that allowed me to move forward with the transaction and to commit a year as general manager for them.”

For all of us who deem the wines Edwards has made a Sonoma treasure, integral to the identity of Russian River Valley itself, the question that is the proverbial elephant in the room at a sale like this is, Will they retain their character? Their quality? Their longevity? To that, she shares her sense of confidence: “When I first met with Frédéric, we exchanged ideas on vineyard philosophy and land stewardship, the importance of terroir, and how Roederer would enable continuity for the Merry Edwards brand. Frédéric’s vision, combined with his personality, made for an easy connection and a decision I am very comfortable with.”

My sense is that this tale will have a prolonged, James-worthy ending. I hope it’s satisfying.