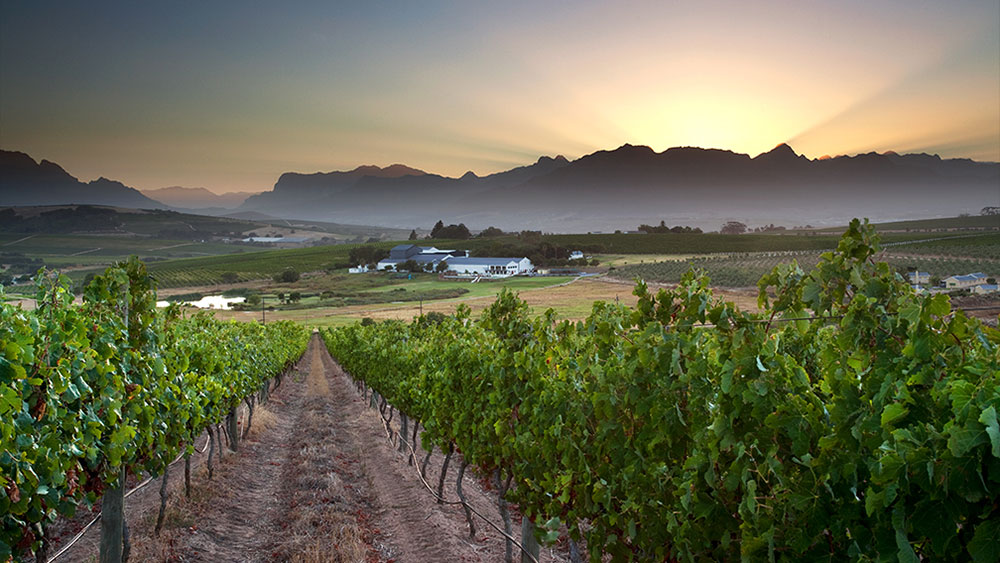 The universe of wine has a tidy delineation—the Old World and the New. Falling on the “Old” side, of course, are the European countries: France, Italy, Spain … where wine has been produced (and perfected) for centuries. “New” contains the US, South America, Australia, New Zealand, where winemakers have fast-tracked transforming their experience into superb wines. But where, in this scheme, does that leave South Africa? The first grapevines were planted in Africa’s southernmost country all the way back in 1655 by members of the Dutch East India Company. And yet as recently as a quarter-century or so ago, there was little on the wine front there likely to take the world by storm. That’s not to say there was little wine, but to put it bluntly, quantity trumped quality.

As in much of the world, Old and New, the fate of winegrowing, making and marketing in South Africa through the centuries was tied to colonization, international relations, wars and politics. A deep dive even leads to the important English market drying up as the island nation’s ties to France warmed. In modern terms, though, it’s enough to know that the Apartheid regime in South Africa did no favors for the quality of the country’s wine. But with democracy prevailing in 1994, producers have put that New World pace of evolving wine quality on steroids. All of which is to say that if your last taste of a South African wine was of a Pinotage, say 20 years ago (no shade on current versions of the country’s unique blend of Pinot Noir and Cinsault, or Hermitage as it’s called on the ground), it’s time for a refresh on what is now a dynamic industry focused on learning the capabilities of an amazing range of micro-terroirs to turn out terrific wines with unique character.

There’s no better place to start than with Chenin Blanc, the most-planted variety in the country. In fact, says Ken Forrester—dubbed “the godfather of South African Chenin” for his role in steering the conversation about the white toward quality—“we believe Chenin Blanc was one of the first grapes delivered to the Cape some 350 years ago. But we didn’t know it was Chenin until about 1960.” Now, with some 60 percent of the world’s vineyards of the variety—and bottles that can go up against any of the greats in the Loire Valley—South Africa pretty much owns Chenin Blanc.

Forrester describes the malleability, and the potential, of the white variety, calling it almost a “mystical grape” in its ability to mirror the conditions where it’s grown: “If it’s a cool place, the wine is all about green apples, pears and white blossoms; if it’s warmer, it can show impressive minerality.” Getting to Chenin’s best self, he says, is akin to “calling cats.” It’s a wine, too, that takes to a variety of styles, from bone-dry to a touch sweet (a range it displays in the Loire as well), crisp and stainless-fermented to more mouth-filling and textured with oak treatment, even sparkling and as fodder for good brandy (a use to which it has generously been put in the past).

With no fewer than seven Chenins in his Ken Forrester Wines program, he’s pursuing “research” on multiple fronts. The Ken Forrester 2019 Old Vine Reserve Chenin Blanc from the Stellenbosch region shines a spotlight on the wealth of old vineyards in this country that belie its New World designation. “South Africa’s old vineyards give off a certain energy,” says Forrester. “They are incredible sites that need to be expressed.” With just a little bit of oak to round it out, this one is both fresh and a little rich, with juicy apple, nectarine and Meyer lemon layered with a pretty minerality, white blossoms and a touch of spice lingering long in the mouth. “These wines are palate-revivers.” Forrester says. “Put some spicy shrimp on the barbie!” (Sounding all the world like someone from another country in the Southern Hemisphere.) “Or seven different kinds of oysters on a really large platter.”

With the country’s main wine regions swathed along the Western Cape, where two oceans converge—the Atlantic and the Indian—it’s no surprise that South Africa is producing wines of this caliber. It shares the marine-influenced Mediterranean climate that nurtures some of the world’s best wines, with an extra-cooling effect from the Benguela Current flowing up from the Antarctic. And mountains supply a myriad of elevations, aspects, and diverse, ancient soils. What is surprising—shocking, really—is how affordable these Chenins are … for now.

To the question of which of the worlds these wines inhabit, I’d call it an Old World region with a New World soul.