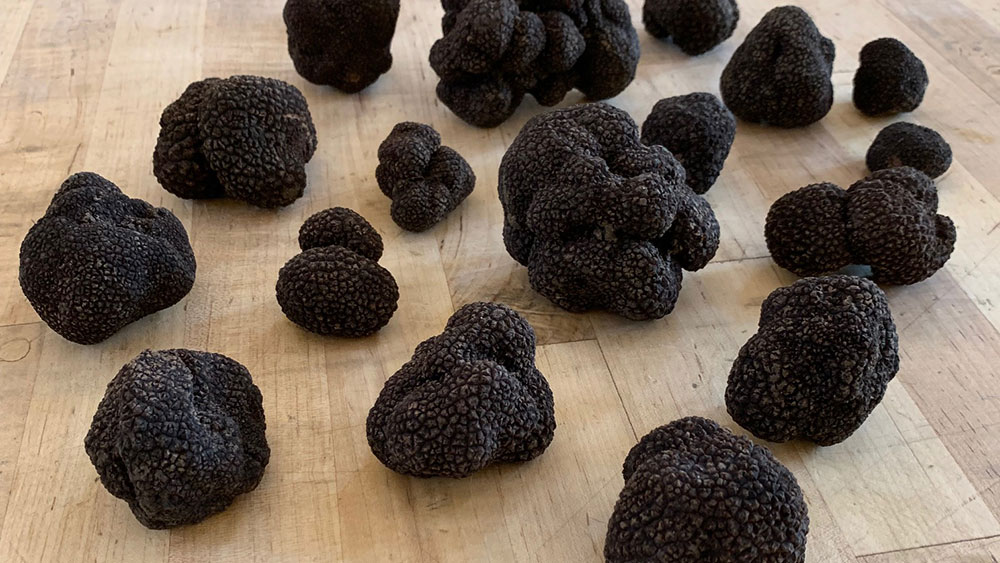 Sonoma locals know that some of the best farm-to-table cooking in the county isn’t in a restaurant (as good as that gets here)—it’s at a winery. With about four acres of gardens on the grounds, tended by culinary gardener extraordinaire Tucker Taylor (a.k.a. Farmer T, who in a former life laid out the French Laundry garden), Kendall-Jackson Wine Estate’s chef team of Justin Wangler and Tracey Shepos Cenami can harvest all manner of esoteric vegetables, greens and herbs in the morning and work them into dishes for the day’s wine and food pairings before their first guests are greeted at the door. The trip produce makes from this farm to the table is measured in yards, not miles.

This season, for the first time, the chefs are weaving into their fresh fare a taste of luxury—black Périgord truffles—shaved over warm fingerling potatoes, maybe, with lemony spinach salad and melty cheese (an astonishingly good match with Sauvignon Blanc) or red wine risotto topped with parmesan foam (Jackson Estate’s 2014 Pinot Noir from Anderson Valley is the perfect foil here). And the best (and most promising) part of the deliciously pungent picture is that these truffles are not, in fact, from France. They are house-farmed funghi that travel only slightly farther than Kendall-Jackson’s other produce from its source to the kitchen.

Don’t expect detailed directions to the winery’s truffle farm, though. Just as they are in France and Italy, truffle sources in Sonoma are closely held secrets. In this case, the 10-acre truffle orchard, planted in 2011, was the vision of the late Jess Jackson. And the project is out in front of a nascent, county-wide truffle industry. Growers buy seedlings—hazelnuts and a few oaks, for K-J—already inoculated the black Périgord fungus. From planting to the harvest of mature truffles, according to Fran Angerer, owner of the Alexander Valley Truffle Company (that’s a red herring; K-J’s truffle orchard is not in Alexander Valley), the wait is 7 to 10 years. “Or never!” he exclaims. (Angerer is still waiting for his own trees to bear fruit.) You can do all the groundwork to make sure the soil has the right pH, you can even see the mycelium, but there’s no guarantee it will ever yield a mature truffle. “Nobody has found out yet what triggers fruiting,” says Angerer.

And so growers wait. In the meantime, they acquire and train truffle dogs, the adorable Lagotto Romagnolo breed that has been found to be the parent of all of the popular hypoallergenic water dogs today. Not only do they genuinely appear to have a hyper-keen sense of smell and affinity for pungent truffles, but they also look less suspicious on an Italian forest road than a pig on a leash. (There’s also the fact that they relinquish their hold on the prize much more good-naturedly than the old-school pigs.) There are some 10 truffle growers now in Sonoma County, but the amount of truffles harvested is hard to track. As Angerer puts it, “After they plant their trees, everyone talks and talks and talks about truffles—until they actually have some. Then they go quiet.” That might be a function of price—up to $800 a pound for the highest grades of these Périgord blacks.

In the orchard with the truffle dogs.  Photo: Courtesy of Kendall-Jackson

The yield from the K-J orchard (also presided over by Farmer T, whose photography on Instagram is enough to inspire anyone to grow their own veggies—and truffles) has been steadily rising over the last several years. Last year the team harvested some 35 pounds. And lacing the luxury product into food pairings now at the winery tracks with the entire range of Jackson Family Wines, which includes the exquisite Vérité, Cardinale, and Lokoya labels (among many other terrific ones).

An appointment for a wine and food pairing at Kendall-Jackson is extra decadent these days, if just as local. As always, you will have a chef personally explain each dish at your table, only now, he or she might shave some black gold over the top.