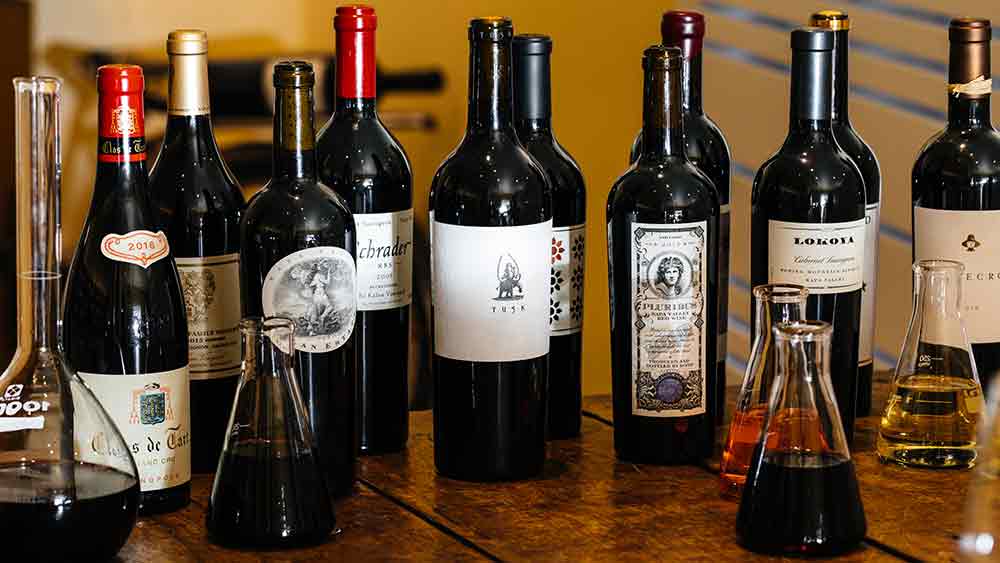 Rarely has logging into Zoom come with the expectation of fun. In the old world, it was all about cross-country video conferences. But as I open my Zoom account in our new reality, having been invited to a “meeting,” I have five bottles of wine open in front of me, and the person who appears on my screen is Karen Williams, proprietor of Acme Fine Wines in St. Helena, Calif. Before Californians were directed to shelter in place, Williams and her team would host customers in their shop—brimming with bottles few people know about yet and others few people can get unless they’re on a producer’s allocation list. Usually Williams first teases out a customer’s wine preferences, then she leads them through a customized, information-rich tasting. But those days are temporarily suspended. Acme is offering the same tasting experience now for this new period: “The Isolation Libations Tasting Package we’re calling it,” Williams tells me.

As we sip and spit (both of us are working, after all) the first wine—Dana Estates 2015 Vaso Sauvignon Blanc, Napa Valley ($76)—Williams explains the back story. Serious collectors know Dana for its exquisite single-vineyard reds, most going for north of $500 a bottle. All this time, though, proprietor Hi Sang Lee had been making less-expensive Vaso and importing it back to his native Korea. Last year, according to Williams, he acted on a “spirit of generosity,” a wish to get wine into the glasses of people for whom Dana’s reds are out of reach, and made Vaso available here. For the record, the Sauvignon Blanc is bright and pure but mouth-filling, streaks of limestone layered with citrus. Williams calls it “fleshy—halfway between what Chardonnay lovers like and what typical Sauv Blanc drinkers love.”

The next wine is a complete mystery to me: Complant 2017 Linda Vista Vineyard Chardonnay, Napa Valley (only $36). Williams fills in its pedigree: major stints by owner Daniel Baron at Chateau Montelena, Château Pétrus, Dominus and Silver Oak Cellars; and the vineyard it comes from is owned by high-on-the-radar vintners Steve and Jill Matthiasson. That’s a lot of experience and expertise for the price. And the wine over-delivers (a thing Williams wants all her wine discoveries to do) with crisp green apple, lovely floral notes, bright citrus, hints of a savory salinity and wet slate.

Williams describes the first red—Marnet 2018 Campbell Ranch Vineyard Pinot Noir, Sonoma Coast ($65)—as though from a friend. “We get to know all these people!” she says, “Sometimes even before they launch their brand. We couldn’t have this business anywhere else. You just don’t get barrel samples in Omaha.” In this case, the winemaker is Dan Ricciato, who has worked for high-profile consultant Thomas Rivers Brown for many years. And his first-vintage Pinot—distinctively spicy, with tart red fruit, savory tea notes, a little forest floor and good structure—is a tribute to the much-loved late vineyard manager Ulises Valdez, who made the Campbell Ranch fruit available to Ricciato (“For you, amigo, I only want you to have the best,” he had said, Williams relates). With Valdez’s death last year, this will be Ricciato’s only bottling of Campbell Ranch Pinot.

The producer of the next red, according to Williams, has carved out an allocation for Acme because of an early relationship. She has a habit of buying up wines as she discovers them—being their “invoice number one,” as she calls it, and staying with them “until they’re stars.” Apparently they don’t forget, and in fact, they send their own would-be customers to Acme when they have no more to sell. Such is the case with La Pelle 2017 Cabernet Sauvignon, Napa Valley ($75), made by up-and-comer Maayan Koschitzky (whose day job is managing the legendary Philippe Melka’s wine-consulting business) in partnership with Miguel Luna and Pete Richmond, partner and founder, respectively, of Silverado Farming Company. Labeled with a distinctive shovel—the only tool used in both vineyard and cellar—the La Pelle is simply a whole lot of Napa Cab for the money, layered with lovely red fruit (strawberry, plum) and florals and perfectly balanced acidity and tannins.

Have some dinner ready to pair with your tasting.  Photo: Emma K Morris

The last wine, The Crane Assembly 2015 G.B. Crane Vineyard Cabernet Sauvignon, Saint Helena ($225), compels me to stop spitting. It’s a high-octane mouthful of anise-spiked dark berries, beautiful aromatics, and robust tannins that, incidentally, includes splashes of Syrah and Merlot. Serial entrepreneur Dave Phinney (who created The Prisoner back in the day) and his partners have preserved a slice of history in this one. Only about a mile from the Acme shop, the precious few acres of head-pruned vines it came from were planted in the late 1800s by Napa Pioneer George Belden Crane.

Histories, back stories, technical details, tales of personal transactions and relationships … that’s the satisfaction of tastings in wine country. Acme isn’t the only merchant bringing the virtual tasting to your screen. Others and wineries are getting in on the act (a current list is below, though it’s evolving by the hour, so check back in as we expect to update it as we hear of more). And many of these exclusive opportunities might be even better than going to a tasting room, where you rarely get to meet the founders or winemakers themselves.

Acme Fine Wines is offering customized, by-appointment tastings via Zoom or phone, as well as tastings of their monthly wine club shipments. Of course, you don’t have to open five bottles, and you might not want a spit cup at your elbow. But do have your favorite takeout waiting on the table, to enjoy with the wines once you log out.

Clos du Val: Starting this week, the winery is offering choices of virtual tastings with a member of the team—a red and white four-bottle pack ($385), an all red four-pack ($395), or a four-pack of your choice, which will also come with a virtual tasting (and a Coravin!).

Far Niente and Nickel & Nickel: These sister wineries will be launching virtual tastings with their winemakers soon.

Fess Parker Winery & Vineyard: This Santa Barbara producer will be rolling out a series of virtual tastings with winemaker Blair Fox and Parker family members in the coming weeks.

Inman Family Wines: Winemaker Kathleen Inman is launching a virtual wine-tasting program. You can choose one of four three-packs of her Sonoma Pinot Noirs, Chardonnay, Rosés, and sparklers, then join her during scheduled “Meet the Maker” happy hour tastings via Facebook Video Chat, where you can enjoy the wines with fellow wine lovers (5 percent of the proceeds will be donated to Meals on Wheels).

Kendall-Jackson: Launching the week of March 23, “At Home with Kendall-Jackson” will be a series of short-format virtual wine-tasting videos with winemaster Randy Ullom or a member of his team, broadcast to the winery’s Facebook and Instagram channels. Down the road, look for themes like Re-Stocking Your Cellar after Depletion, Virtual Yoga: Vino & Vinyasa, and Virtual Cooking Classes with K-J’s Culinary Team (which is amazing, I might add).

Lodi—yes, the entire region. As of the beginning of April, the AVA will highlight a winery every Friday for the next few weeks. The winery will ship the wine to you ahead of time, and you can join the virtual tasting on Facebook Live or Instagram Live.

Memento Mori: This Napa icon is testing out virtual tastings of their signature Cabernet for one to eight people through Zoom. They’ll send you the wine ahead of time, and then you can schedule the tasting with one of the founders. Their motto of “Remember to Live” seems especially appropriate in these times.

Parallel Napa Valley: You can schedule a guided tasting ($95 per person, but complimentary for up to four people with a membership) with general manager Adrienne Capps, covering three wines: the Russian River Valley Chardonnay, the Napa Valley Cabernet, and the Black Diamond Reserve Napa Cabernet. The platform can be FaceTime, Skype, or Zoom, with a limit of eight tasters.

Sosie Wines: This maker of wines from across Napa and Sonoma is offering virtual tastings with the proprietor or member of the winemaker team (email tastings@sosiewine.com). The wines to the San Francisco area will be delivered through their own “blue glove” delivery service, with reduced shipping rates to the rest of the country.

St. Supéry Estate Vineyards & Winery: A member of the winemaking team will host a virtual tasting every Thursday afternoon (at 3:00 or 5:30 pm PDT) for the next six weeks, each week discussing a different wine in a six-pack they’re making available at special rates. (Zoom is the platform, with Facebook Live a second option.)

Wine Access: This online retailer will be launching a Facebook Group on March 21, to connect winery partners and members; the group will host virtual tastings and share info on special offers.