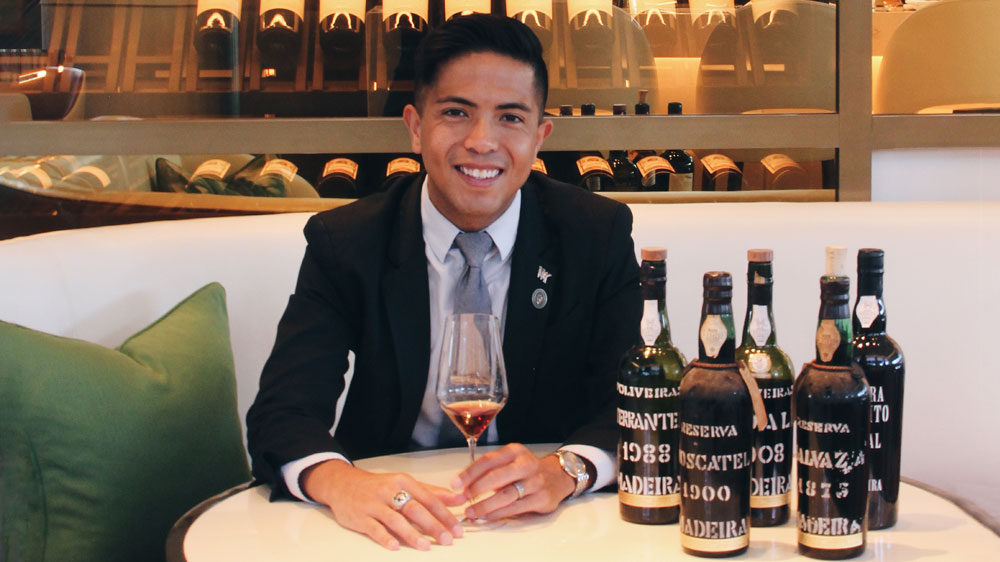 “Do you want to taste the ’75?” Jordan Nova asks, with the subtlest raise of an eyebrow. Nova is the wine director at the new Waldorf Astoria Beverly Hills and he has a serious thing for Madeira. At the moment, eight vintage bottles are on the menu of the hotel’s Jean-Georges restaurant, with dozens more resting in the cellar. We wander in and he pulls out the ’75. The 1875. And then a 1900.

Nova, who just turned 28, has put together one of the deepest lists of Madeira in the country, at a time when old-and-rare Madeira is making the crossover onto young-and-hip wine lists. His selections range from the 1875 D’Oliveira Malvasia to a 1996 Broadbent Colheita, for $24 to $230 a glass. He serves Madeira before or after a meal, and paired with sweet or savory dishes. It is that versatile. Made mainly from four grapes—Sercial, Bual, Verdelho, and Malvasia—on the Portuguese island of Madeira, it is aged with blasts of heat, creating an amber wine rich with the flavors of hazelnut and caramel, but balanced with a rippling acidity that’s missing in port or sweet sherry. It can be dry or sweet, fruity, or savory, and unlike almost any other wine, it continues to gain complexity far beyond the century mark. We asked Nova—whose career includes time in the cellar at Daniel Boulud’s Dinex Group in New York City, Chef Mavro in Honolulu, and Spago in Beverly Hills—to tell us more.

Was there a particular bottle that turned you on to Madeira?

Many years ago, I was at a restaurant in New York City and I saw 1867 Madeira on the menu. So I asked the waiter, Wow, do I want a glass? And he looked at me and said, in this very thick French accent, Sir, it is 1867. You want a glass. That was an interesting moment: He had just sold a $600 glass of wine! But that was also the moment I realized what’s so romantic about wine: Everyone who spent hours in the vineyard to pick the grapes, or weeks in the winery to make the wine, or years stewarding the wine over the long aging process—all that energy, and all that’s left is that bottle.

Is that sense of history the big appeal?

Yes, and Madeira is also one of the few things that you can taste going back that far and still have a viable, drinkable product. When you drink wine from the 1800s, you’re drinking the novelty of it—it’s past its prime. But Madeira continues to age and change and get better.

Do you list all the Madeiras you have in the cellar?

We have a few things that I keep back. I like to have a birth-year wine or anniversary-year wine available for people, so I try to keep as much as I can. We have 32 bottles in the cellar right now, but we’ve sold about double that since we opened in June—about 60 bottles so far. It’s really hot. I’ve never sold so much Madeira.

What is the most popular bottle?

Not exactly a birth-year wine! Why do people go for it?

It’s interesting. For the younger wines, the 1996 and 1988, the price will sell them to those who truly want Madeira. But they also almost frame the exclusivity of the older wines on the menu. If you just have something from 1908, it’s like, OK, that’s nice. But when you frame it with the 1996, people feel like, I don’t want the 1996, I want the 1908. I haven’t understood that yet, but that’s how the market is responding. And financially speaking, the prices of Madeira have been kind to restaurants. Single bottles of current-vintage Burgundy cost more than 150-year-old bottles of Madeira. And Madeira doesn’t expire over time. You can keep them open for weeks or even months without any issues. We’ve only been open since June 1, and every bottle has lasted only about two or three weeks.

Is there much variation among the super-old vintages?

I haven’t found big differences between, say, 1875, 1876, and 1877, but when we’re splitting them into 1850s, 1860s, 1870s, there is. The variation isn’t so much in flavor, it’s more in the intensity of flavor and the intensity of the acid, the weight or broadness of the wine, and the perceived sweetness or not-sweetness. For older Madeira, it becomes less about the wine tasting of individual flavors like caramel and hazelnut and more about the feeling of it on your palate.

Is there a particular bottle you’re chasing now?

Yes, it’s one of my favorite bottles I’ve ever had: The 1900 Moscatel from D’Oliveira. The Moscatel grape was banned from Madeira production—the last bottles in existence are the 1900 vintage and the last producer was D’Oliveira. So all that’s left in the world is in the cellar at D’Oliveira. It’s a very romantic story, and it’s my favorite Madeira to drink, too. Even at 117 years old, it’s so fresh, so fragrant, so perfumey, so vibrant and luscious. When we’re drinking these older Madeiras, it’s usually the sweeter versions of Bual or Malmsey—and you wouldn’t want more than a glass. The 1900 D’Oliveira, you could sit in a corner with a bottle all by yourself and enjoy it for hours. That’s the one we’re always trying to get some more of.

Do you have a secret source?

There are really so many great sources for old wine from private cellars, but I don’t feel comfortable buying that here. Everything we serve has to come directly from the bodega, the maison, the chateau, or whatever it may be, or from an importer that buys directly from their cellars. For Madeira, we work with Rare Wine Co., and you can buy some great wines on their website too.

When does Madeira start to come into its own?

I think they get exciting after about 50 years. But it also depends. Are you drinking purely for the enjoyment of Madeira? Or to have a fine pairing with food? Or to celebrate a milestone, an anniversary of sorts? If I just want to sit at the end of the night and have a rich, deep glass, then Madeira from the 1960s or earlier is perfect. But the other day, I was eating a bowl of ice cream with the 1988—an older Madeira would have been too rich. Younger Madeira has this wonderful brightness about it. It still tastes caramelly and hazelnutty, but it also has a brighter fruitiness, and that’s what you want with ice cream.

What is your favorite pairing?

Passion fruit desserts with aged Madeira. The fruit makes the old Madeira taste young and vibrant, and the Madeira helps the fruit feel more complex and gives it more depth. It works with other orange fruits too, like apricots or peaches.

We stay away from small port wine glasses or spirits glasses and use a white-wine glass. The standard wineglass opens up the nose, opens up the aroma, and lets everything jump out of the glass. One of the best things about Madeira is that it’s fragrant and aromatic, and this way, it filters it up and out.

Broadbent has great consistency over time, and D’Oliviera has so many  wines with so much incredible quality. Barbeito is another one, their style is a little brighter and fresher. Between those three, you’ll always be able to find the vintage you want, and that’s the exciting thing: You can give a meaningful vintage with the assurance that the wine will be solid and taste good.