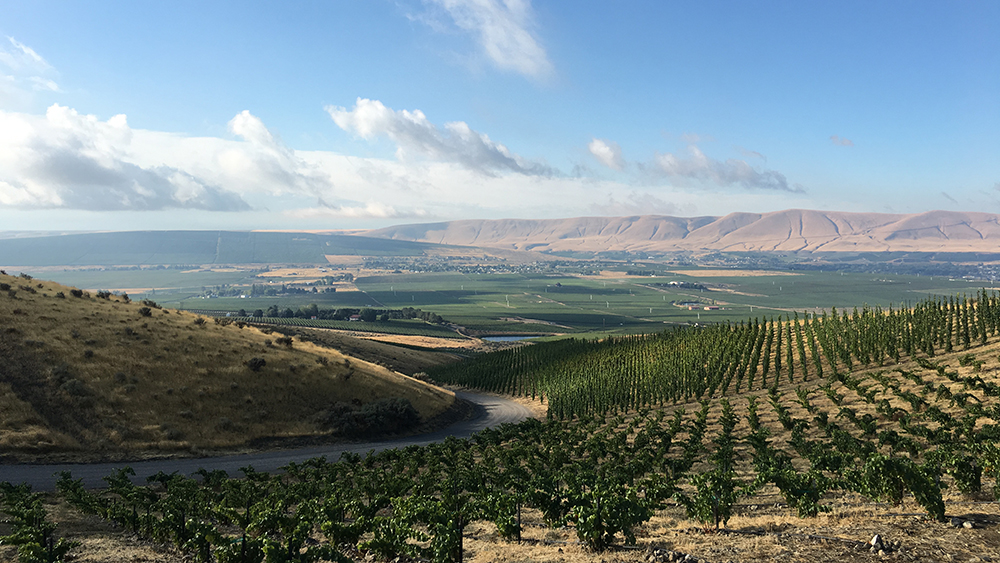 On the ridgeline of Red Mountain, one of Eastern Washington’s smallest (and warmest) wine regions, there are vineyards where no one thought any grapes could grow. And they resemble no others in the state—or the New World, for that matter. Explaining his plan for a block of Syrah, viticulturist Ryan Johnson might as well be describing the vine logistics on a pitched slope in France’s Northern Rhône.

The new WeatherEye Vineyard comprises 50 blocks covering 30 out of the 360 total acres on the property (purchased in 2004 by former Microsoft executive Cam Myhrvold, Johnson’s partner in the venture), and the vineyard does, in fact, take much inspiration from the Rhône Valley. Johnson, one of the state’s most respected viticulturists, spent more than a year on the mountaintop studying its soils (a lot of fractured basalt lava covered by the barest coat of windblown soil) and minutely varied aspects, to decide what to plant where. “This is crazy terroir up here,” he says. “With all the undulations and changes in soils… you end up with islands.”

Interlaced among the isolated blocks of vines are natives he spared (pungent sage) and botanicals he has planted (lavender), hoping they’ll help capture a wild savoriness in the wine. Add in higher levels of acidity and lower levels of sugar from the cooler temperatures at this elevation, along with intensity and power from thick, wind-buffeted skins, and WeatherEye wines have the potential to age.

One new producer, Liminal winery, is putting WeatherEye’s potential to the test. They have the first wines from the vineyard in barrel: Syrah, Grenache and Viognier from 2018. An advance taste with winemaker Chris Peterson (partner in Liminal with Marty Taucher, also a Microsoft alum) justifies the excitement. The winery’s High Canyon Block Syrah is a ringer for a Côte-Rôtie—dense, textured and peppery, with a distinct earthiness under dark-berry fruit and black-olive notes. The Grenache, also from the High Canyon Block, is big-shouldered and impressively complex for such young vines; layers of crushed stone and savory herbs underlie juicy red fruit. “We’re just trying to capture the terroir and the avant-garde tenacity of Ryan,” says Peterson.

With notoriety comes heartbreak: The first-tier allocation list for Liminal wines is already closed. Members will be invited to a barrel tasting in March 2020, and whether they can come or not they’ll have the chance to buy a three-bottle pack, slated to be released in fall 2020. (The reds will likely be in the $80 to $85 range and the Viognier about $60.) But all is not lost: A second-tier waiting list is still open (but with no allocation guarantees).

Liminal is the first brand solely dedicated to WeatherEye wines, but according to Johnson, seven Washington producers have dibs on fruit from these exotic “island vineyards.” Look for a Granache from Sleight of Hand Cellars, a Grenache-based blend from Upsidedown Wine, a Graciano blend from Devium Wines, a Grenache Blanc from Two Vintners, a Viognier from Kobayashi—and a top-secret project from the viticulturist himself, who has the sharpest bead on the vineyard. As Johnson, who has worked 20 vintages on Red Mountain, puts it, “There’ve always been rocks and wind up here—just no imagination.”