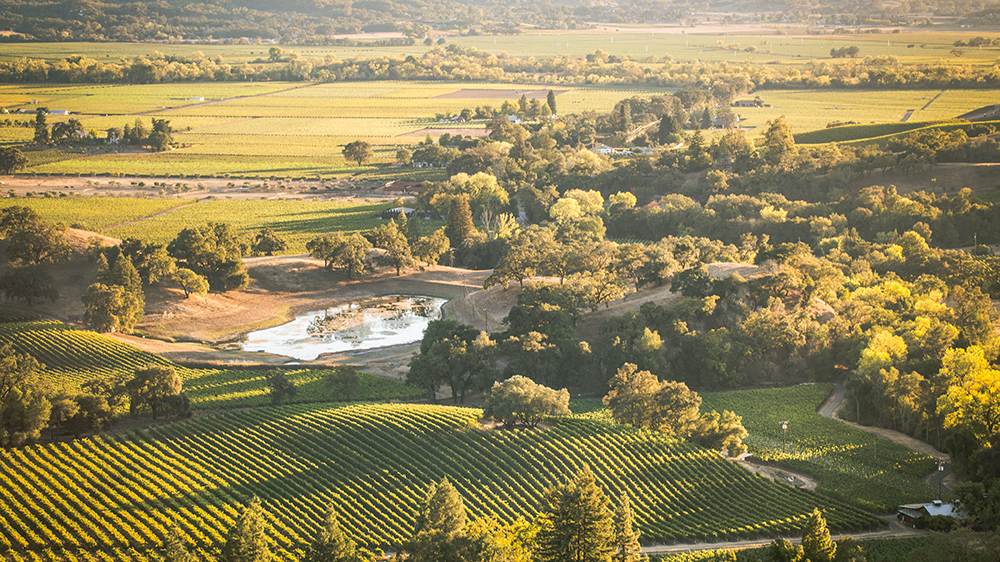 On October 24, Justin and Karin Warnelius-Miller had just finished punch-downs on the first 2019 Cabernet they had picked from their family vineyards at Garden Creek when they got the alert that a fire had started in the mountains in their neck of the woods—northeastern Alexander Valley. Sure enough, they could see a small red glow. But for vintners who lost a whole vintage of one of their most important wines to smoke taint two years ago, in the 2017 Tubbs Fire, the impulse in the face of distant flames is not to run. It’s to harvest more grapes as quickly as possible. The call went out to their Gonzalez crew. “They’ve lived on the property as long as we have,” says Karin. “They responded without hesitation, and, with headlights and overhead tractor lights, we managed to pick four tons.”

It wasn’t long, though, before the wind picked up, smoked filled the air, and, as Karin describes it, “Fifty-foot flames were coming at us from every direction.” In the dark, Justin and the crew flew into motion with the water resources at hand (working only with a generator, because the power had been turned off earlier in the day). Justin had a 500-gallon tank ready to go behind a tractor; five old 5-gallon backpacks (called “piss pumps”) were pressed into service; hoses were out; and everything was watered down—winery siding, their house, sprinklers running full-bore in the vineyards.

For her part, Karin says, she ran out to the middle of the road to flag down a fire truck, two of which finally responded to calls. As Karin describes the scene, “every hill was on fire in every direction. Oak trees we loved on the property were fully engulfed with flames like Roman candle fireworks. Embers were flying in every direction.” When a firefighter asked where their buildings were, she pointed. “That old barn, it’s not just a barn—it’s our winery, and it’s worth millions of dollars to us! Our lives are in that building. Please, please help us!”

Finally, Karin says, she realized that one parent needed to live through the insanity (the Warnelius-Millers have two children, who were off-property for safety), and she headed out in her car, yelling “I love you!” to Justin. She wasn’t sure he heard.

Not far away, Alexander Valley icon Jordan Vineyard & Winery was also under immediate threat when the fire broke out. An intrepid firefighter took a stand against a spot fire that was about to encroach on a corner of the property, but, he told John Jordan later, “it was the 60 cows grazing on that corner of the ranch that really helped—they had left no ground fuel for the fire.” But Jordan already knew that. According to Lisa Mattson, director of marketing and communications, “That’s one of the main reasons he has so many cows—they’re integral to our fire-protection plan.”

Inside the broad outlines of an estate’s fate in the fire (“the winery, residences, garden, vista, vineyards and pastures have no damage,” reports Mattson), is internal chaos, invisible beyond the fire zone, over the logistics of carrying on. In the face of wide-spread power outages, broad evacuations and the continuing threat of flames in strong, capricious winds, the staff at Jordan had to protect wine in open-top fermenters from smoke and continue every process necessary to keep 2019 on course to becoming the bar-setting Cabernet that Jordan is known for.

For a couple of days after the fire broke out, winemaker Maggie Kruse (who recently succeeded the much-respected Rob Davis) had access to the winery. “I was so worried about losing wine to smoke taint,” says Kruse. At 4:00 a.m. the night the fire broke, she raced in to close ceiling vents and turn off fans, to keep the smoke out, but at the same time open doors to the warehouse and barrel room, to dissipate dangerous CO2 collecting from the fermenting wine. But come the weekend, she was forced to evacuate her Windsor home with her family, when the fire began bearing down on that town. “We had been working so hard on this amazing vintage,” she says, “it didn’t seem right to be leaving it behind.” Getting her 5-year-old daughter out of harm’s way was, of course, the priority though, even if she “thought about the winery constantly.”

In a blur of fast-moving needs, every member of the team did what they had to: Kruse gave the operations director a tutorial by phone on how to carry out pump-overs. (It would turn out that he couldn’t return to his home because of smoke damage.) The ranch and vineyard manager evacuated the large animals on the property to his family’s ranch to the north, in Mendocino’s Potter Valley, keeping a wary eye on a fire there while hauling supplies back to Jordan—gasoline for the generator, for instance—to keep operations going, sans any other employees, who were summarily dispersed by their own evacuations.

When Kruse was finally able to get back to the winery, her stomach was in knots, she says, as she drove up the Jordan driveway. “When I opened the lid of the first tank and smelled the delicious aromas of Alexander Valley Cabernet, I teared up. Our wines didn’t smell like they had any smoke taint at all (although they were in desperate need of a pump-over). I felt so lucky.”

These are the dramatic and intensely personal experiences behind the stark numbers that are all most of us know about a devastating conflagration like Kincade. As of this writing, 77,758 acres have burned and 352 structures have been destroyed, including 165 homes (one of which was Julia Jackson’s, of Jackson Family Wines) and at least two wineries—Field Stone and Soda Rock. The good news is that the fire is 78 percent contained, most of those evacuated have been allowed back to their homes, and much of the power is back on. More importantly, no lives were lost (four of the more than 5,000 firefighters who joined the operation sustained injuries).

Yet in Alexander Valley, about 20 percent of the fruit was still hanging in the vineyards the night the fire broke out—a significant loss.

While the Warnelius-Millers saved their winery and their own house, they lost their crew’s housing and grapes critical to their Garden Creek wine. But in recovery mode, what Karin thinks of is the connections inherent in the industry and of others who might have severe loss columns too. But in recovery mode, Karin thinks of the connections inherent in the industry, of others who lost more than fruit. “We are a very tight community in Alexander Valley,” she says. “We work hard together and count on each other for most everything. Our friends the Wetzel’s at Alexander Valley Vineyards, the Jordans [whom they sell fruit to], Barbara Banke with Jackson Family, the Greens at Hoot Owl Vineyards, the Young Family at Robert Young Vineyards, the Hafners at Hafner Vineyards… We’re in it together. You can’t stand alone as farmers.”

And from Lisa Mattson (with no knowledge of Warnelius-Miller’s thoughts): “We are eager to get back into Alexander Valley so we can visit our grape growers—we have 10 in and around the Kincade burn zone. You probably heard about what happened at Garden Creek. Once we’re back together in Healdsburg and fully operational, we’re committed to helping them, and other growers, recover.”

Warnelius-Miller pictures “enjoying a beautiful glass of Alexander Valley wine” with her neighbors soon. This would be a good time for the rest of us to stand with them—and the larger community affected by the fire—by digging into our cellars for a bottle of Sonoma wine to pop open tonight.