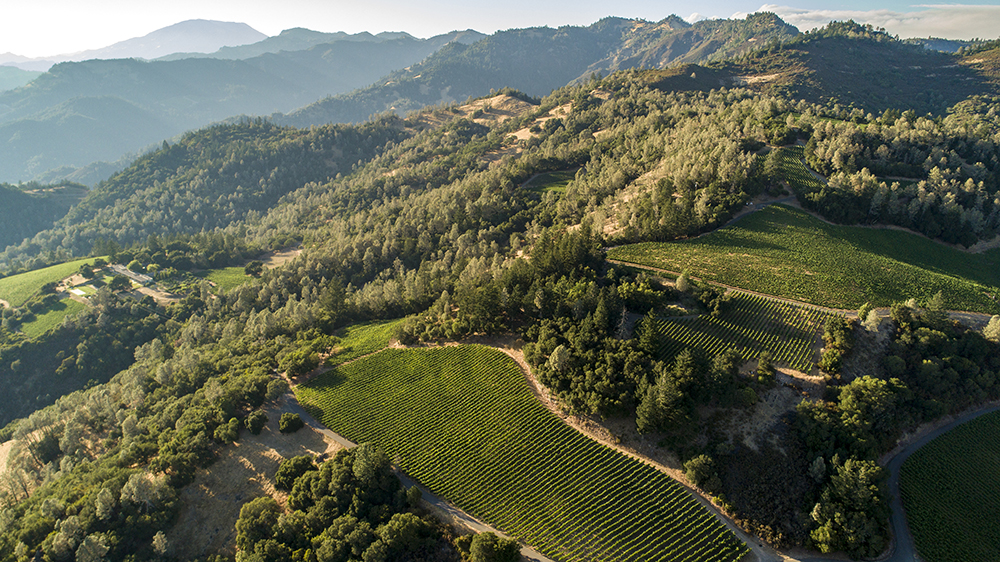 California’s wine capital is best known for fruit-forward, high-proof, ready-to-drink wines. But a recent shift toward a more restrained and age-worthy style favors grapes from mountainside vineyards, with wineries such as Lokoya, Girard, Lamborn and Michael Mondavi Family growing in the high-altitude American Viticultural Areas (AVAs) of Howell Mountain, Atlas Peak, Diamond Mountain District, Spring Mountain and Mount Veeder. These sites can climb as high as 2,700 feet above sea level, similar to the soaring vineyards of Argentina’s famed Mendoza wine region. It’s a radical shift not just in philosophy but technique and, for those who favor sophisticated, Old-World-style wines, one that’s well worth the extra effort.

While grapes grown on the valley floor are covered with a daily cooling fog that protects them from harsh sunlight, grapes grown at altitude get no respite from the rays. “Higher elevations mean you’re closer to the sun, with more sunlight available, as you are typically above the fog line,” says Chris Carpenter, winemaker for Lokoya, which produces four different Cabernet Sauvignons from high-altitude AVAs. “Sunlight changes the concentration of flavor, driving it ever higher.”

Mountainside soils are unique, too. Glenn Hugo, senior winemaker at Calistoga’s Girard Winery, says that “mountainside vineyard sites tend to have thinner, less fertile topsoils, often resulting in less water-holding capacity.” While that may sound inauspicious, Hugo notes that this type of environment “stresses the vines in a good way, adding depth, aromatic complexity and richness of mouthfeel to a wine.”

“Hillside winemaking requires a heightened attention to detail, so you can find the correct balance of extraction,” says Mondavi, who produces the M by Michael Mondavi Cabernet Sauvignon blend from the family’s Animo Vineyard, on Atlas Peak.

The best mountain-grown wines use a lighter pressing, to limit the concentration of tannins, while cold fermentation helps maintain harmony and structure. And almost every Napa winemaker specializing in Cabernet takes style cues from Bordeaux, with French oak barrels in high demand. “Mountain wines tend to have a lot of back-end tannin, so you need a barrel that will fill the middle texture,” says Mondavi, who favors barrels with lower-temperature toasting regimes “to add roundness and aromatics,” such as soft vanilla and spice notes, instead of high-char barrels, which lend pronounced smoky and caramelized flavors.

And while the right mix of geography, conditions and technique can create wines of exquisite balance and complexity, like anything raised on a mountain these wines are vigorous—overpoweringly so if poured too young. But the same bold tannins and high acidity that can be severe in youth will enrich these wines for a decade or more. Opening a set of single-vintage mountain wines in 10 or 15 years will yield luscious fruit flavors, supple tannins, voluptuous mouthfeel and a youthful brightness that will belie their age, similar to the best vintages of Bordeaux or Barolo, making them well worth the investment now.

Whichever vintage you choose, don’t expect the same old Napa Valley Cab. Think of these wines as Napa, elevated, both literally and stylistically.