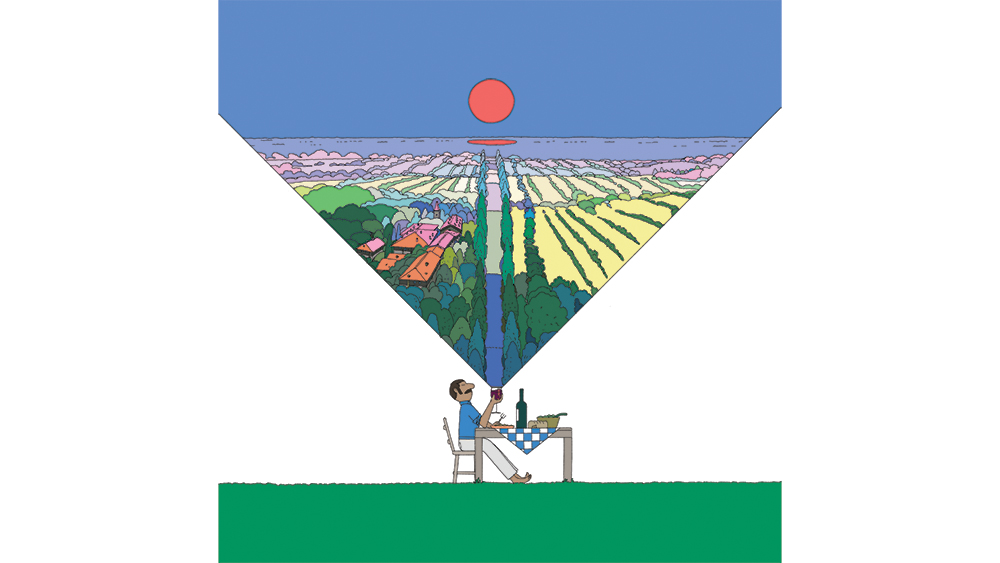 A certain faction of wine drinkers like to state (often emphatically) they drink only old-world wine. It is widely accepted that they mean bottles from France, Italy and Spain made with native grapes and specified growing and aging requirements. In Italy, this statement refers to Barolo and Brunello, two standouts among many excellent Italian regions. Some of those snobs will not taint their palates with products from Bolgheri, claiming that Italian wine made with French grapes lacks character and provenance. But they’re wrong.

For a tiny region, Bolgheri has a surprisingly aristocratic provenance and a unique microclimate that brings out the best of the fruit. But Italians have long memories and strong regional prejudices. About the size of two city blocks and lacking any hilltop views (or even a hilltop), the walled medieval village would be unremarkable were it not for the three-mile stretch of cypress trees lining its entry road or for the surrounding countryside, which is awash with vines bearing Cabernet Sauvignon, Merlot, Syrah and Cabernet Franc. Once the center of a mosquito-ridden malarial swamp, Bolgheri owes its provenance, however brief (by Italian standards), to Marchese Mario Incisa della Rocchetta, who had Cabernet Sauvignon and Cabernet Franc vines planted on Tenuta San Guido in the 1940s. He made wine only for family and friends, calling it Sassicaia, which is a reference to the region’s stony soil, similar to the gravel found in Bordeaux vineyards. At that time, planting Cabernet Sauvignon and other “Bordeaux” varieties in Tuscany, even flat, coastal Tuscany, was considered heresy.

But the marchese, like any good Italian, wasn’t one to adhere to the “rules.” He knew what he had was delicious. In the late 1960s, at the urging of his nephew Piero Antinori, he agreed to sell Sassicaia commercially. The first vintage to be offered, 1968, was released in 1972. Because it was not made with Sangiovese, the dominant red grape of Tuscany, it bore the humiliating moniker vino da tavola, or table wine. Despite this, his Sassicaia developed an excellent reputation, and other winemakers from elsewhere in Italy followed suit, planting vineyards here with Cabernet Sauvignon, Merlot and Cab Franc. Other early adopters in Bolgheri include Piermario Cavallari, who founded Podere Grattamacco in 1977; Marchese Lodovico Antinori, who established Ornellaia; and his brother, Piero, who founded Guado al Tasso. It is said the only Bolgheri native who started a winery here was Eugenio Campolmi at Le Macchiole.

In time the wines were called Super Tuscans, because bottles of such high quality deserved a much better designation than table wine. While the name Super Tuscan is now used to describe red wine from anywhere within Tuscany made with grapes other than Sangiovese, only vintages made by the 65 wineries in the specified region around Bolgheri may be labeled Bolgheri e Bolgheri Sassicaia Consorzio di Tutela DOC. (The vineyards of Sassicaia are their own official subzone.) But the name Bolgheri may soon be more important than the Super Tuscan moniker, if it isn’t already to those who know.

The area surrounding Bolgheri is low-lying, like Bordeaux, and fine gravel is found throughout the region’s sandy soils. It’s the long days of sunshine and proximity to the cooling effects of the Mediterranean that have the strongest impact on the grapes grown here. Wine from Bolgheri is noted for its combination of power and elegance. While most viticulturists and winemakers in the area consider the region too hot for Sangiovese, the widely varied microclimates within Bolgheri DOC appear to be perfect for growing grapes that came from elsewhere but are now clearly at home here.

The Antinori vineyards in Tuscany.  Photo: Courtesy of Marchesi Antinori

The major testament to Bolgheri’s importance as a winemaking region is the number of prominent oenophile families from other areas in Italy who established an additional winery here, such as Piedmont’s Angelo Gaja with Ca’ Marcanda, Veneto’s Allegrini family with Poggio al Tesoro and the Frescobaldi family’s purchase of Ornellaia in 2005. And while most Italian consumers are not going to spend $800 on a bottle of Masseto, Ornellaia’s 100 percent Merlot-based big sibling that is now produced at its own winery, there is growing national (as well as international) enthusiasm for the more accessible offerings from Bolgheri. “Interest is increasing, and people are generally interested in the ‘Bordeaux’ [style] produced in the area. In short, there is interest and there is curiosity,” Jacopo Cossater, an Italian wine journalist who also works with e-commerce, tells us.

Tannic structure and acidity add long cellar life to Bolgheri wines, which retain their value and fetch high prices at auction. Along with Tenuta San Guido and Ornellaia, Le Macchiole is considered one of Bolgheri’s crown jewels. Le Macchiole Messorio, made with 100 percent Merlot, was one of the first single-variety wines produced in the region. The 2013 shows arresting intensity of dark fruit with anise and black olive notes; it clearly has another 12 to 15 years of drinkability ahead. The opulent 2015 has flavors of black cherry, cassis and coffee bean, while the 2016 shows refinement and restraint.

Each vintage at Ornellaia is given a name that represents the qualities of the growing season and finished wine. Ornellaia 2018 La Grazia Bolgheri Superiore is named for the “balance of symmetry, proportion and harmony” of the vintage. A blend of mostly Cabernet (40 percent) and Merlot (51 percent), it’s intense in the mouth, with flavors of dark plums, anise and hillside herbs.

Tenuta San Guido Sassicaia remains a blend of Cabernet Sauvignon and Cabernet Franc. While Sassicaia 2011 is drinking wonderfully right now, the 2016 vintage is considered one for the record books, and its flavors of ripe cherry, black currant and clove will remain in full force for years to come. The 2018 is also one to lay down; it will be another four years before its tannins begin to mellow and let notes of black currant, cedar and violet shine through.

Despite its relatively recent emergence on the wine scene, Bolgheri is home to outstanding wines that testify to its position in the pantheon of revered wine regions not just in Italy but in the world at large. Get a case or two now, if you can.

When they are not at home in New York City or southern Spain, Mike DeSimone and Jeff Jenssen, aka the World Wine Guys, devote their time to chasing the grape harvest around the globe.