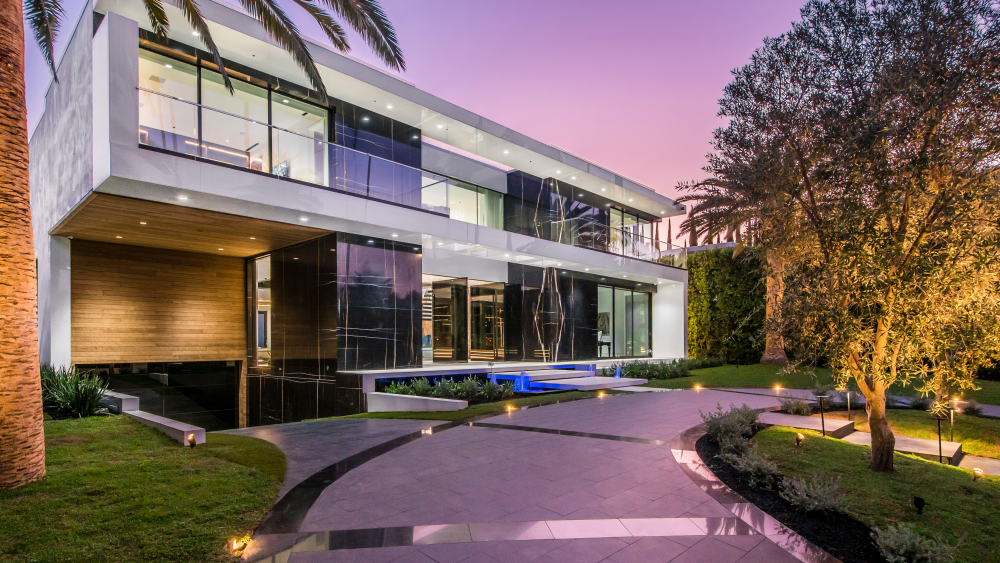 If it’s a state-of-the-art car gallery you’re after, consider this California mansion the answer. Not only does the property come with its own flashy automotive display—complete with a wrap-around projection screen backdrop and turntables—but, for a price, the developers will also get you a rare Porsche or Ferrari to fill the space.

Designed by Roman James—a sought-after architect whose work shattered Beverly Hills records in 2014 with a $70 million sale to the creator of Minecraft—the five-bedroom, ten-bathroom home occupies 16,450 square feet in the heart of Beverly Hills Flats. Should it sell at asking price, it’ll be another record under the builder’s belt, this time as the most expensive sale in the exclusive Flats neighborhood.

The car gallery with the McLaren, Aston Martin and Porsche offered with the listing.  Photography by Joel Dantro

What justifies the lofty price tag? More than just a spiffy garage, as it turns out—the 521 N. Canon address also has a Fendi-designed kitchen, a living room with an Hermes chandelier and an elevator lined with (what else?) crocodile leather. Other unique design touches include a driveway paved with quartzite, to match the building’s glass and marble façade.

The master bedroom, meanwhile, takes up 3,000 square feet all on its own, with two adjoining bathrooms and expansive walk-in closets. Down the stainless-steel staircase, an office and library space houses a hidden movie theater behind one of the bookshelves.

The living room with Hermes chandelier.  Photography by Joel Dantro

And, like the secret room, some of the mansion’s most luxurious amenities aren’t visible to the naked eye. The property is equipped with a rare, cutting-edge Delos wellness system: Darwin. The technology creates and maintains conditions designed to enhance overall health, from water filtration and air purification to acoustic calibration and circadian lighting.

Darwin works discretely in the background, but if you’re looking for a more active wellness experience, the address also boasts a pool with swim-up bar, a downstairs wellness room and spa and a fully-equipped gym.

Cool, but back to the up-for-grabs autos. The choice marques are courtesy of the relationships that developers Yasser Khalifa and Essam Ali have nurtured. They include a 2019 Aston Marton Vantage with red interiors, a 2016 Ultraviolet Porsche GT3 RS, a 2015 McLaren 650S and a 1988 Ferrari Testarossa. “The home’s garage was built for a car enthusiast, and these cars fall in line with that dream,” the developers tell Robb Report. “If the buyer is interested in any or all of them, they have the option to purchase.”

Ready to live the dream? The property is listed by Compass agents Sally Forster Jones, Janet Muradian and Shauna Walters. Check out some more interior and exterior shots, below:

The courtyard.  Photography by Joel Dantro

The entryway.  Photography by Joel Dantro