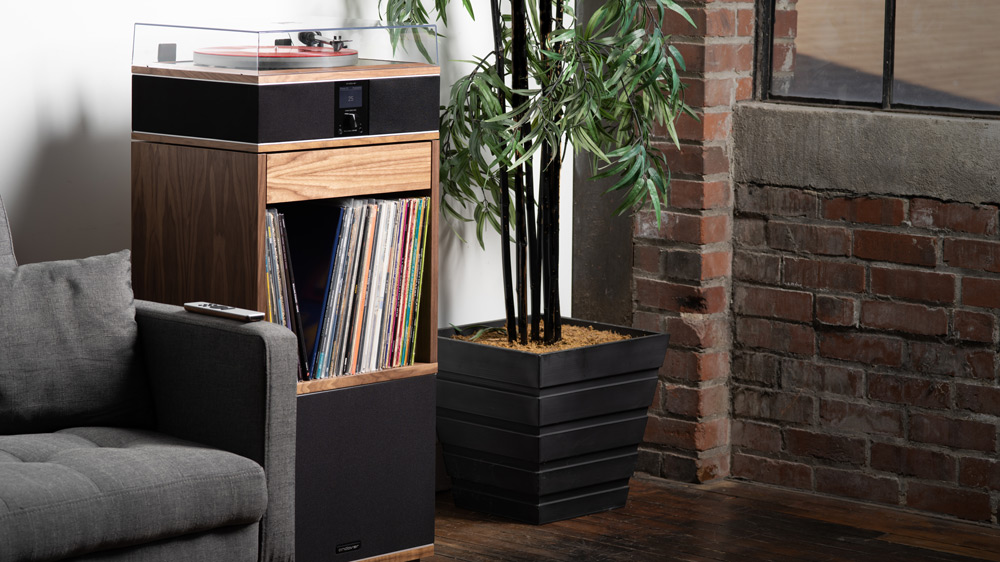 It’s easy for hi-fi lovers to become seduced by the wonderful—and wonderfully expensive—gear that makes up the world of high-end audio, let alone complete systems that can cost as much as a supercar. To everyone else, such passion and the pleasures derived are a bewilderment, because realistically, most people just want to hear music from a good-looking, great-sounding system scaled to a normal domestic environment. And, a system that allows fiscal sanity to prevail is a major plus.

All that is possible, thanks to a wealth of compact wireless systems that feature digital streaming, and some that even play the occasional CD through built-in speakers. But until now, those seeking a turntable-based, one-box system have had nothing of quality to choose from.

If vinyl has been in the back of your mind, or you just rediscovered a couple of orange crates full of records from college, then Andover Audio’s Model-One Turntable Music System, at $1,999, is a super solution. Its clean mid-century(ish) design is contemporary and compact, with a footprint scarcely deeper than an LP, 18-inches wide and less than nine inches tall; perfect for a Nelson bench or side console.

The turntable, sourced from Pro-Ject and based on its Debut Carbon Esprit SB, is perfectly respectable, and comes with a carbon-fiber tonearm and a pre-mounted Ortofon OM2 Silver MM cartridge. But it’s what’s inside the tidy cabinet that truly impresses: four 3.5-inch aluminum-diaphragm woofers and two tweeters—Air Motion Transformer designs—create a stereo image, driven by 150 Class D amps. There’s also Andover’s proprietary IsoGroove Technology that eliminates feedback and resonances that can cause sonic mischief when placing a turntable adjacent to speakers.

The turntable comes with a carbon-fiber tonearm and a pre-mounted Ortofon OM2 Silver MM cartridge.  Photo: Courtesy of Andover Audio.

In addition to the phono source, the system features Bluetooth 4.2 with APT-X wireless streaming to connect to your smartphone or computer, a dedicated input for an outboard Wi-Fi streaming device, and a subwoofer output. And a walnut-trimmed remote controls the entire system.

The Model-One Turntable Music System paired with an optional storage stand and the Model-One Subwoofer.  Photo: Courtesy of Andover Audio.

Especially cool are the optional stands with the identical footprints as the Model-One. These double as record cabinets that each store 100 LPs. An upper stand with built-in drawer, finished in walnut ($299), can sit on a lower cabinet ($199) to create a 41-inch tall tower that holds 200 records.

For added bass authority, the Model-One Subwoofer ($799), which uses two 10-inch drivers driven by a 150W Class D amplifier, can be placed aside the system, or can replace the lower cabinet to create one sleek tower that does it all.