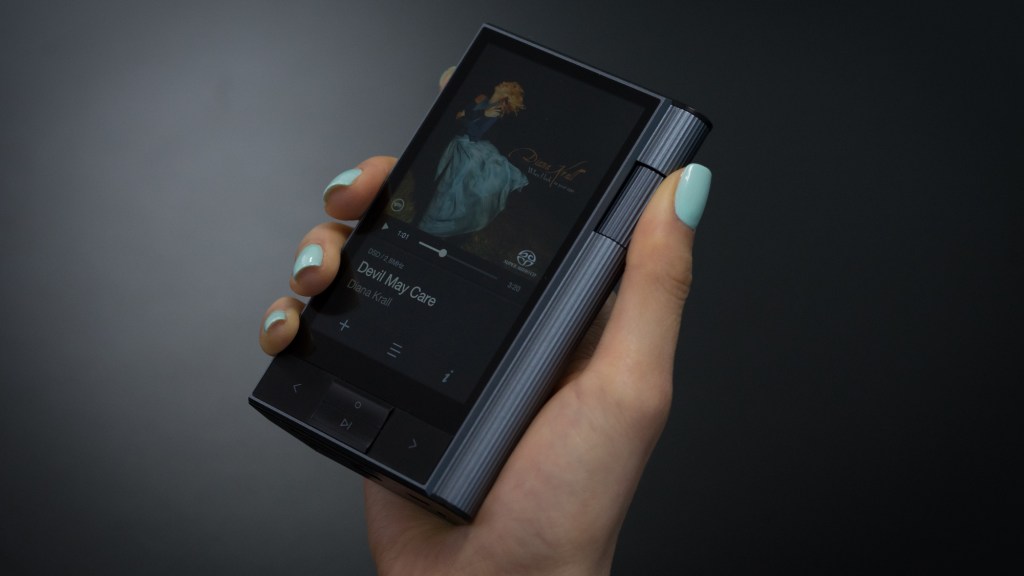 MP3s may have brought portable digital music into the mainstream in the early 2000s, but true high-fidelity audio remained inconvenient for years. That is, until Astell&Kern nearly single-handedly pioneered the high-end portable music player segment with the release of the AK100 in 2013. Today, despite expanding competition, the company is still leading the charge, maintaining a steady stream of new releases, including the new KANN digital audio player.

I had the pleasure of spending the last several weeks with the KANN and have found it to be a singular hi-fi experience. It eschews hype and an overabundance of features, with all its elements focused on its sole purpose: to play high-resolution audio in an extraordinary way.

Designed for versatility, the KANN features include a large battery, wireless capabilities, external memory slots that can increase storage to up to 832 gigabytes, a high-power headphone amplifier output, and a line-level output. Both outputs are available as single-ended and balanced, and the line output creates an easy connection to external amplifiers. This, as well as the ability to function as a USB Digital to Analog Converter (DAC), allows KANN to seamlessly integrate with home systems.

Its software and touchscreen are not particularly remarkable, but the device feels physically substantial and well-constructed. Despite being nearly an inch thick and three inches wide, its silky anodized metal form (available in silver or blue) fits comfortably in the palm. The cylindrical volume control set flush with the right side of the device gives great tactile feedback. The overall appearance is stylish and the interface is functional, and serves the purpose of music listening without distraction.

Sonically, KANN is very precise. The preferences of discerning listeners vary, but to my ears, this is a device for those who like clear sound, taut bass, and obvious instrument separation. On the other hand, you will not find very much midrange bloom, tube-like warmth, or any romantic coloration. That said, the sound is not clinical; rather, it is resolving, transparent, and revealing. Midrange issues notwithstanding, the KANN offers an iron grip on lower bass control and crystalline, detailed purity in the high frequencies. The player is quite unforgiving to low-quality audio files, but when listening to high resolution PCM and DSD formats, I found myself drawn in by its presentation, hearing details I had previously overlooked.

The bass control was especially evident when playing my 24-bit copy of Subway Gawdz, the latest album from New York subway buskers Too Many Zooz. I was floored by the immediacy of the bass drum. The second track intro demonstrated a blossoming depth to the sound that I had never heard before, followed by snappy, clean instrument separation when the saxophone entered the mix. Taut, controlled bass is more uncommon in portable hi-fi than clean highs, and the KANN handles both exceptionally well.

The mastery of high frequencies became apparent when hearing the sparkle of the triangle in a DSD file of the second movement of Mahler’s 6th, recorded by the SF Symphony Orchestra under Michael Tilson Thomas. The overall presentation of the string section was exceptional, but it is truly rare to hear the delicate sound of a triangle assert itself, gleaming with surprising intensity. Regardless of genre, I found the bass and treble control of the KANN to be superior. The soundstage and instrument separation are also something special and a testament to Astell&Kern exacting commitment to quality.

Ultimately, the $1,000 KANN delivers on its simple but lofty promises. Astell&Kern has produced a luxury audio product that checks off all key boxes for audiophiles: long battery life; great, audio-first features; tons of storage capacity; and aural excellence. It might not be a fit for those prioritizing midrange or looking for tube-style warmth, but for the hi-fi enthusiast who appreciates precise fidelity, deeper listening experiences, and the flexibility offering by portable device—KANN may just fit the bill.