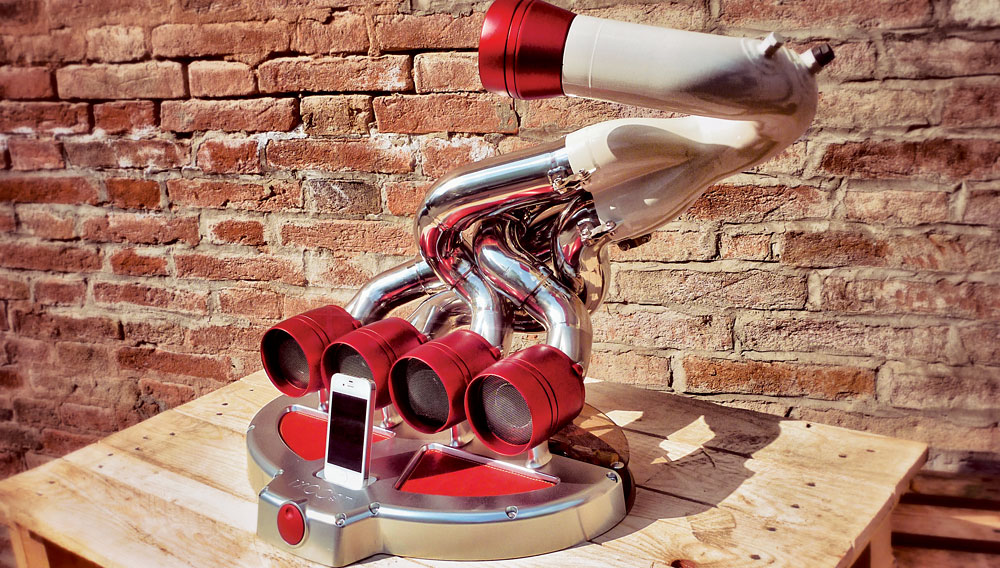 Sure, there are a number of exceptional iPod and iPhone docking stations on the market—created by companies like Bang & Olufsen, McIntosh, and Polk Audio—but until recently not one was designed to appeal specifically to auto enthusiasts. That changed in August 2011, when Matteo Panini, an inventor from Modena, Italy, held a sports car’s exhaust manifold in his hands and saw not just the inner mechanics of a high-performance automobile, but the medium to deliver musical sound with supercar flair. He presented his idea to Mirco Pecorari, an Italian aircraft designer, who sketched out a blueprint for the audio system. Together, they founded iXoost (www.ixoost.it) and built the first prototype in March 2012.

It’s fitting that such a design should come from Modena, a city nicknamed the “Land of Engines”; the headquarters for both Ferrari and Lamborghini are less than 10 miles from the city’s center. To build each iXoost model, Panini begins with a solid block of aluminum and then, using five-axis machines, turns and mills authentic exhaust manifolds taken from the bellies of Ferraris, Renaults, Maseratis, Bugattis, and other auto marques. When finished, each station comprises a main base accented by the “sound horns” and an exhaust manifold, which Panini converts into the sound box for a 140-watt subwoofer sealed inside a retro-styled bell. Customers first must choose between three iXoost models—8-, 10-, or 12-cylinder designs—which start at prices ranging from €5,000 to €6,800 (about $6,700 to $9,200). From there, customers can further personalize their stations’ aesthetics, choosing from a variety of colors, metallic finishes, types of leather, even the specific Allen screws recessed into the base.

The late orchestra conductor Herbert von Karajan once declared that “the sound of a 12-cylinder Ferrari is like a melody which no conductor would ever manage to reproduce.” The statement inspired Panini to create an iXoost app, which includes coordinated graphics and interchangeable themes to match any iXoost model. It also offers audio files that showcase the sound of various supercar engines revving at high speeds.

Not content to rest on their laurels, Panini and his team continue to improve their machine. They’ve recently implemented a better subwoofer and have plans to debut a carbon fiber version this spring. With bespoke orders arriving all the time, Panini never lacks for motivation. However, when he needs a fresh dose of inspiration, the Italian inventor reflects on the ingenuity and success of the late Enzo Ferrari, who once declared, “the sound of a 12-cylinder engine must be listened to as if it were a symphony.”