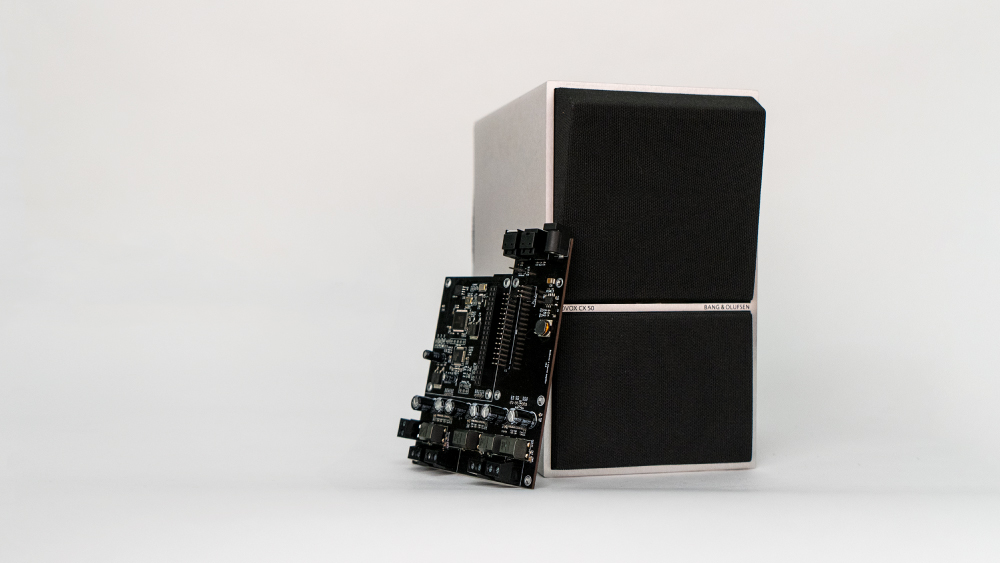 Bang & Olufsen, a company that has become known as much for its chic styling as its auditory excellence, has partnered with Swiss brand HiFiBerry on a project that is decidedly geekier than one would expect from the lifestyle-focused brand. The Beocreate 4 Channel Amplifier is a piece of hardware that owners can install on vintage Bang & Olufsen speakers to allow them to use modern wireless standards to stream music.

Before we dive right in to the unit’s capabilities, let’s lay a little groundwork. Released five years ago, the Raspberry Pi—essentially a simple, single-circuit-board computer—became a darling among the DIY set, as the incredibly cheap device allowed them to experiment with using it for all sorts of things, from old-school videogame emulators to media and web servers to almost anything you can dream up. HiFiBerry found a specific niche within the community by building modules—digital-to-analog converters (DACS), amplifiers, and the like—that could then be attached to a Raspberry Pi to upgrade its audio capabilities.

The Beocreate 4 Channel Amplifier is the company’s most ambitious product to date, cramming a DAC, a digital signal processor (DSP), and an amplifier onto one board. Even when not connected to a Raspberry Pi, the module can still function as a standalone digital amp that can output a total of 180 watts of power. When attached to the Pi, the DAC is able to process 24-bit/192 kHz signals across four channels. However the DSP is the big draw, as it facilitates support for WiFi and Bluetooth, allowing you to stream digital music directly to your 40-plus-year-old speakers.

One of the big points B&O and HiFiBerry stress is the ease of installing the new module, and that’s true, at least when it comes to popping it onto the Raspberry Pi. But to properly install it in your vintage speaker is another matter. That will require stripping wires, glue gunning, sawing, and even soldering. So, as we warned at the top of the article, this is a product aimed squarely at the geeky end of the audiophile spectrum—one that gets a thrill from a DIY project done well.

The Beocreate 4 Channel Amplifier is compatible with the Beovox CX100, CX50, and, RL2000, among others.  Photo: Courtesy Bang & Olufsen

For those with enough curiosity and bravery, the Beocreate 4 Channel Amplifier is available now through HiFiBerry’s website. It is priced at $190, but goes up to $278 if you buy the bundle, which also includes a Raspberry Pi, a power supply, an SD card slot, and more. That said, if this all sounds like a hassle, you can always pick up the BeoLab 50 we covered back in August.