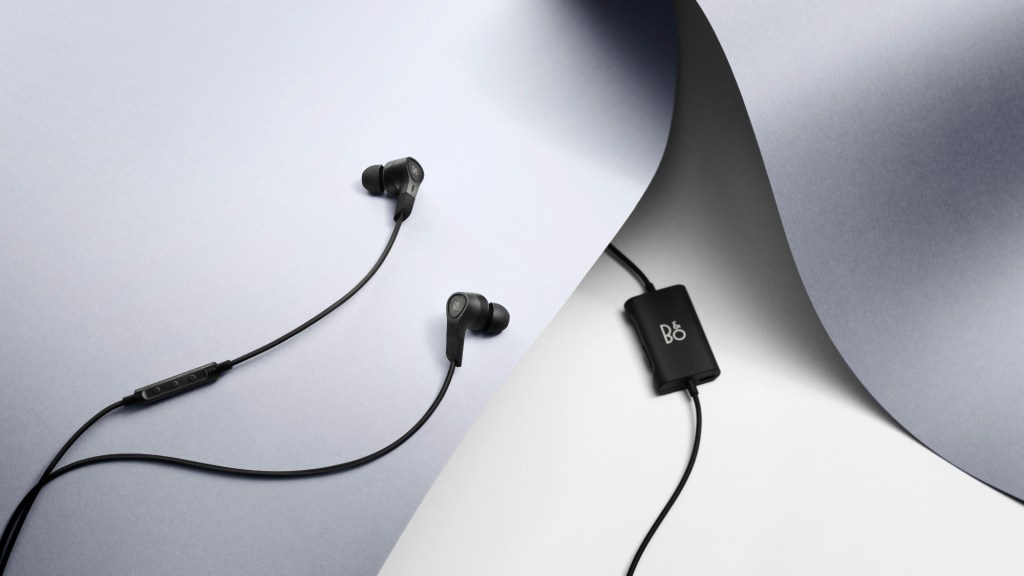 Seeking a little peace and quiet on a long-haul flight or simply at your favorite coffee shop? The active noise-cancelling (ANC) BeoPlay E4 is the latest pair of earspeakers from Bang & Olufsen’s portable audio sub-brand. Though not Beoplay’s first noise-cancelling earbuds (that distinction belongs to the H3 ANC released in 2015), the E4s represent a great leap forward in the brand’s mastery of the technology—and they deliver the high-quality audio for which the Danish brand is known.

The first thing you notice when listening to the E4s is the impressive degree to which they block outside sounds. Many audiophiles prefer over-ear headphones for active noise cancellation because they also provide additional passive noise isolation (physically blocking sound) by the very nature of their design, but the E4’s supple Comply memory-foam tips do an admirable job of blocking out noise even without the ANC turned on. (It also come with four different-sized sets of silicon tips for those who prefer them, but I found they tended to slip and became a bit uncomfortable during long listening sessions.)

When the ANC is turned on, the world largely fades away, with any low, droning sounds outside replaced by only the slightest hint of white noise from the sound-cancelling system. However, like all active noise-cancelling devices, the effect is not perfect. Don’t expect to turn a busy shopping mall into your own private isolation chamber.

ANCs eliminate noise by capturing ambient sound with a microphone, processing the signal, and then using the speaker to project a sound wave with the opposite waveform, canceling out the original. The E4s, unlike their predecessors, utilize a hybrid active noise-cancelling system (the same technology used in the brand’s top-of-the-line H9 over-ear headphones) that collects the signal from a pair of microphones on each earbud and uses the dual signals to create more accurate counter waveforms, thus increasing the effectiveness of the ANC, especially on the low end. In fact, the E4s cancel out up to 15 decibels more low frequency noise than the H3 ANC.

One of the handiest new features is Transparency Mode, which allows the wearer to discretely listen to the outside world without removing the earpieces. Activated by the same switch on the battery pack (pictured above) that turns on the ANC, the function mutes—but frustratingly does not pause—whatever is currently playing and projects the exterior noise picked up by the microphones through the speakers. I was surprised by how useful I found the feature; it made it easy to slip back into reality if something caught my wandering attention or to just exchange quick pleasantries with someone on the street.

All of these features are nice but ultimately unimportant if the earbuds don’t deliver superior audio quality. However, the E4s met and exceeded of my expectations. While their performance at the high end of the frequency range (they top out at 16,000 kHz) is perfectly satisfactory, the earbuds really shine on the low tones (which goes down to 20 Hz), especially when the noise-cancellation is turned on. The overall sound has remarkable richness in the low- and mid-range and impressive clarity across its entire spectrum. These are earbuds that you’ll want to wear every day, not just pull out of a drawer before a flight.

Like all active noise-cancelling headphones, the E4 requires an external battery to power the feature. While these are often bulky and obtrusive (the battery pack of the H3 ANC was shaped like a small hockey puck), the battery pack on the E4 is sleek and rectangular with rounded sides, making easier to slip into a pocket and less of a visual distraction. With a full charge, the battery can run the ANC for 20 hours, plenty of time to last the duration of a transcontinental flight or even a visit from in-laws.

The headphones has a small unlabeled remote with three buttons on the left cord that can be used to control volume and playback. While the upper and lower buttons were fairly self-explanatory, it took a few tries to get used to the playback controls, which requires certain numbers of presses of the middle button to do things like pause and skip. It’s optimized for iPhones and I was unable to get the volume control to work with my phone, though the middle button did its job.

Despite a few annoyances, the overall experience of listening to the BeoPlay E4 is wonderful. Its noise reduction is on a level shared by very few other earbuds, and its sound quality is exhilarating. The $250 headphones are available now and come in only one color: a discrete and ever-stylish matte black.