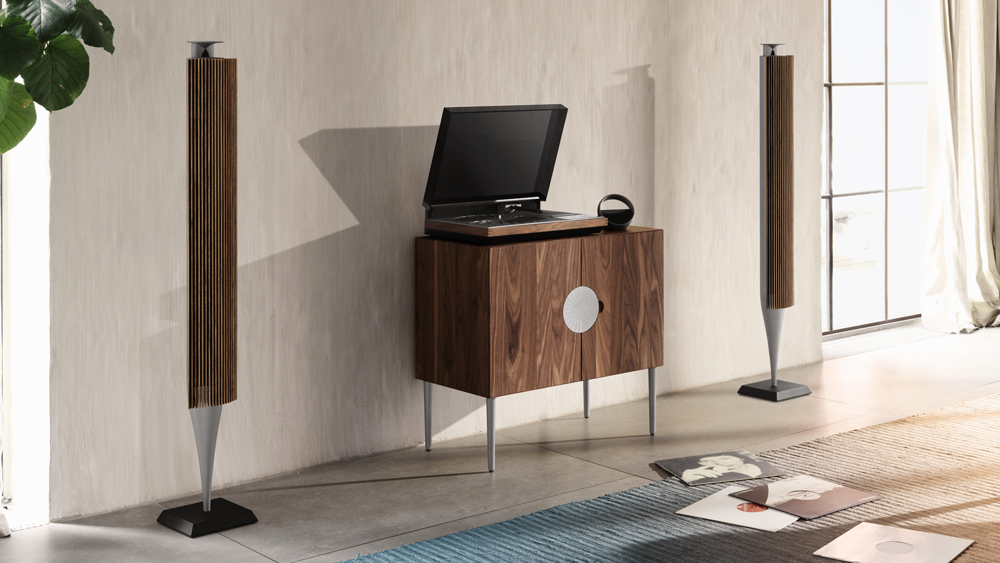 For more than half a century, the luxury Danish audio brand Bang & Olufsen has changed the face of industrial design with its components, loudspeakers, televisions and even telephones that have found their way into homes and museums around the world. Bang & Olufsen’s first cutting-edge creations were the work of one man, designer Jacob Jenson (1926 to 2015), whose Beolab 5000 system came to market in 1968 and set the stage for 234 products over the course of his 27 years with the company.

One such audio component was the Beomaster 1900 receiver from 1976, a wedge-shaped sculpture with touch-sensitive switches in an era of components with fussy knobs and clunky casework. But the most iconic of Jensen’s designs was his Beogram 4000 Series turntable from 1972, recently shared as the first product in Bang & Olufsen’s Recreated Classics Initiative, a program to re-introduce historic designs in a limited-production series.

The limited-edition Beosystem 72-22 is Danish-Modern design at its best.  Photo by Jeppe Sørensen, courtesy of Bang & Olufsen.

It’s a rare product that achieves true classic status, retaining its design integrity over the decades while still having the power to surprise new generations of onlookers. The Beogram 4000 turntable is such a product, and to celebrate the 50th anniversary of the series’ launch, Bang & Olufsen is producing just 30 new, limited-edition Beosystem 72-22 component packages exclusively for North America. Each hand-built configuration features a recreated Beogram 4000c turntable, along with two Beolab 18 speakers, a Beoremote Halo remote control and a custom cabinet to accommodate LPs and connectivity components.

The Beosystem 72-22—designed by Torsten Valeur, who has worked with Bang & Olufsen since 1995—arrives in a solid walnut gift box, which cleverly becomes the turntable stand, storage cabinet and Halo remote charging station in one. The system’s 72-22 moniker refers to 1972, the date of the turntable’s original release, and 2022, the year of its recreation at the same factory—in Struer, Denmark—where the original turntable was built. Valuer has used natural walnut and anodized aluminum in what the company calls pearl-blasted, Titanium Tone finish for the turntable and cabinet; subtle updates to the oak and brushed silver-aluminum finish used on Jensen’s originals.

The Beolab 4000 Series turntables demonstrate the original engineers’ commitment to non-obsolescence, leaving unused space in the turntable’s chassis to accommodate technological upgrades that hadn’t even been invented yet. With this vacant interior volume, current Bang & Olufsen engineers have been able to incorporate a special phono preamp—ordinarily an outboard component or circuitry contained within a larger control preamplifier—invisibly tucked away within the turntable, which connects through a line signal cable to a Beosound Core streaming/distribution hub housed within the LP cabinet.

A turntable and Beoremote Halo remote control are all that sit atop the custom cabinet.  Photo by Jeppe Sørensen, courtesy of Bang & Olufsen.

From the Beosound Core, a digital signal is fed wirelessly to a pair of Beolab 18 stereo speakers through the Beolab Transmitter, also built into the cabinet. Similarly, music can be streamed from a variety of digital music services. Music can even be enjoyed in multiple living spaces through Beolink Multiroom from the Bang & Olufsen App, which can facilitate connection to other Bang & Olufsen speakers sharing the same network. Priced at $45,000, the Beosystem 72-22 is available only in North America and exclusively through Bang & Olufsen stores.