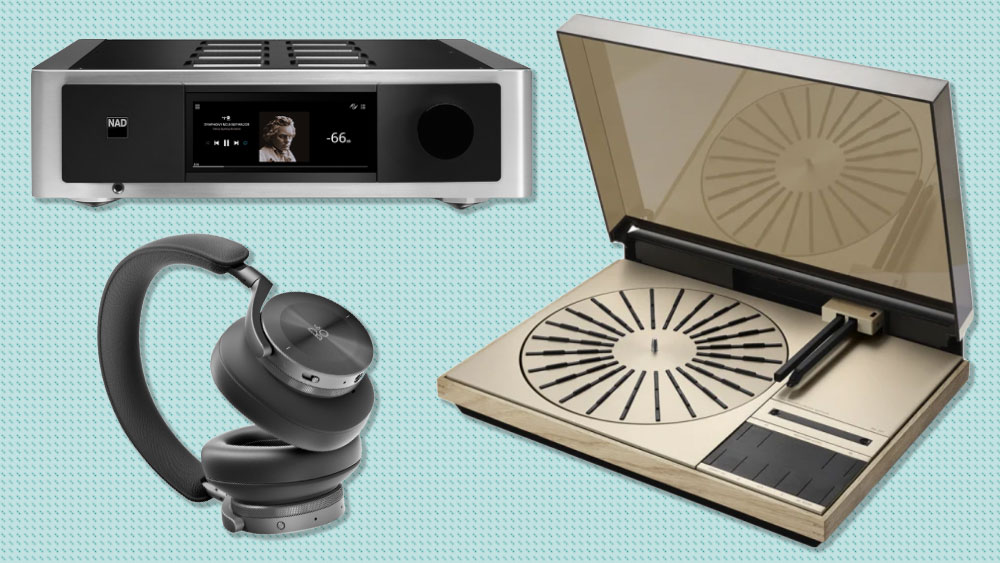 By organizing audio gear into the most basic categories—like nutrition, where whisky and steak comprise the two essential food groups—music lovers can assemble a fantastic system that fills most every need with as few as two components. With that, we’ve selected 16 pieces across four categories, featuring great gear that represent best-in-class engineering, performance and value within their price range. Each is a keeper—great today and good for the long haul. But unlike scotch and cuts of beef, where personal preference often elicits vociferous debate, we’d say it’s hard for any music lover to argue the merits of these carefully considered selections.

With more than one quarter billion headphones sold per year, it’s a shame that a mere few thousand listeners will ever enjoy the sonic experience of a pair of Stax SR-009S. Probably the best headphones on the planet, these Japanese electrostatics offer the most revealing and accurate sound of any transducer, including price-no-object, six-figure loudspeakers. They’re that good. All of a recording’s inner detail, subtle nuances and spatial cues come alive over the big Stax, which are equally revealing of upstream source components like cartridges, tonearms, and digital processors. Power them with Stax’s flagship SRM T-8000 amp ($5,800), or HeadAmp’s Blue Hawaii ($6,000), to make these Stax ’phones sing.

Certainly the best-looking wireless headphones around, the brand-new Beoplay H95 system is a premium Active Noise Cancellation (ANC) design that sounds as good as it looks. Sumptuous build quality is matched by supreme comfort, with soft, lambskin ear cushions that enclose the ear and sit easily on the head for long listening sessions. Operation is via an app-based user interface, with touch control and mechanical dials on either earpiece for volume and ANC. Battery time of up to 38 hours on one charge makes these a practical high-end ’phone for serious listening at home or on the go. Available in Black or Gray Mist colorways, these are the best sounding, highest quality wireless, noise-canceling phones on the market today.

You can spend a lot more for something to stick in your ear, so at a certain point, it makes sense to consider a pair of audiophile-quality headphones for serious listening at home, like Sennheiser’s own HD 800 S. But when you’re on the go, nothing beats the convenience of in-ear wireless sound, and Sennheiser’s CX 400BT True Wireless hits the sweet spot for value and impeccable audio quality with its 7mm drivers and a built-in equalizer. The minimalist design, available in black or white, fits discreetly in the ear and is good for well more than all-day wear, offering 20 hours of battery life—7 hours on a charge and a further 13 hours with the compact charging case.

With the resurgence of vinyl comes a plethora of turntables from manufacturers new and old. TechDAS is both; its inventor designed Japan’s legendary Micro Seiki ’tables and has returned for an encore with TechDAS, of which the new Airforce III Premium is in the middle of the range. Like the bigger Air Force ’tables, it holds the LP to the platter with vacuum suction, and its small size belies its 120-pound weight and rock-solid reproduction of the music in vinyl’s delicate microgrooves. Paired with the U.S. distributor’s own Graham tonearm (from $7,500), all that’s needed is a stellar phono cartridge and digital dreams may become distant memories.

Few would argue that the most beautiful turntable ever made was from 1972. With its tangential tonearm and elegant trim in aluminum and wood, it was years ahead of its time. Following a global search for excellent originals, the manufacturer is offering 95 examples of the Beogram 4000c Recreated Limited Edition turntable in recognition of the company’s 95th anniversary. Unlike the original, each completely refurbished turntable incorporates a built-in phono preamplifier and comes with a new MMC moving-magnet phono cartridge. Each unit is numbered and presented in a hand-crafted, solid oak box.

If the lure of vinyl has a little record-spinning devil whispering into your ear, there is no better way to dive into LP collecting than one of Pro-Ject’s entry-level turntables like the Essential III. The European-made deck comes set up with a one-piece aluminum tonearm, pre-mounted Ortofon M10 moving-magnet cartridge and one-piece dustcover. Importantly, a built-in switchable phono preamp lets users plug the ’table straight into any music system, and a USB output lets you digitize your record collection. Of course, more costly combos will extract even more from the grooves, but the Essential III makes scratching the LP itch easy, fun and almost free.

Our favorite Bluetooth speaker from British hi-fi manufacturer Naim Audio packs a serious sonic wallop in a box just 8.5 inches square. The Mu-so Qb 2nd Generation serves up music-streaming services wirelessly via Bluetooth, or via a hard-wired Ethernet connection. Control is easy, via a dial with proximity sensor that lights up when approached, a Naim app, or a new remote-control handset. Internal drivers by French loudspeaker manufacturer Focal produce a three-dimensional soundstage with effortless dynamic range and authoritative bass that simply shouldn’t be coming from such a small box. Mu-so works equally well near a wall, in a corner, or in free space. It even does duty as an alarm clock, enabled through a settings menu in the Naim app.

Weighing about 22 pounds apiece and roughly the size of a shoebox, Kef’s LS50 Wireless II loudspeakers take the virtues of their revised LS50 mini-monitor, the LS50 Meta, and adds wireless convenience in a stand-alone design that brings music to rooms where inconspicuous audio gear is the order of the day. Impressive, near full-range sound comes from Kef’s unique Uni-Q driver, a concentric design with an aluminum dome tweeter bulls-eyed in a mid-bass cone. Power comes from internal amps; 280 wpc for the mid-woofer, and 100 wpc for the tweeter. Importantly, a built-in streaming preamp and Roon-ready DAC make this an all-in-one system. For ultimate fidelity, add available stands and a Kef subwoofer to achieve a sound that rivals much more costly and elaborate systems.

Few loudspeakers have the history and following of the LS3/5A, a mini-monitor developed by the British Broadcasting Corporation in 1975 and made under license over the years by 12 British manufacturers, the latest model being Graham Audio’s Chartwell LS3/5A ($2,990/pr). The tiny shoebox-sized speakers are remarkable for their sonic accuracy and ability to pinpoint images in space. There’s something to be valued about an audio classic that has stood the test of time and remains a standard by which others of its ilk are judged. Paired with a beefy little integrated amp and used for near-field listening in a small room, the musical experience is hard to beat.

Their sound is huge and so are the four door-sized panels (two per side) that recreate a musical event like few other loudspeakers can. Rendering detail with micro-precision, the Magnepan MG30.7s ($30,000/pr) are lightning-fast, totally transparent and without any box-like coloration, due to the nature of their ribbon/quasi-ribbon membranes, which unlike conventional dynamic cones, are nearly weightless. Yet their bass punches with overwhelming weight and slam. More remarkable is that they compete favorably—and outperform in many ways—speakers at ten times their price. It would be unwise to spend more without hearing these first.

Unlike pro users and recording studios, audiophiles have been slow to adopt active loudspeakers, despite the simplicity, shorter signal paths and amplifier optimization they bring to the table. ATC is popular with music industry pros, and its floor-standing, 120-pound SCM50ASLT is a no-compromise, three-way, full-range tower in the middle of its lineup. Each driver—woofer, soft-dome midrange and tweeter—has its own MOS-FET amplifier delivering 200, 100 and 50 watts, respectively. Power up the speaker, connect a source component and think of all the electronics and cables you’ve cut out of the audio chain, without sacrificing any of the sound.

The most significant new piece of hi-fi gear in 2020? Without doubt. While it’s generally agreed that 2020 was a year best forgotten, one exception is the NAD Masters M33, the most accomplished single-box component among hundreds of high-end hi-fi offerings over the past dozen or two months. What it does is remarkable, upping the ante on its predecessor, the M32, with advanced Purifi Class D amplification, a not insignificant sonic improvement. This all-in-one 200 wpc amp is also a full-featured preamp with moving-magnet and moving-coil phono preamplifier, as well as DAC and full streaming capability. Just add speakers and go, or front-load a turntable and, for an ultimate two-box system, pair the matching NAD Master 50.2 Digital Music Player, with 2TB storage and CD ripper/transport. Better only comes by a factor of 10.

This smartphone-sized jewel is the brand’s flagship portable player for users of top-flight in-ear headphones from Etymotic and the like. The SP2000 features two Asahi Kasei DACs in dual-mono configuration, and supports 32-bit/786kHz and native DSD512 files for highest fidelity playback, and even supports MQA files. It delivers ample power through either balanced or unbalanced outputs, while 512GB of internal memory rivals that of an elephant. Continuous playback time of up to eight hours makes it ideal for music on the go, housed in an elegant machined copper or stainless steel case.

With today’s best integrated amps delivering performance on par with good separates, Danish manufacturer Gryphon raises the stakes with the Diablo 300 ($16,000). Its predecessor was so good that it enjoyed a 10-year run, and its top-line integrated betters it in every way. This high-current, Class A/B design has massive power supplies, and delivers 300 wpc into 8 ohms, nearly doubling down to 2. Optional modules for DAC ($6,000) and an exceptional MM/MC phono stage ($2,250) make it a one-box solution for powering the most serious loudspeakers. Exquisite industrial design features black anodized aluminum and an acrylic touch panel, with a sophisticated volume attenuator that reminds users what quality feels—and sounds—like.

While high-end music servers are plentiful, the Aurender A30 is a sonic overachiever with uncommon functionality and superior build quality. A true one-box solution, it performs as a caching music server and streamer, and importantly, has a D-to-A converter and full-function MQA decoder technology built in. The A30 will also rip your CDs, store up to 10TB of files internally, and showcase metadata on a full-width LCD. It even has a dedicated headphone jack for dynamic ’phones; essentially it’s a preamp/front end for an all-digital system.

From the company’s beginning in 1970, Audio Research has championed vacuum tubes for their ability to bring reproduced music closer to the ideal. While components in their Reference Series represent a no-holds-barred assault on sound, their Foundation Series components bring the glowing goodness of tubes closer within reach. The LS28 Line Stage ($8,500) is a Class-A design with ample switching flexibility. Pair it with the PH9 Phono Stage ($8,500) to bring a turntable on board. With the DAC9 Tube D-to-A converter ($8,500), just add a streamer or one of ARC’s own CD players and listeners have a complete tube front end. The VT80 SE Stereo Amplifier ($9,500) makes 75 wpc with a quartet of ARC’s preferred KT150 tubes, for a system that will hold its own for decades.