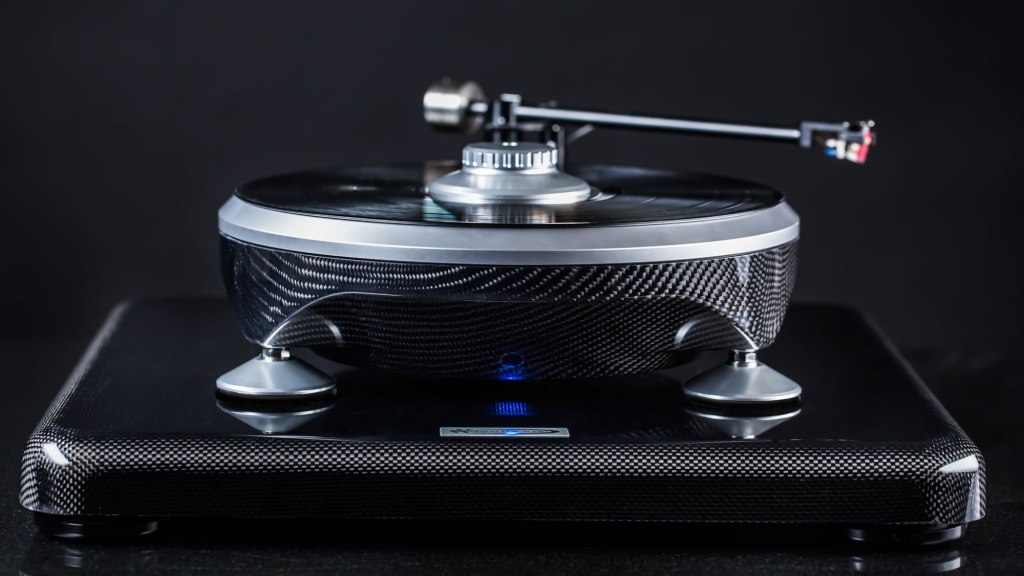 Over the past three decades, the popularity of direct-drive turntables—ones in which the record platter is connected directly to the motor—has waned among analog audiophiles in favor of belt-driven systems. But Colorado-based hi-fi brand Grand Prix Audio (GPA) seeks to revive the enthusiasm for direct-drive with its latest creation, the Parabolica, which made its first public appearance recently at the Los Angeles Audio Show.

Its distinctive carbon fiber exterior speaks directly to the racecar motif embraced by Grand Prix Audio, who borrows manufacturing materials and practices often used in the creation of supercars to design its high-performance turntables. In fact, the even the turntable’s name comes from that of a particularly challenging turn at the famed Monza racetrack. Like Monaco 2.0, the Parabolica’s predecessor, GPA utilized a carbon fiber monocoque design for extra rigidity and resonance damping. This base supports a 13-pound aluminum platter, which is driven by a brushless DC motor. Despite opting for an internal speed controller rather than an external speed box, the Parabolica is said to approach the sonic achievements of its predecessor thanks to some key design choices from the manufacturer.

Grand Prix’s design solves the critical challenges of turntable design: it has a drive system that maintains perfect speed, and the design dissipates the mechanical noise of the drive system. One benefit of direct-drive is that the system can constantly update the motor with information about the accuracy of its speed. During a single revolution of the platter, Parabolica takes measurements nearly 150,000 times, allowing the motor to adjust in real time.

The bearing is factory sealed and mechanically decoupled from the drive system, which works in conjunction with the carbon-fiber chassis design to isolate the resonance normally produced by a motor. The result is an ultra-quiet, extremely stable drive system that does not interfere with the music.

The Parabolica’s removable quick-release armboards make swapping out tonearms a breeze. And while the $16,500 price of the base turntable does not include a tonearm, Grand Prix will custom-machine an armboard to fit the tonearm of the buyer’s choice. The nice addition of capacitive touch sensors means there are no buttons to push; just tap the sensor and start spinning records.

The Parabolica was made available for purchase earlier this month from select dealers in the western United States.