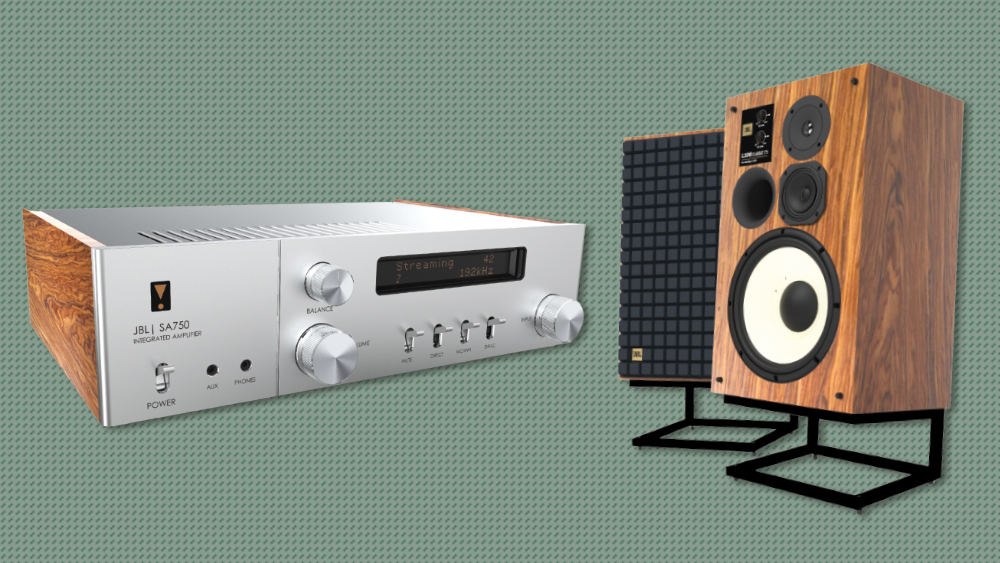 Audio brand JBL turns 75 years old this year. That’s old, but not as old as founder James B. Lansing would be—119 years—if he were alive today to hear the gear bearing his initials. To celebrate its diamond anniversary, JBL is offering two commemorative pieces to its lineup of components—a limited-edition loudspeaker and an integrated amp.

But first, some backstory. Harman Kardon acquired JBL in 1969, and in 2021, Harman International continues to lead the industry in the field of acoustic science, with a respected research and development team whose facilities in Northridge, Calif., rival the best in the world. Among Harman’s brands, JBL remains at the forefront with its Synthesis products, which include the timeless Classic series loudspeakers. To the design-conscious audiophile with an eye for mid-century style, the most famous historic JBL design is the iconic L100, launched 51 years ago and popularized by the Maxell cassette-tape ad featuring a longhaired listener hunkered down in Corbusier’s even more-iconic LC2 armchair. He’s being blown away by the sound, played through a lone JBL L100 that sits forlornly on the floor.

After decades of the L100 being out of production, JBL reintroduced that well-loved design in the fall of 2018, and now, celebrates the brand’s 75th anniversary with the JBL L100 Classic 75 Loudspeaker in a limited run of 750 numbered pairs. Distinguished by a black Quadrex foam grille and genuine teak wood veneer, the speaker resembles the 1970s original with its design and driver complement but incorporates entirely new transducers, crossover, wiring and cabinet construction. The cabinet also includes a rear-mounted commemorative plaque bearing the signature of the principal system engineer, Chris Hagen.

Like the originals, the L100 Classic 75 uses three drivers. A 1-inch titanium dome tweeter, firing through a waveguide with an acoustic lens, is mounted directly above a 5.25-inch cast-frame, pure-pulp cone midrange that handles frequencies above 450 Hz to 3.5 kHz. The tweeter and midrange, offset to the right of the woofer below, can be fine-tuned with high- and mid-frequency attenuators positioned to the left of the tweeter. A front-firing port tube vents the bass-reflex enclosure. Solid bass to 40 Hz comes from a 12-inch, cast-frame woofer distinguished by JBL’s signature white, pure-pulp cone.

Technical enhancements of the L100 Classic 75 include an improved woofer suspension, a revised crossover network and the ability to bi-wire with dual sets of gold-plated binding posts. A set of dedicated JS-120 floor stands is included. Priced at $5,500 per pair, the new Classics are shipped in a wooden crate embellished with limited-edition artwork.

The SA750 Integrated Amplifier from JBL.  Photo: Courtesy of JBL.

Making the most of its anniversary, JBL is also releasing the new SA750 Integrated Amplifier. Priced at $3,000, it’s the perfect power source for a pair of L100 Classic 75 Loudspeakers. If it looks retro, that’s because its thick, milled-aluminum faceplate and knobs are a direct take on the SA600 and SA660 integrated amps from the 1960s and ‘70s. Back in the day of fondue parties and Nehru jackets, a JBL integrated would have been right at home in the swankest living room. But again, its retro-look conceals the capabilities of this full-featured integrated.

Combining a phono stage for MM and MC cartridges, a preamp and power amp in one chassis, its versatility goes way beyond, incorporating a DAC with full MQA file decoding and a host of streaming and connectivity options. Sound, especially lower frequencies, is optimized via built-in Dirac Live room calibration.

The SA750 Integrated Amplifier includes a phono stage, a preamp and power amp in one chassis.  Photo: Courtesy of JBL.

Power comes from Class G amplification, operating in Class A mode at low output and switching to efficient Class G when more power is needed, delivering 120 w into 8 Ohms and 220 w into 4 Ohms—plenty of juice to drive the efficient L100s (with 90dB sensitivity) to rock-concert levels. The L100 Classic 75 Loudspeaker and SA750 Integrated Amplifier will be available in April.