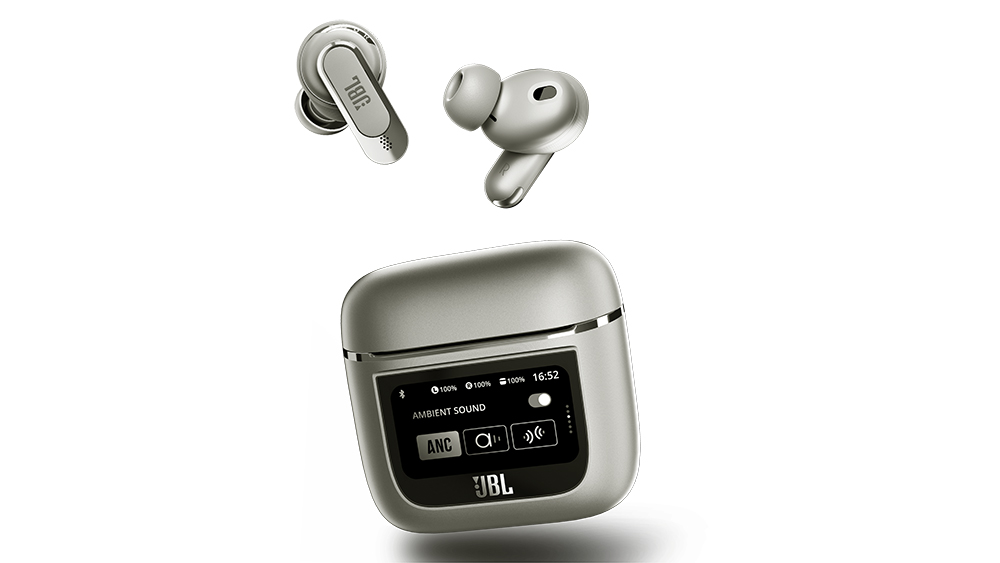 JBL just unveiled a new pair of wireless earbuds, but it’s the accompanying case that will likely excite technophiles.

The Tour Pro 2 earbuds sit inside what the American audio giant claims is the world’s first smart earbud charging case. The nifty gadget is fitted with a 1.45-inch LED touchscreen that brings all the controls to your fingertips.

By tapping the display, you can manage your music and customize your earbuds. On top of that, the small but mighty device allows you to receive calls, messages and social media notifications in real-time without touching your phone. Think of it as a smartwatch with the added ability to charge your buds.

Speaking of which, the Tour Pro 2s are Bluetooth 5.3 LTE compatible and feature adaptive noise cancellation, immersive JBL spatial sound, customizable ANC and 10mm drivers. The earbuds are also equipped with six mics that guarantee “crystal clear audio” on calls. JBL says you can expect 40 hours of total music playback, with the earbuds capable of running for around 10 hours and a further 30 hours coming from the case.

In addition, JBL has released a set of over-ear wireless headphones. The new Tour One M2 cans don’t come with a fancy smart case, but JBL claims the pair “combines JBL’s best-ever hybrid True Adaptive ANC with JBL Pro-tuned drivers.” Weighing just under 10 ounces, the compact cans promise much of the same tech as the earbuds, but come with 40mm dynamic drivers, four mics and 50 hours of battery life.

The JBL Tour One M2 Headphones in champagne.  JBL

“I am delighted with what we have created, in particular the smart charging case of the JBL Tour Pro 2,” Dave Rogers, president of Harman Audio’s Lifestyle Division, said in a statement. “In our pursuit of new user-centric features, we haven’t ignored the essentials, however, as we continue to elevate the audio experience.”

The JBL Tour One M2 Headphones in black.  JBL

Billed as JBL’s most powerful and feature-rich headphones yet, the Tour Pro 2 wireless earbuds and the Tour One M2 cans are priced at $249 and $299, respectively. Both models are available in either black or champagne, because, well, looks matter, too.