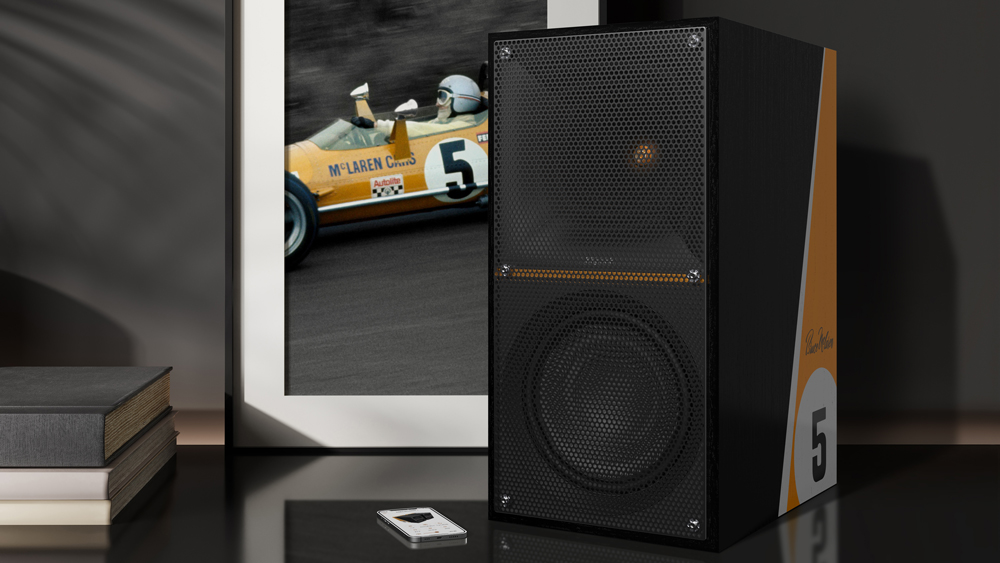 Paul Klipsch founded his eponymous loudspeaker company in 1946, 17 years before Bruce McLaren founded his motorsport team in 1963. Today, the two names are legends in their respective arenas, and their brands have collaborated to develop the Legends Series that pairs Klipsch’s big, take-no-prisoners sound with the curb appeal of any McLaren F1 race car. The new Klipsch capsule collection is instantly recognizable, proclaiming its presence even before the music starts, with McLaren’s signature No. 5 speedmark and searing Papaya Orange accents on the cabinets and high-frequency horns.

New Zealander Bruce McLaren won the United States Grand Prix in 1959, becoming the youngest grand prix winner at the age of 22—a record that stood for four decades. He and co-driver Chris Amon also went on to take the official first-place standing in the iconic 1966 Le Mans trifecta while driving No. 2, the black Ford GT40 MkII. That same year, Bruce McLaren entered his first Formula 1 race. Tragically, McLaren died in 1970 at the age of 32 during testing at Goodwood Circuit. Team McLaren continues today, and remains one of the most successful in motorsport history, winning 20 Formula 1 World Championships, 183 Formula 1 grand prix races, three Indianapolis 500 contests and—with its first attempt—the 24 Hours of Le Mans with the F1 GTR in 1995.

Celebrating a history of success for both brands, the Klipsch|McLaren Legends Series comprises four distinctive products. The One ($349) is a 60 watt, powered speaker with two 2.25-inch full-range drivers and a 4.5-inch woofer. Bluetooth connectivity and a 3.5 mm analog input make it a versatile workbench-top system, all in a single box.

The Nines are powered monitors ($1,899 per pair) that have built-in amplification, 192 kHz/24-bit decoding and the ability to make prodigious sound from a small enclosure with one 8-inch woofer and a proprietary Tractrix horn for upper frequencies. Offering the advantages of an all-in-one system, the Nines feature Bluetooth connectivity, plus an integrated phono preamp, HDMI-ARC, digital optical, analog RCA and USB inputs.

The Klipsch Forte McLaren Edition ($10,998 per pair) is a four-driver system that has a proven track record with audiophiles who like the effortless sound and high efficiency offered by the proprietary Klipsch Heritage designs. It uses a K-702 horn-loaded midrange driver firing through a modified Tractrix horn, a 1-inch titanium-diaphragm high-frequency driver and a 12-inch woofer.

Firing from the rear of the cabinet is a substantial 15-inch passive radiator to enhance the already impressive low-frequency response. Made at the Klipsch factory in Hope, Ark., these components feature grain-matched veneer with accents in papaya-colored vinyl.

As engine builders have long averred, “there’s no substitute for cubic inches.” Those who agree will want the Klipsch MCL-905 McLaren Edition ($15,998 per pair), which is Klipsch’s professional-grade cinema speaker that has been adapted—for the first time—for use in a two-channel audio system. It uses a 3-inch titanium-diaphragm compression driver (firing into a K-691 horn for high frequencies) and dual 15-inch K-45 composite woofers. Only 25 pairs will be produced, making this a rare centerpiece of any high-performance system.