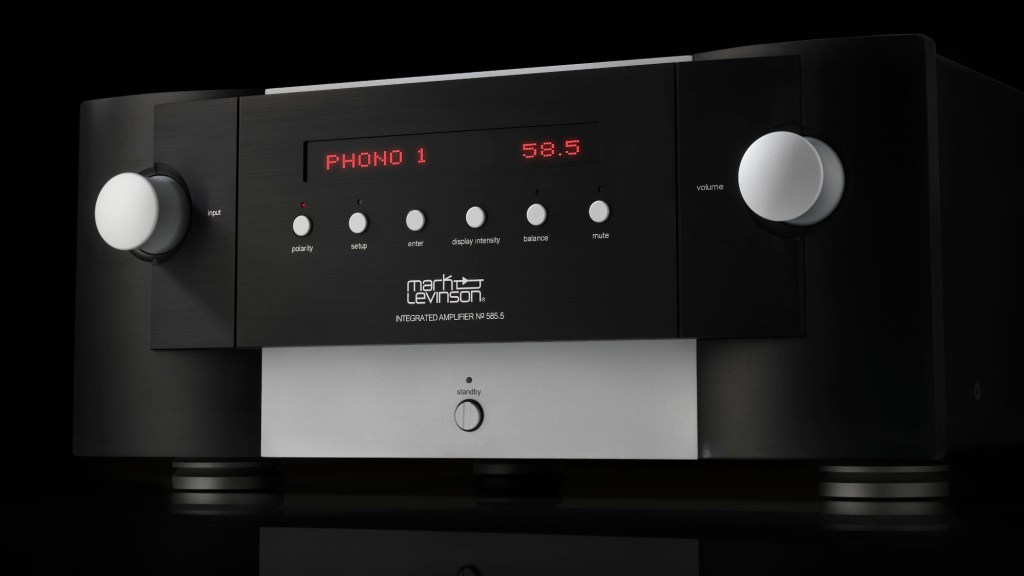 Among the big news coming out of the CEDIA home technology show last week in San Diego was the announcement of an upgraded version of the No. 585, Mark Levinson’s integrated amplifier. In addition to a number of tweaks and new features, the main selling point of the appropriately named No. 585.5 is the addition of the Pure Phono stage module found on the brand’s No. 523 and No. 526 preamplifiers.

In audio engineering, the phono stage acts as an intermediary between a record player (Mark Levinson’s 40th anniversary No. 515, for instance) and the built-in amplifier to boost the relatively weak signal from the turntable up to a level that can be properly utilized by the amp. Mark Levinson’s Pure Phono accomplishes this task while using Class-A amplification throughout (sacrificing some power efficiency in the name of high fidelity) and minimizing signal noise in the gain stages. The system’s front panel or remote control can be used to adjust the phono stage’s four gain settings, resistive- and capacitive-load settings, and infrasonic filter according to the user’s preferences as well as the needs of his or her record player.

The Pure Phono uses dedicated stereo RCA inputs to connect to a turntable, but the No. 585.5 also has four analog inputs and six digital inputs capable of accommodating high-resolution digital files including 32-bit PCM and DSD. At the other end of the line, the integrated amp is capable of putting out 200 watts per channel into 8 ohms and 350 watts into 4 ohms.

Other changes to the 585.5 include the aforementioned upgraded remote and a new three-piece anodized aluminum top cover that brings it in aesthetic alignment with the rest of the brand’s 500 series. The upgraded integrated amp is priced at $16,000 ($4,000 more than its predecessor) and will be released in the fall.

Sennheiser Has Unveiled a New Version of Its Beloved Audiophile Headphones