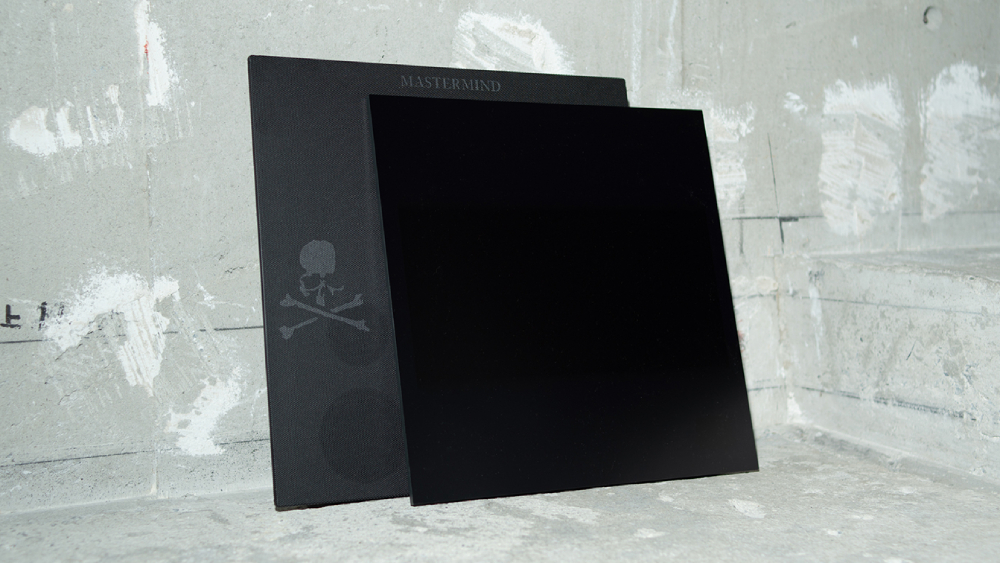 A new collaboration between mastermind Japan and Cotodama brings new meaning to the term audio-visual.

While the sound of music is paramount, the two Japanese firms decided that lyrics shouldn’t be left out of the listening equation. Enter the inky Lyric Speaker Canvas. Comprised of two offset squares, one panel provides robust audio output while the other spells out the lyrics to the song that’s playing in real-time. Together, their slender profile resembles record sleeves leaning against one another, an intelligent nod to how music can transform physical space.

A bonus of this particular profile is that it can be slotted just about anywhere from, the edge of a desk to the corner of a bookshelf. You’ll never have to struggle with hauling it from location to location or rearranging it in a given room, and its sleek aesthetic will only add to the decor.

The rear sound-emitting board of the Wi Fi-enabled unit is marked with a Mastermind-branded skull and crossbones in a tonal hue. But appearance aside, it was engineered by a team of top sound designers from Tom’s Lab who were able to achieve an acoustic effect, which is said to give music plaid through the new speaker an in-person quality. To make the most out of the piece’s slim dimensions, it also takes advantage of rear reflection, so the wall it’s leaning against becomes a co-resonator that helps amplify the music.

But the lyrics are given just as much consideration. More than simply scrolling across the screen, the text actually changes how it’s displayed based on the genre of music being played over the speakers to create something akin to a mini art installation whenever it’s switched on. With it rhythmically keeping pace with your track of choice, the device becomes just as amazing to view as it is to hear.