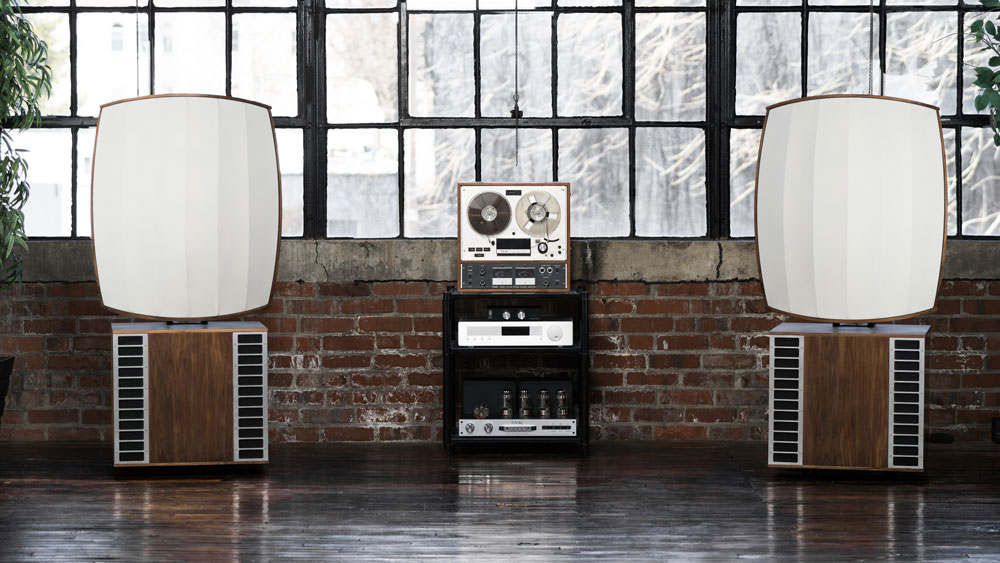 In many ways, the small world of high-end loudspeakers parallels the world of contemporary supercars. Within the automotive realm, designers aspire to establish new performance benchmarks through a variety of engineering solutions, using everything from a W16 engine to an electric motor, or novel solutions not previously seen.

Achieving ultimate sound reproduction remains an elusive goal, and to get there, speaker designers have devised a multitude of ways to “move air.” Most loudspeaker designers—even on their flagship models costing five and six figures—employ electrodynamic drivers (cones and magnets) to reproduce the entire audible frequency spectrum. Other designers take a less-traveled path, swearing by planar, ribbon, electrostatic, horn and other esoteric designs. (Corona plasma tweeters, anyone?)

Regardless of the technology, the objective remains the same: achieve a flat frequency response, wide dispersion and deliver instantaneous transient response, all while presenting a manageable impedance in a speaker sensitive enough to work with amplifiers rated at 100 watts or less. Reliability is essential, and of course, speakers need to have some eye appeal. After all, even when they’re not making music, an imposing pair of loudspeakers commands attention, often dominating an interior as the main visual element. They had better look great.

Pennsylvania-based MC Audiotech was formed by audio industry veterans Mark Conti and loudspeaker designer Paul Paddock, who between them share 60 years of combined experience. Priced at $35,000 per pair, their Forty-10 is a statement loudspeaker, and meets every requirement to run with the “big dogs.” And just like some canine breeds, they have a look that is entirely unique, reflecting a Mid-Century aesthetic that would be right at home in a Julius Schulman photo of a Case Study House interior.

A two-way design, its double-curved Spaced Array houses 10 WBLS transducers atop a base containing two 18-inch pro-sound woofers in the trademarked Folded Cube configuration. They are not small (4.5 feet high x 3 feet wide x 2 feet in diameter), nor light (175 pounds each). Cabinets are available in satin walnut veneer with aluminum brightwork and off-white grille cloth, or figured maple with black metalwork and brown grilles. What’s behind those grilles is responsible for the musical magic.

The controller for the Forty-10 speakers.  Photo: Courtesy of MC Audiotech.

The MC Audiotech Forty-10 is named for the 10 Wide-Band Line Source (WBLS) transducers, which represent 40 years of development by Paddock. The designer explains, “My original invention, patented in 1985, married a twin-cylindrical diaphragm driven at its junction by a vertical wire loop located between a twin-magnetic gap voice coil system. This device was commercially offered by the Linaeum Corporation from the late 1980s through much of the 1990s. The Impact Airfoil Loudspeaker later employed a slightly different driver with a single membrane—again my design. Since that time, I have continued to develop and improve the concept, resulting in a WBLS transducer which exhibits greatly enhanced bandwidth, sensitivity and reliability.”

The rear view of the controller.  Photo: Courtesy of MC Audiotech.

According to its designer, “No other audio transducer realizes the heretofore theoretical ideal.” Crossed over at 100 Hz, the WBLS array extends to 20k Hz, and below, twin woofers tackle the 20 Hz to 100 Hz region. The nominal impedance of upper and lower modules is 4 Ohms, and the efficiency of each, 96 dB and 93 dB, respectively, means that a 15-watt amp will handily power the array, and a sturdy 100-watt amp will get a firm grip on the woofers.

The Forty-10 is named for the 10 Wide-Band Line Source transducers, which represent 40 years of development.  Photo: Courtesy of MC Audiotech.

Attentive audiophiles will note that bi-amplification is a requirement. For this, MC Audiotech supplies a hybrid passive/active analog crossover to feed the amplifiers; a passive circuit heading to the array and an active one to tailor bass output. This allows listeners to use their favorite low-power vacuum-tube amp with the array, and a traditional solid-state amp to take care of low-frequency business.